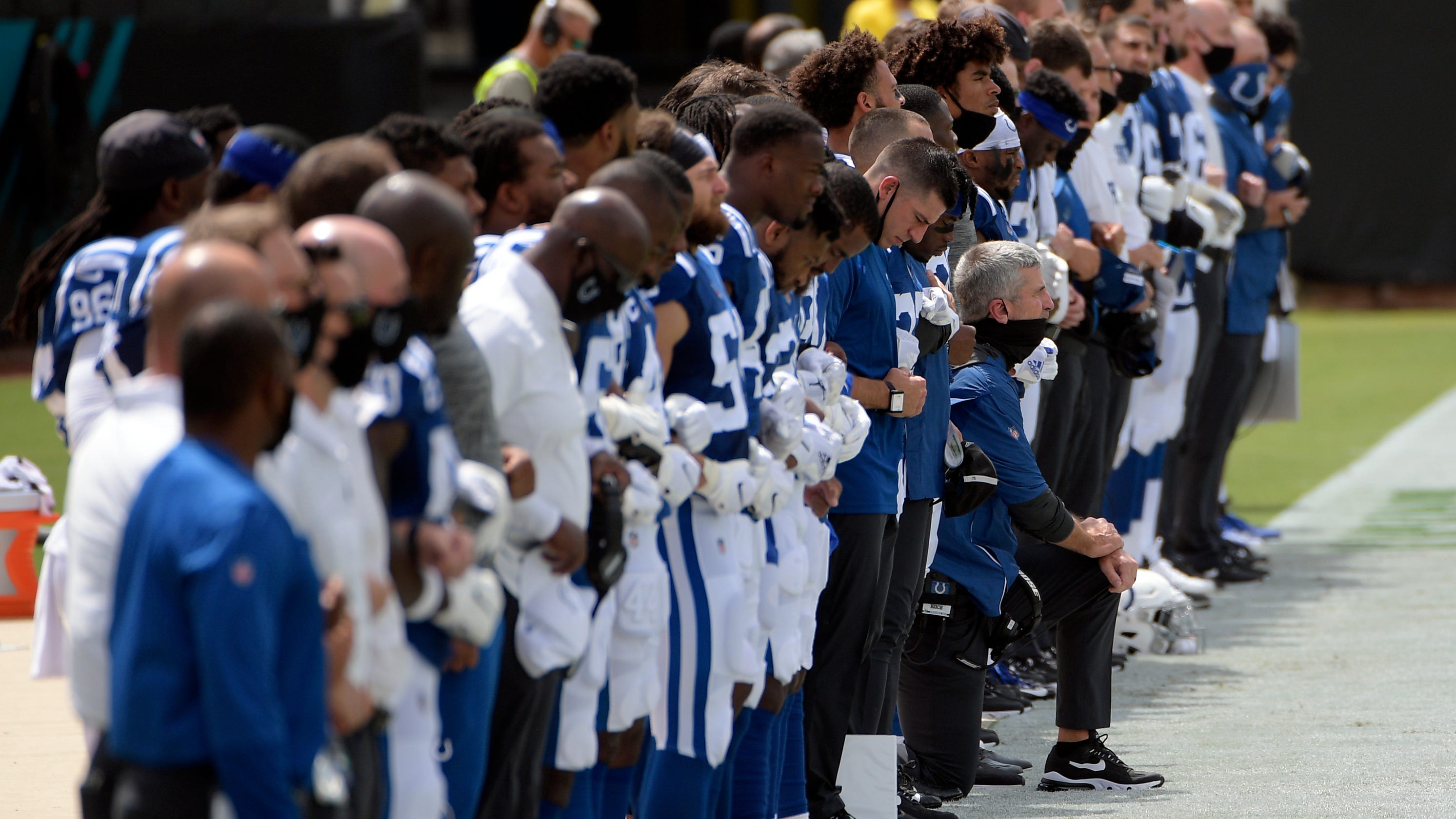 As his players stood and linked arms, as he prepared to take the knee heard ‘round the world on Sunday, Indianapolis Colts coach Frank Reich’s mind was racing. He knows what is happening around the country. NFL fans are furious with players for kneeling for the national anthem. They’re tuning out their team, turning off the television, nodding their heads as President Donald Trump calls players who kneel “traitors.”

And there’s Frank Reich, the white head coach of a football team in a red state – and he’s about to kneel? He knows what will happen next.

“I understand that there will be a backlash,” Reich was telling me later Sunday, after the Colts’ 27-20 loss to the Jaguars. “Which is why it’s really important, when you make a decision to do something as an individual or a team, you’ve got to have a lot of conviction behind it. I was comfortable with the conviction we had as a team, and I had as an individual, that it was the right to do.”

What happened Sunday was planned well in advance, with Colts releasing a statement moments after the image of Reich kneeling for the anthem played on television screens around the country. In the statement, the Colts highlighted what they were – and were not – doing on Sunday during the anthem.

What they were doing: “(Making) a statement on behalf of the Black communities in our state of Indiana,” the statement reads, “but also on behalf of all Black communities from where our players and coaches call home. Our intent is to bring attention to the issue of systemic racism and the injustice inherit therein. We also wanted to demonstrate a symbolic gesture of how we believe meaningful change happens.”

What they were not doing: “Not protesting the flag, the anthem, or the men and women who wear the uniform,” the statement reads. “The timing of this action is meant to highlight that the presence, power, and oppression of racism remains inconsistent with the unity and freedoms of what it means to be an American.”

As for the optics of their head coach kneeling?

“It is not a posture of defiance,” the statement reads, “but rather one of humility – taken by the white community – to acknowledge the injustice and inequality that is present, and to find the courage and resolve to make the changes needed.”

Will that clear it up? Not for everyone, no. But it could change some hearts, and that was Reich’s goal.

How this all happened, why it was Reich on a knee while his players – most of them Black, yes – were standing, is a story. And it’s a story Reich is telling me in whispers. Because he’s sitting at the front of the team bus, about to leave TIAA Bank Field for the airport, and his players are walking past. And he doesn’t want to say any of this too loudly.

Because the truth is just so ugly.

‘Not their problem to fix’

The Colts considered various options for their pregame demonstration. Around the NFL, some teams knelt for the anthem. Some stood with arms locked. The Jaguars were one of many to skip the anthem entirely, staying in the locker room. In Atlanta, the Falcons and Seattle Seahawks came upon this novel approach: Take a knee as the Falcons’ game-opening kickoff flew toward the end zone.

At one point, as the Colts were brainstorming ideas, it was Reich who suggested that he be the one to kneel. It would be a posture of humility, the symbolism unmistakable. The players loved the idea, and decided to go forward with it.

“It means a lot,” Colts linebacker Darius Leonard was saying about Reich’s willingness to take the heat of a red state. “It’s why we stand behind Coach Frank, and he stands behind us. We’re in this thing together.”

Asked about the symbolism of a white coach kneeling, Leonard minced no words.

“We’re not talking to the Black community,” he said. “We’re trying to speak to the white people who are in power.”

On the bus at TIAA Bank Field, I’m asking Reich if he knows what Leonard had said. He doesn’t, not until I tell him, but he’s agreeing with his linebacker.

“That’s 100% what this is,” Reich says, and he’s not speaking quietly, not yet, because these words are so easy. “What I have heard from our players, over and over again, and what I have heard from the Black community, over and over again, is this: If the Black community could fix this problem of systemic racism, it would have been fixed a long time ago. But it’s not really their problem to fix.

“I’m not trying to shame the white community or throw guilt on people. Just merely saying: ‘OK, we got to where we are in our country’s history. Let’s evaluate where we are. Is this just? Is this the right thing? Let’s not be passive, which has been easy for all of us – including myself – to fall into.”

Reich has more to say, but he’s about to lower his voice. Because his players are starting to board the bus. And these words, these facts, aren’t easy to say.

On the bright side, people weren’t as angry as I expected.  I put a poll on Twitter, asking fans their opinion of what the Colts did during the anthem, offering three choices. Of nearly 3,000 responses, only 22% called it “disrespectful.” The rest went for “not powerful enough” (13%) or “just right” (65%).

That was not a scientific poll, but those results are hopeful. They make me think that maybe, just maybe, folks in a red state are ready to hear what Frank Reich is saying quietly from the front row of the Colts’ team bus.

“People can change,” Reich is telling me, speaking at regular volume. “It’s hard, but people can change, and I do believe we can love and serve people and help people grew. That’s one side of the equation. The other side is systemic racism.”

“I read an article,” he’s telling me, “that walked me through the example of a white guy and a Black guy: Same zip code, same income, same credit score. So why does the percentage of people who get loans for a house greatly favor the white person over the Black person? That kind of thing is systemic. The premise was, wealth creation starts with owning a home. You build equity, sell it, buy another house, and build more equity. You pass away and leave it to your kids, they get more equity, and so on and so forth.

Reich thought he knew about systemic racism, but then a Black suspect named George Floyd died under the knee of a white police officer named Derek Chauvin in Minneapolis. Reich talked to his team about the protests around the country, including here in Indianapolis, and realized he knew so very little.

“I feel I have made some attempts (to understand) before, feeble as they may have been,” Reich’s saying, “but I told our team: ‘I’ve learned more in the last six months than I did the previous 50 years.’”

After hearing from his players, Reich went to Google and typed in the phrase “systemic racism.” He went to YouTube to watch videos. He read ESPN’s website “The Undefeated,” devoted to the intersection of race, sports and culture. Reich, himself an ordained minister, listened to sermons by Dr. Tony Evans, a Black pastor in Dallas. He read “The Third Option,” a book by Miles McPherson, founder of The Rock Church in San Diego, its pages devoted to offering “hope for a racially divided nation.”

Reich is trying to understand, and his Black players are determined to help him – and help you – see their side.

Or, we could all just get angry.

“Get the son of a (bleep) off the field!” our president yelled once about Black players kneeling for the anthem.

What about a white coach who kneels? What do we – as a city, a state, a fan base of an NFL team – do with that?