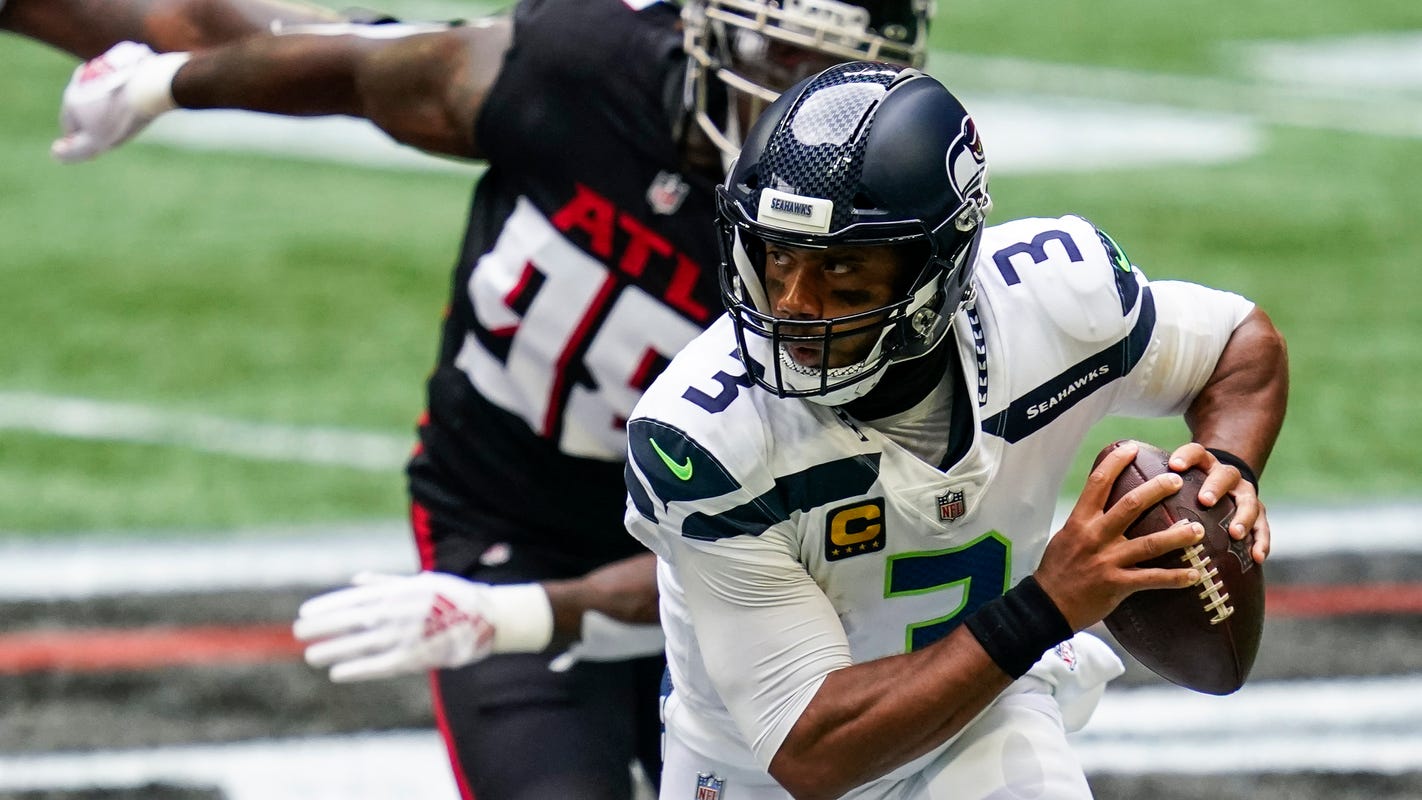 1. Black Lives Matter. End Racism. It Takes All Of Us. Still trying to understand how any of that stirs controversy …

1a. Speaking of which, how about Indianapolis Colts coach Frank Reich taking a knee during the national anthem? Talk about being an advocate for equality.

1b. And, it should be noted, I’d expect Reich – and anyone else who knelt this weekend, including Ravens QB Lamar Jackson – to be gainfully employed in the NFL in 2021 and well beyond.

1c. But, as expected, teams and players approached pre-game ceremonies – they included “Lift Every Voice and Sing,” aka the Black national anthem, and the traditional “The Star-Spangled Banner” in Week 1 – in various ways. Some teams locked arms, while no players at all were present for the national anthem elsewhere. None of it really came as a surprise, the Miami Dolphins signalling during the week that they want action, not more words.

BREAKING NEWS: The@MiamiDolphins players will stay inside for both national anthems. They express their discontentment with what they call “fluff and empty gestures” by the @NFLpic.twitter.com/ghUktHhPt9

2. To the field … how important is a 1-0 start? Since the NFL expanded to a 16-game schedule in 1978 (minus the strike-shortened 1982 season), teams losing their opener only had a 24% chance to reach the playoffs. (Of course, this year’s postseason field has been expanded to 14 teams.)

3a. Seattle beat the Falcons 38-25, meaning Seattle is 7-0 in the Eastern time zone since last season and 22-9 in the Wilson era. Wish I’d remembered that before picking Atlanta to win …

4. If you had Bears QB Mitchell Trubisky outplaying Lions counterpart Matthew Stafford, and throwing three fourth-quarter TD passes in the process, you’re welcome to do my investing.

4a. Chicago has beaten Detroit five straight. Wish I’d remembered that before picking the Lions to win … though I also thought D’Andre Swift could catch.

5. The Washington Football Team is 1-0 all-time. Congrats to Ron Rivera and Co., who’ve endured quite a summer of headlines not of their own making.

5a. And the WFT pass rush is as good as advertised, racking up eight sacks (for minus-62 yards) on Carson Wentz and Philadelphia’s depleted O-line. Wish I’d properly weighted that mismatch before picking the Eagles to win …

6. The Las Vegas Raiders are also 1-0 all-time. Now, “what happens in Vegas” next week when the Saints “stay in Vegas” for the opening of Allegiant Stadium, aka the “Death Star.”

7. Speaking of new yards, Los Angeles’ SoFi Stadium appears to be everything it’s cracked up to be, including possession of its own Twitter account. Bummer it won’t be hosting fans – Jerry Jones doesn’t count – anytime soon.

.@SoFiStadium is ready for #SNF.

8. Eight teams are breaking out new uniforms this season … because if you look good, you play good. Right? Welp, entering Sunday night those teams were 3-4. The Patriots, Chargers and Washington won. The Browns, Colts, Falcons and Bucs did not.

9a. Burrow’s debut Sunday meant at least one rookie quarterback has started in Week 1 for 13 consecutive seasons. However, since 2003, No. 1 picks starting under center are now 0-12-1 in their maiden starts.

9b. Also, not sure Burrow should start that nascent mustache in consecutive weeks …

9c. Burrow might have emerged victorious had Cincinnati K Randy Bullock not missed a 31-yard field goal with 2 seconds remaining in the Bengals’ three-point defeat. Adding injury to insult, Bullock – he’d connected on 24 consecutive FGs inside 40 yards prior to Sunday’s misfire – appeared to hurt himself on the play.

11a. Newton also became just the second Black player to start at quarterback in New England history – he joined Jacoby Brissett – and the first to do so on opening day.

11b. Prior to Newton, the last quarterback not drafted by the Pats to win a game for them? How about Hugh Millen in 1991.

11c. Newton’s pair of rushing TDs gave him 60 in his career, making him the first quarterback in league history to reach that threshold.

11d. Props to Cam for the Chadwick Boseman tribute in the end zone.

12. Elsewhere in New England, Bill Belichick’s defense, ranked No. 1 in 2019 but ravaged by free agency and COVID-19 opt-outs this year, limited the Dolphins to 11 points and 269 yards.

13. Meanwhile, Brady lost in his debut with the Buccaneers – looking more Jameis Winston than TB12 with a pair of interceptions.

13a. However Brady did score on a 2-yard TD run at the start of the game. At 43 years and 41 days, he’s the oldest player in NFL history to find the end zone.

14. Sunday also marked the first-ever matchup of quarterbacks aged 40+. Drew Brees, 41, and the Saints got the best of Brady.

Drew Brees and Tom Brady have combined to throw 1,088 touchdown passes in their careers. That’s more than 7 NFL teams have in their franchise history. pic.twitter.com/fG2aNpfqoq

15. Play for pay: Alvin Kamara (Saints) and Dalvin Cook (Vikings) both scored a pair of touchdowns Sunday, right on the heels of each earning an NFL rarity – a lucrative contract for a running back. Kamara already appears to be spending some of that cheddar on his game-day look.

Saints’ Alvin Kamara with the all caps GRILL. 😁 pic.twitter.com/glDCPnQZd8

16. Despite their decisive loss to Seattle, I still like the Falcons as a playoff dark horse. Their Matt Ryan-led attack rolled up 506 yards on the Seahawks, three receivers exceeding the century mark and RB Todd Gurley scoring (and looking productive) in his Atlanta debut.

17. Bills QB Josh Allen finished with good numbers (312 yards, 2 TDs passing plus 57 yards and a TD on the ground) in Sunday’s defeat of the Jets, but the number of wide-open throws he misses was almost shocking. That will cost Buffalo against better opponents.

18. Good thing the Packers are laying the groundwork to replace QB Aaron Rodgers, who threw for 364 yards and four scores as Green Bay (522 total yards) outgunned the Vikings.

18a. The Pack’s defense didn’t look particularly inspiring while surrendering 34 points to Minnesota. But don’t blame underrated CB Jaire Alexander, the first Green Bay player to record a safety in 19 years. Alexander also became the ninth player in NFL history to register a safety, sack and interception in the same game.

19. The Raiders and Panthers exchanged the lead seven times. Pretty exciting game, especially relative to the lack of buzz it received.

20. Don’t think the Ravens, who won an NFL-high 14 regular-season games in 2019 and have won 13 in a row (playoffs notwithstanding), can’t be better in 2020? Baltimore’s 38-6 thumping of the Browns was plenty impressive, but all the more so when you consider the contributions of rookies Patrick Queen (team-high eight tackles, sack) and J.K. Dobbins (2 rush TDs).

21. Cleveland hasn’t won on opening day since 2004, a 16-season stretch of Week 1 futility that is the longest in league history.

23. Eagles QB Carson Wentz has a TD pass in 20 consecutive regular-season games, the longest active streak in the league.

24. It’s a bummer that the novel coronavirus pandemic has generally precluded fans from attending games. But the more discernible audio coming out of the stadiums Sunday – from listening to players celebrate to the clang of a ball hitting off an upright – was pretty refreshing.

25. Speaking of things going viral, the bizarre graphics that once seem limited to “Monday Night Football” now seem to pervade nearly every broadcast. Only CBS seems to still be largely inoculated.

26. Very cool – also not surprising – to see the Ravens honor superfan Mo Gaba, who died at the age of 14 in July, with cutouts of him throughout M&T Bank Stadium while highlighting the “MO” within “Baltimore” in gold in the end zone.

27a. Hopkins had a career-high 14 receptions (for 151 yards) in his Cardinals debut, a surprising upset of the 49ers on the road.

27b. Houston’s wide receivers had 13 catches (for 163 yards) in their loss at Kansas City.

28. Your early offensive rookie of the year front runner, as predicated by one Nate Davis: Clyde Edwards-Helaire, who debuted Thursday by running for 138 yards and a TD. The Chiefs’ 166 rushing yards in their 34-20 defeat of the Texans were more than they gained in any game last season.

Patrick Mahomes improved to 8-0 in the month of September and the Chiefs showed a different offensive game plan. pic.twitter.com/voL4LeGQ1g

29. Chiefs QB Patrick Mahomes has never lost a Week 1 start. In fact, in the month of September, he has an 8-0 record, 26 TD passes, zero interceptions and a 128.7 passer rating.

30. Conversely, Houston’s Deshaun Watson has never tasted victory in Week 1 … and the Texans last did so in 2016.

31. The Colts can be forgiven a loss in Jacksonville given the Jaguars may have enjoyed the most, uh, hostile environment in the league – 14,100 paid attendance – Sunday.

31a. Still, first impression of Philip Rivers’ (2 INTs) debut with the Colts? Indianapolis may have gotten the 2019 version of Philly River instead of the 2018 edition. Send squirrel oil pronto.

32. Miss you, @CaptAndrewLuck. Some leaders (and tweeters) are simply indispensable.

Dearest children —
Bundle your knapsacks, as I have accepted command of troops in a territory to the East. Though rusted, the Colt Army shows faith in my sidearm. We must journey to our new homestead, bearing great caution for the lager disease that plagues the masses.
— Father