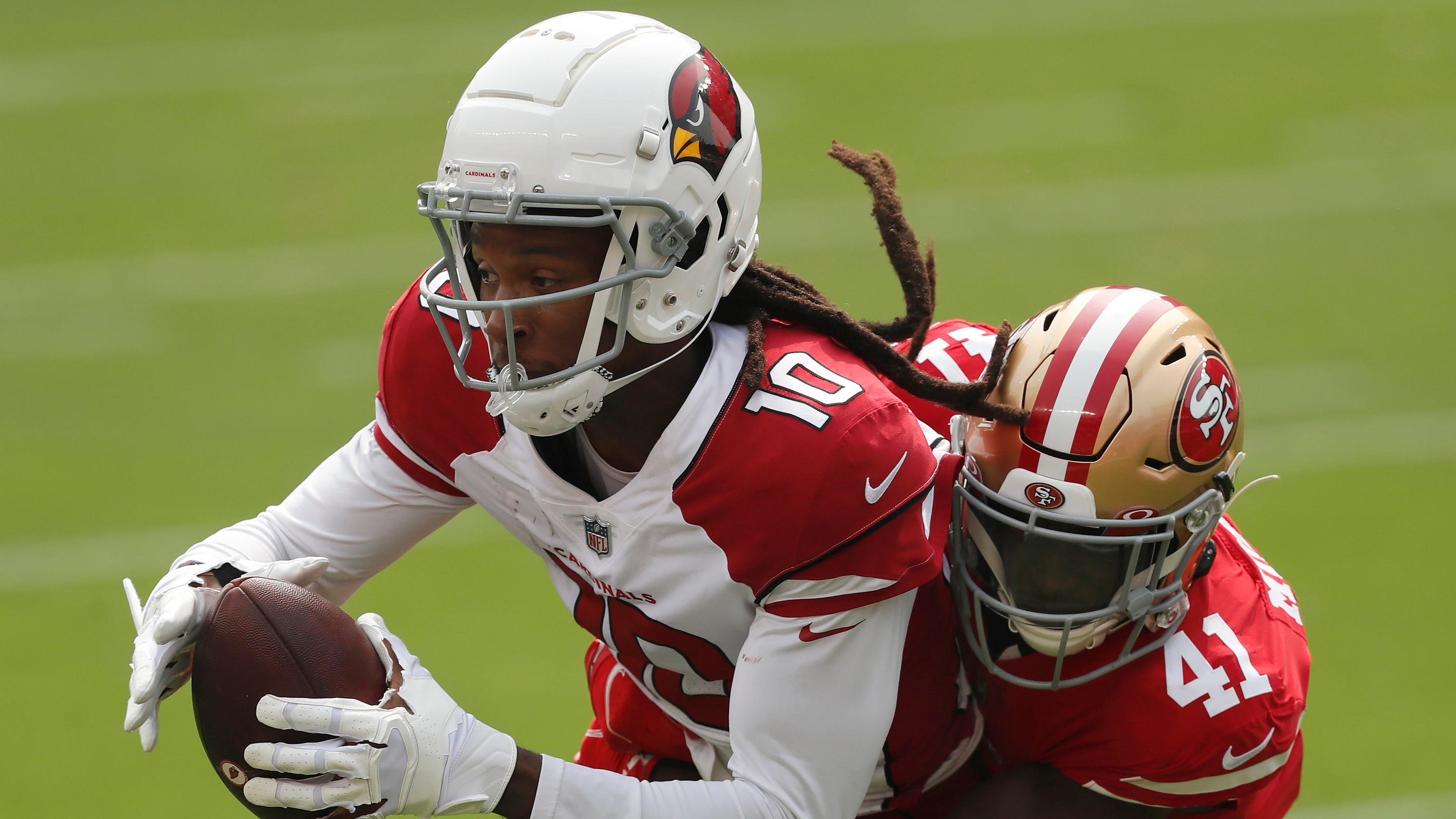 Recap: Kyler Murray passed for one touchdown and ran for another and the Cardinals held on to beat the defending NFC champion 49ers 24-20 on Sunday at Levi’s Stadium in Santa Clara, Calif. It was Arizona’s first season-opening win on the road since 2010.

It was a 33-yard pass from Murray to wide receiver DeAndre Hopkins that set up the game-winning score, a 1-yard touchdown run by Kenyan Drake. Hopkins led all receivers with 14 catches and 151 receiving yards in his Cardinals’ debut following his offseason trade form the Texans.

The 49ers countered with a touchdown of their own less than two minutes later to retake the lead 20-17, getting a 41-yard catch and run from Kyle Juszczyk to set up a 5-yard scoring pass from Jimmy Garoppolo to running back Jerick McKinnon.

In a bit of a surprise, the Cardinals started rookie Isaiah Simmons at outside linebacker to start the game and they also used him at inside linebacker. He was a factor in both of the 49ers’ first scores, first by getting flagged for a horse collar-tackle on George Kittle that led to a field goal, then by getting caught out of position while defending running back Raheem Mostert, who ran a short crossing rout that turned into a 75-yard catch and run for a touchdown.

Trailing 10-0, the Cardinals took advantage of a huge play on special teams to turn the tide. Ezekiel Elliott managed to block a Mitch Wishnowsky punt with an outstretched left hand and it was recovered by Dennis Gardeck. Moments later, Murray hit running back Chase Edmonds with a 10-yard touchdown pass.

Following a Robby Gould 24-yard field goal, the Cardinals countered with a career-longer 56-yard field goal from Zane Gonzalez to close out the first half. Gonzalez, however, missed two other attempts from 52 and 49 yards, pushing both of them wide right.

Turning point: Cornerback Patrick Peterson made the saving play of the game, leaping to deflect a pass away from 49ers receiver Kendrick Bourne in the end zone with 1:14 left to play. Garoppolo made the perfect throw on the play, but Peterson snuffed things out. Moments later, Byron Murphy Jr., knocked another pass away from a receiver to end it.

Star player: Murray was intercepted once on a deflected pass, but he kept his composure throughout drives that were stalled by penalties and he was smart with the football, especially when deciding to scramble out of the pocket.

Whether it was slinging passes to Hopkins or using his legs to keep moving the chains, Murray was everywhere when the Cardinals needed someone to make a play.

Up Next: The Cardinals play the first of back-to-back home games at State Farm Stadium with a visit by the Washington Football Club on Sunday. Kickoff is at 1:05 p.m. No fans will be allowed at the stadium.