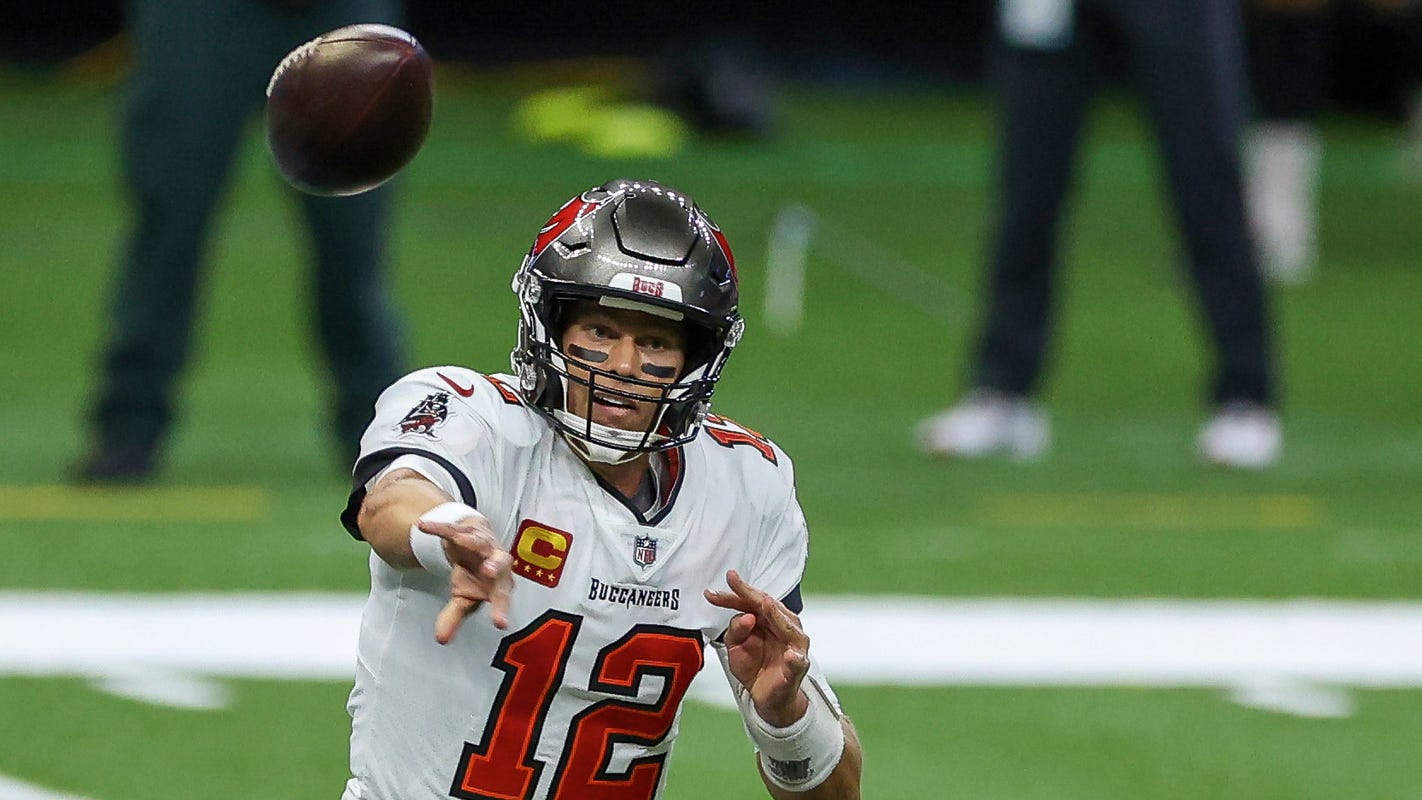 NEW ORLEANS – Not so fast, Tom Brady. This Tampa Bay Buccaneers stuff will take some time.

Brady’s much-anticipated debut in a Bucs uniform came with a reality check at an empty Superdome that gives pause to the predictions of some people that a Super Bowl is some sort of destiny.

Sure, it’s still possible that the Bucs can become the first team to host a Super Bowl in their home stadium. It’s only Week 1. Not time to overreact.

Yet the first impression clearly did not live up to the hype.

Brady threw two interceptions – one returned 36 yards for a score by Janoris Jenkins, another by Marcus Williams setting up an Alvin Kamara touchdown – to help dig the hole that the Bucs couldn’t climb out of during a 34-23 loss to the New Orleans Saints.

The NFL’s oldest active player, Brady, 43, looked the part at times, while struggling to find a consistent rhythm. In completing 23 of 36 passes for 239 yards, he produced a ho-hum passer rating (78.4), was sacked three times and had as many picks as TD passes (2).

Never mind the sentimental coincidence that Brady’s new chapter was launched at the site of the first of his six Super Bowl triumphs with the New England Patriots.

It will take time for all of the Bucs’ new pieces, including Rob Gronkowski and Leonard Fournette, to jell. Yet it’s also apparent that after bullying so many opponents in dominating the AFC East with the Patriots (18 division titles in 20 years), Brady’s new reality is that his new team is hardly the bully of the NFC South. That tag, at the moment, belongs to the Saints.

Brady was reminded of such in his official welcome to the NFC South.

Three other things we learned from Saints-Bucs:

1. All is normal between Mike Evans and Marshon Lattimore — Evans’ status seemed iffy in the days before the opener after the star receiver dealt with a hamstring injury. Yet Evans played and there was nothing iffy about his continuing feud with the accomplished Saints cornerback. Remember, it was Lattimore whom Evans struck from the blindside in a 2017 game here that drew the receiver a one-game suspension from the NFL. As usual, Lattimore was physical in shadowing Evans extensively in man coverage. And of course, some stuff went beyond the whistle. Late in the second quarter, Lattimore was flagged with a 15-yard personal foul for pushing Evans in the back – in retaliation for a shove to Lattimore’s face that officials apparently missed, which might have been retaliation for something else. Anyway, it’s clear that the pandemic hasn’t changed the dynamics of one of the NFL’s most intense matchups.

2. Drew Brees’ latest record doesn’t deserve to make the highlight film — The Saints quarterback became the NFL’s all-time leader for passing attempts, surpassing Brett Favre’s mark with the 10,170th throw of his career. But the second-quarter throw was hardly representative of greatness as the play sailed way beyond intended target Josh Hill and never came close to being completed. The play was probably doomed by mixed signals as Hill ran a shallow route, while Brees threw to a deeper corner spot. In other words, one zigged and the other zagged.

3. Versatility was the ticket for the Saints’ offense — Michael Thomas caught just three passes for 17 yards. Alvin Kamara rushed for only 16 yards, though he had 51 yards on five receptions. Taysom Hill was stuffed on what could have been a pivotal third-down sweep. Yet Sean Payton’s team still won with a big cushion. It helped to get the two interceptions off Brady that generated 14 points, and the recovery of a Thomas Morstead pooch kickoff led to a field goal. But on a day when the big playmakers didn’t produce huge numbers, Brees found ample support from with tight end Jared Cook emerging as the top receiver (5 catches, 80 yards) and Latavius Murray leading the rushing attack (15 carries, 48 yards). And newcomer Emmanuel Sanders caught a TD, too. Good for the Saints. The more ways, the merrier.