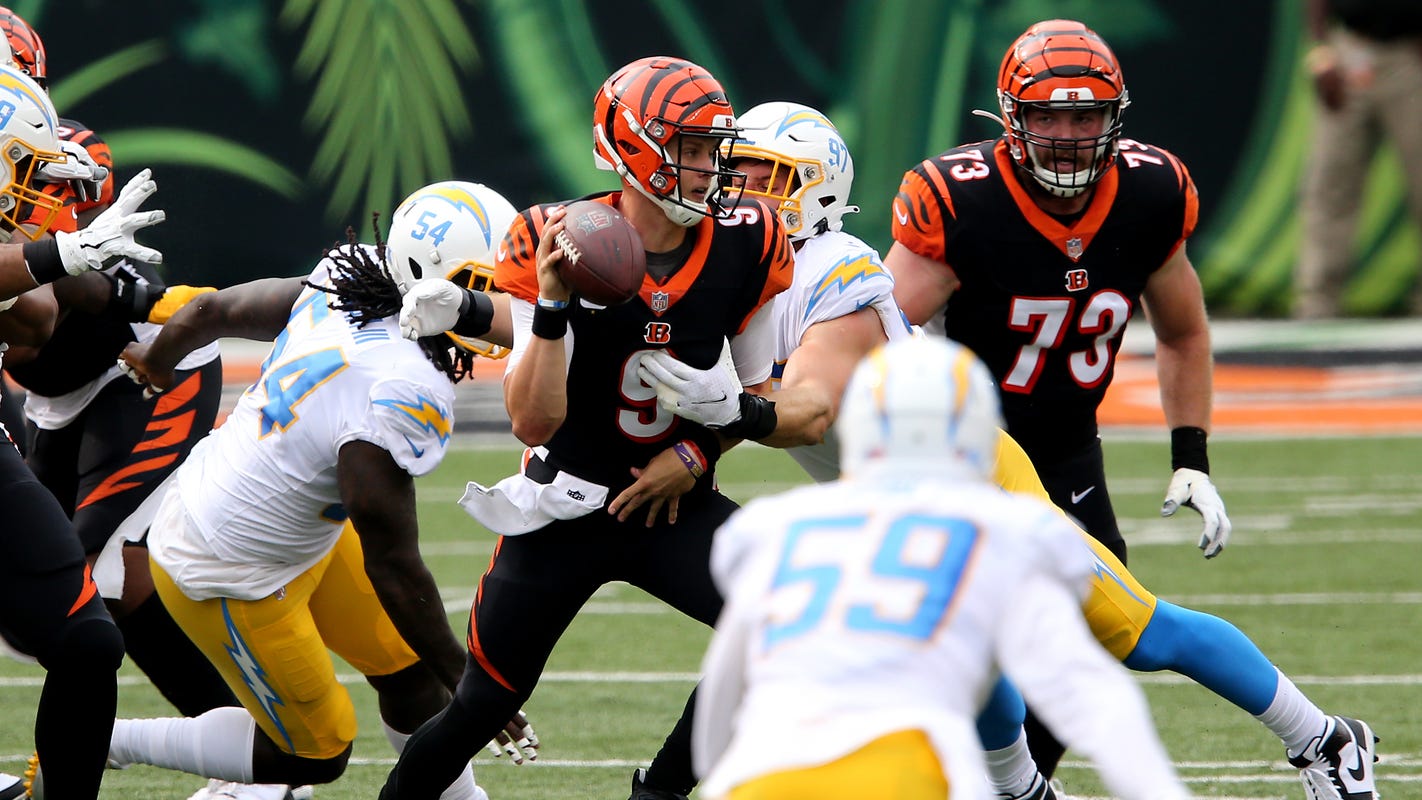 With five minutes left in the fourth quarter, Joe Burrow made the first mistake of his NFL career. Burrow led the Cincinnati Bengals into Los Angeles Chargers territory, and the Bengals were in position to make a game-tying field goal.

That play could have marked the end of Burrow’s NFL debut, but the 23-year-old says he’s never been afraid of the moment since he started playing football.

But Randy Bullock missed the 31-yard kick, and the Los Angeles Chargers beat the Bengals 16-13 to spoil Burrow’s debut. 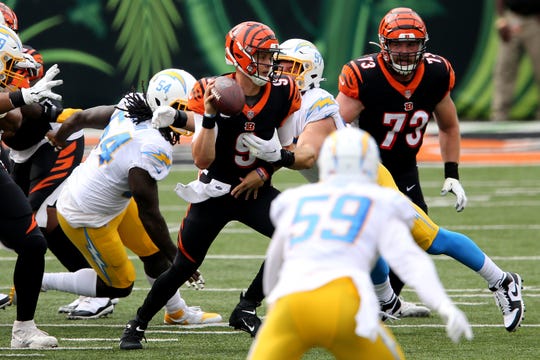 Cincinnati Bengals quarterback Joe Burrow (9) gets rid of the ball as pressure is applied in the first quarter during a Week 1 NFL football game against the Los Angeles Chargers, Sunday, Sept. 13, 2020, at Paul Brown Stadium in Cincinnati.  (Photo: Kareem Elgazzar)

It would have been one of the most memorable endings to a quarterback debut in Bengals history, but instead the Bengals start the season 0-1.

Throughout the game, Burrow responded after making some early mistakes and withstanding a great Chargers pass rush.

At the start of the game, Burrow completed his first NFL pass, a swing pass to running back Joe Mixon out of the backfield. His next throw was intended for wide receiver Mike Thomas, but it was well off target and the Bengals went three-and-out on their first possession.

On the next series, Burrow had the 14-yard sack, and on the next play he fumbled the ball on an attempted lateral to Mixon.

Even though Burrow didn’t have much time to throw on the Bengals third series either, he put the Bengals on the scoreboard first.

Near the end of the first quarter, Burrow hit A.J. Green for a 13-yard slant on third down. Two plays later, Burrow called his own number and ran for a 23-yard touchdown. He went untouched on his way to the end zone and gave Cincinnati an early lead.

The Bengals went into halftime with a 7-6 lead, but Burrow only had 51 passing yards with nine completions before the break.

Cincinnati’s defense kept the team in the game. Defensive tackle Geno Atkins, one of the Bengals’ best defensive players, was out Sunday with a shoulder injury. But Cincinnati’s new additions limited big plays from Chargers running back Austin Ekeler and tight end Hunter Henry.

The Bengals’ inability to score a touchdown gave Los Angeles’ inconsistent offense an opportunity in the fourth quarter. After Mixon fumbled in Bengals territory, the Chargers were in field goal range and took a 16-13 lead with 8:56 left.

Burrow threw his first NFL interception on the Bengals next drive, which was Cincinnati’s best chance to tie the score.

The Bengals got the ball back with three minutes left, but Bullock missed the potential game-tying kick.