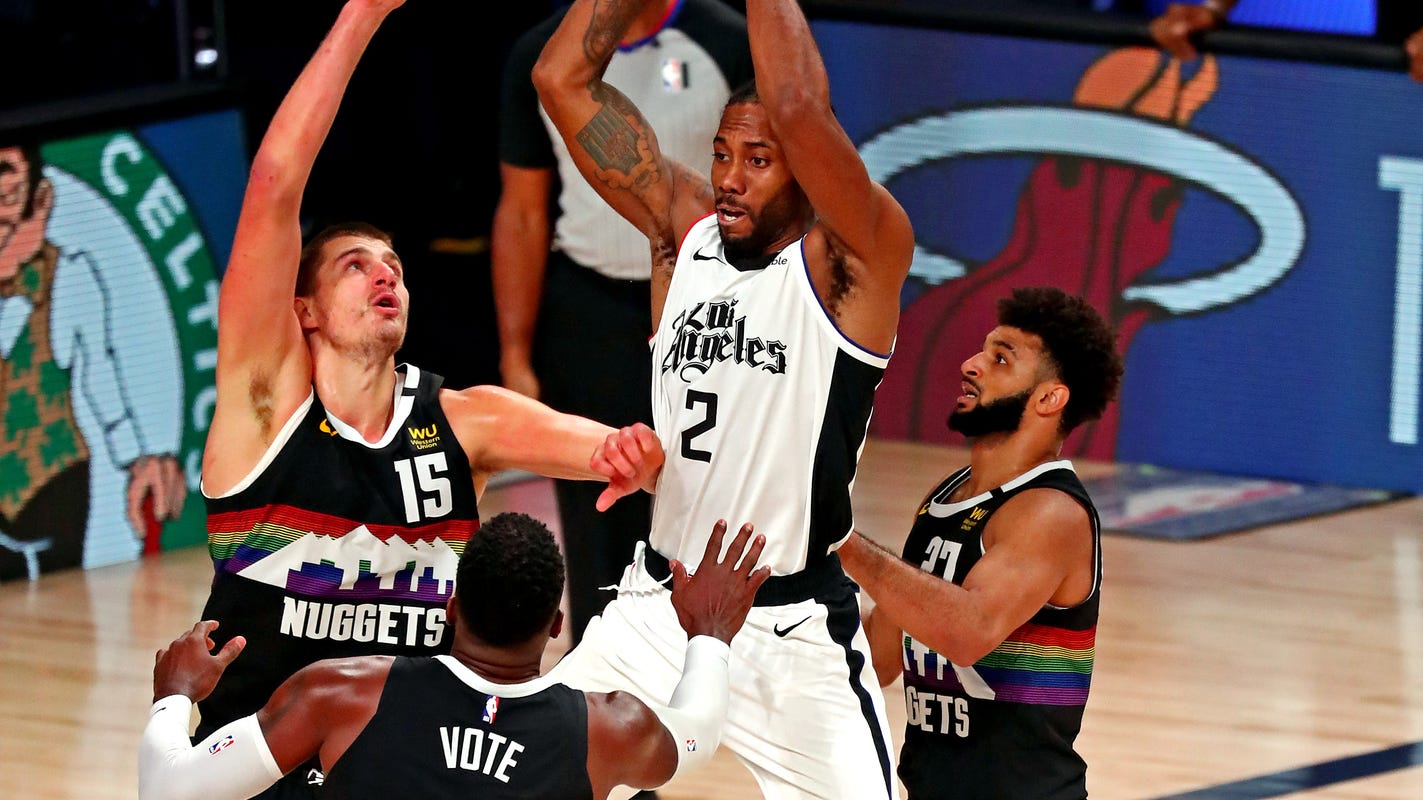 Questions mount after another blown lead vs. Nuggets

“Just to try to get us to keep playing the way we played to get these leads,” Rivers said. “It was beautiful basketball, and then we stopped playing.”

Are the Clippers championship material? Or are they shrinking under pressure? Are they just laboring through complacency? Or are the Nuggets’ talent and resiliency too much to overcome?

“This group is staying together. We’re still in the driver’s seat,” said Clippers forward Paul George after logging 33 points, six rebounds, five steals, three assists and three turnovers. “We’re not in panic mode. We got a Game 7.

“I like our odds with our group. We put ourselves in this position, and it’s on us to get ourselves out of it. It all comes down to what we do on Game 7.”

The problem with the Clippers? It remains hard to predict what they will do in any game against the Nuggets

That has become a costly approach against Denver, which are 5-0 this postseason in elimination games and overcame a 3-1 first-round series deficit against the Utah Jazz. The Nuggets have Nikolia Jokic’s inside dominance (34 points, 14 rebounds, seven assists), Jamal Murray’s point-guard skills (21 points, five assists) and a strong supporting cast in Gary Harris (16), Michael Porter Jr (13) and Monte Morris (10).

“Just have to leave it all out on the floor and make sure we pay attention to detail, executing and communicating on the defensive end,” Clippers forward Kawhi Leonard said. “That’s all we can do. Go out there and play hard and just make sure we know the game plan.”

If only it were that simple.

After Murray labored through an injury two minutes into the third quarter, Rivers observed that “the complexion of the game completely changed.”

In the latest performance, the Nuggets chipped away at a 19-point third quarter deficit two days after overcoming a 16-point deficit.  Denver outscored the Clippers, 30-16, in the third quarter while holding them to a 4-of-20 clip (20%).

Though Leonard finished with 25 points, eight rebounds, five assists and two steals, he went scoreless in the third quarter and attempted only three shots. The Clippers’ bench had a combined four points on 2-of-7 shooting. Are the Clippers just choking?

“We just went cold,” Leonard said. “We went cold in that third quarter. That’s it.”

RIVERS: Condemns shooting of both Black people and police officers

OPINION: LeBron senses the moment and pounces to close out Rockets

Still, the Clippers have treated this season with occasional complacency and lapses as if they were nursing a championship hangover. The only problem: only one of them has won an NBA title. That honor only belongs to Leonard, who won his second NBA championship last season with Toronto.

Some of their inconsistency during the season seemed understandable. They had overlapping injuries with Leonard, George and role players that made it impossible to have consistent on-court time together both in games and practice. In their first-round series against Dallas, the Clippers saw Luka Doncic further rise as a star while George struggled with mental health issues and Patrick Beverley remained sidelined with a left calf injury, while Lou Williams and Montrezl Harrell shed off rust from recent quarantines.

“It’s frustrating. But when you decide to be a coach, it’s not going to be roses every day,” Rivers said. “We clearly have the right formula as far as how we’re playing and then we keep losing it.”

And yet despite that frustration, Rivers expressed optimism the team’s mood and play will “be good by Game 7.”

After losing with the San Antonio Spurs in the 2013 NBA Finals against the Miami Heat with crucial Game 6 and Game 7 losses, Leonard rebounded the following year with a Finals MVP performance. Five years later, Leonard helped the Raptors overcome a 2-0 deficit against the Milwaukee Bucks in the Eastern Conference Finals. He also made the game winner against the Philadelphia 76ers in Game 7 of the Eastern Conference semifinals.

The Clippers don’t have as much of that championship equity, but they have the talent and depth to grab the hardware. That is if the Nuggets do not get in the way.

“We have the utmost respect for them as opponents,” George said of the Nuggets. But I like our chances. I like our odds. I like what we have. Again, it’s on us to finish this out.”

And if not? Well, then the Clippers will painfully experience what happened with the Nuggets twice already in the past two games.