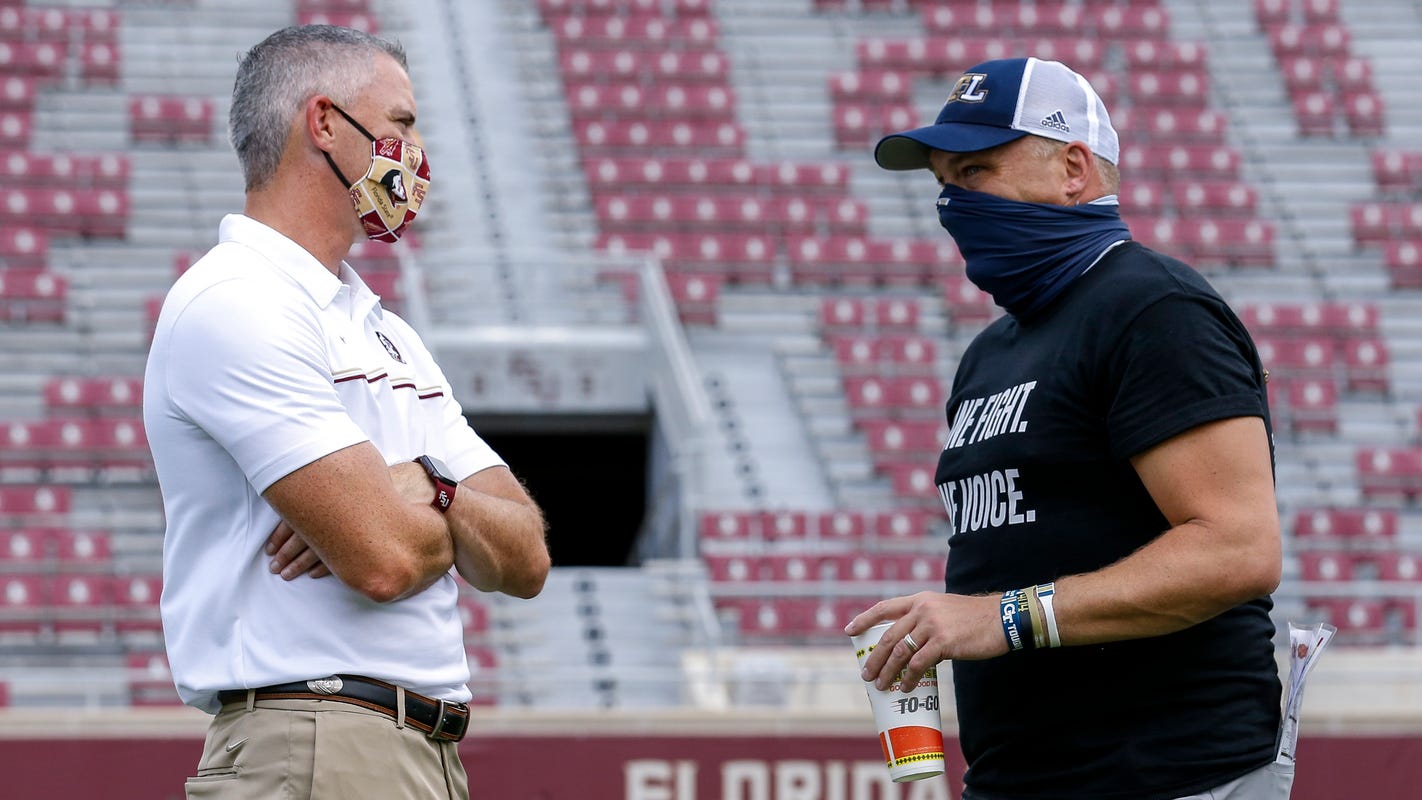 As the 2020 college football seasons cranks up in unusual intervals, with starts and stops and question marks abounding, the Misery Index can safely say that our time has come.

Let’s face it, 2020 has not been kind to us for reasons we don’t really need to go into. We all understand the challenges we’ve had to face over the last six months. But with college football coming back, regardless of its quality or being played in mostly empty stadiums, Americans can at least wrap themselves in the comfortable blanket of hyperventilation and self-loathing every weekend when their favorite teams lose. Being able to complain about your coach’s terrible play call or a special teams meltdown or how the defense choked against an inferior opponent has never felt better.

With that in mind, these unprecedented times call for a Misery Index honoring a program that has found itself here on many occasions over the past few years. Yes, we’re talking about Florida State.

What better place to start?

Nobody really thought that Mike Norvell was going to come in overnight from Memphis and fix all the problems that had built up over the years, starting with the laissez-faire end to the Jimbo Fisher era and spiraling through the misbegotten 21-game tenure of Willie Taggart. Florida State’s overall talent level may be decent compared with many programs, but the pieces never fit and the offensive line was never recruited or developed to a level that would allow much offensive success.

Still, Norvell ran one of the nation’s most successful offensive units for four consecutive years at Memphis and fashioned a reputation as a truly elite playcaller. Surely the Seminoles would look better right away on that side of the ball, right?

The Seminoles managed just 307 total yards in a 16-13 loss to Georgia Tech and turned it over three times against a team that was picked last in the ACC. After scoring points on their first two drives to take a 10-0 lead, the Florida State offense went punt, interception, punt, turnover on downs, punt, field goal, fumble, fumble, turnover on downs.

Many of Florida State’s problems in the opener were predictable because it’s the same problems they’ve had for years now. Still, Florida State fired Taggart and hired Norvell to fix them and a fan base that has been in a collective bad mood since 2014 now has even less hope that things are going to turn around anytime soon. That’s why Florida State  is No. 1 in this week’s Misery Index, a weekly measurement of knee-jerk reactions based on what each fan base just watched.

Kansas: Where do you even begin with the Jayhawks, who have now lost to Coastal Carolina in back-to-back seasons and got absolutely thudded this time around, 38-23. Even for with modest dreams of respectability when it hired Les Miles a couple years ago, the Jayhawks feel as if they’re still years away from anything resembling adequate Big 12 football. Heck, they couldn’t even get their quarterback’s name spelled right on the back of his uniform.

But whether it was Thomas MacVittie (the correct spelling) or MacVitte (the way it was on his uniform), it might as well have been any one of us playing quarterback for Kansas. It wouldn’t have mattered. The Jayhawks turned it over on three of their first five possessions and trailed 28-3 at halftime in truly the most miserable performance of the weekend.

Iowa State: Continuing with the theme of the Big 12’s awful Saturday, the Cyclones allowed a kickoff return for a touchdown, a punt return for a touchdown and a 78-yard touchdown pass. Those three plays were the difference between a solid season-opening win and an embarrassing 31-14 loss to Louisiana in which the Cylones’ defense only allowed 272 yards. And it absolutely stinks for everyone else in the Big 12 because Iowa State is a good enough team to upset an Oklahoma or Texas or Oklahoma State at some point later and hurt their chances for the College Football Playoff because that’s pretty much what they do every year under Matt Campbell, who starts then popping up in rumors for bigger jobs in college and the NFL. But until Iowa State fixes its slow start problem — they’re just 5-8 in August and September since 2017 — those celebrations every December when Iowa State inks Campbell to a new contract extension will look increasingly overwrought.

Kansas State: When you think about the silver helmets with the purple silhouette of a wildcat on the side, you think about a program that knows how to run the ball. It’s smart football. It’s physical quarterbacks who could get tough yards like Michael Bishop and Collin Klein. It’s winning special teams and finding hidden advantages. You know what it’s not? It’s not rushing for a measly 2.3 yards per carry — 91 overall — against a Sun Belt team. It’s not going 1-for-11 on third down. It’s not missing two field goals and allowing Arkansas State to march down the field for a winning touchdown, 35-31, with just 38 seconds left in Manhattan. This may turn out to be a funky result in retrospect — both Kansas State and Arkansas State were missing big chunks of their team — but it’s undoubtedly a less-than-ideal start to Chris Klieman’s second season following Snyder.

Texas Tech: And completing the Big 12’s deflating weekend was a team that actually won its game but won ugly. Even Texas Tech fans who were starved all offseason to watch football had to ask themselves if enduring a scare against Houston Baptist was really worth it. Though Texas Tech led the entire way and ultimately survived 35-33, the fact that the Red Raiders never got full control of the game has to raise big alarm bells as the conference schedule gets underway. You’re talking about a Houston Baptist program that went 1-10 in 2017 and 2018, improved a bit to 5-7 in 2019 and opened this year with a 57-31 loss to North Texas. Comparative scores can be misleading, but it’s really all we’ve got right now. If North Texas could put Houston Baptist away comfortably while the Red Raiders were hanging on for dear life and allowing 600 offensive yards in the process, it’s hard to feel great about that performance.

Texas State: Once you’ve done the hard work to come back from a 41-28 deficit in fewer than four minutes, as the Bobcats did against Texas-San Antonio on Saturday, you can’t then lose because you missed a game-winning extra point. But that’s exactly what happened, as kicker Alan Orona pushed it wide right after Texas State tied the game with a 91-yard kick return. Instead, Texas-San Antonio won it in the second overtime, delivering the first major gut-punch loss of the season.

South Alabama: The Jaguars were all hyped up to debut their new 25,000-seat on-campus football stadium, even if social distancing regulations only allowed 6,000 fans to actually be there. And about halfway through the third quarter, it appeared it was going to be a successful opening for the home team, which was leading Tulane 24-6. Instead, South Alabama went three-and-out four times in the next five possessions and allowed Tulane to storm back for a 27-24 win.

“National perception: Are we a football or basketball school currently?” – warchant.com (Florida State)

“Is it too late to cancel the season?” – phog.net (Kansas)

“Does CMC (Coach Matt Campbell) have any gas left in the tank?” – Cyclonefanatic.com

“Will we win more than 2 games this year?” – K-Stateonline.com

“are we watching the worst tech team in its nearly 100 year history?” – RedRaiderSports.com