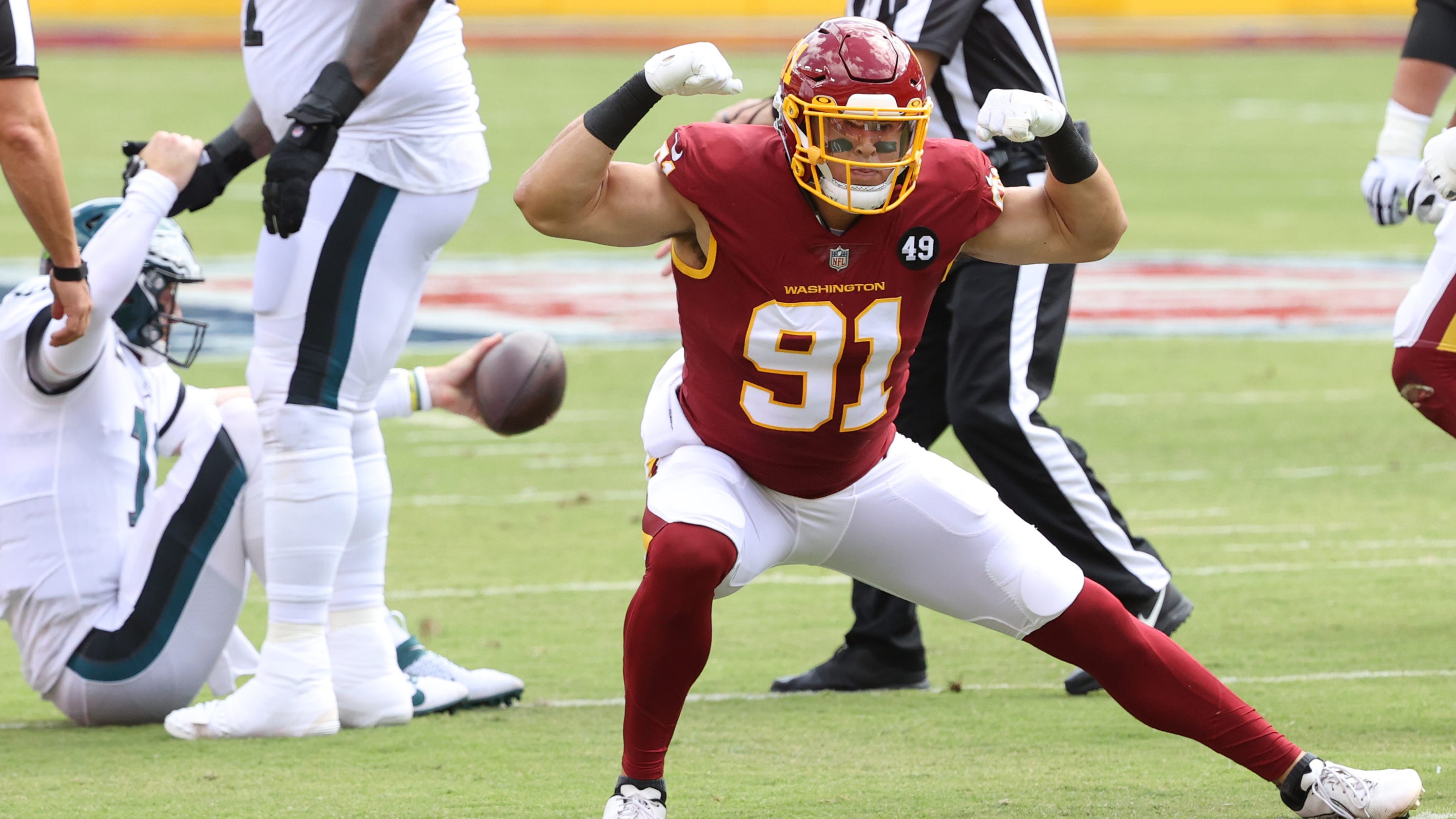 LANDOVER, Md. — A year after blowing a double-digit lead to lose to the Philadelphia Eagles in the season opener, the Washington Football team pulled off a 27-17 comeback victory over the Eagles at FedEx Field.

Here’s what we learned:

1. Youth is a real issue for Washington — Rivera and his young, rebuilding team recovered from a slow and sloppy start to kick off the season with a much-needed victory following an offseason of change and off-field issues. Early on, Washington’s defense struggled to get off the field on third downs and committed silly penalties (offsides on third downs, late hits out of bounds), and its offense went 2-for-8 on first-half third downs. Second-year quarterback Dwayne Haskins struggled with accuracy (completing just one of six pass attempts in the first quarter, and six of 10 throws in the second quarter), and the reconstructed left side of his line had trouble protecting.

But in the second half, an aggressive defense and patient approach on offense led to a turnaround for Washington. Quick-hitter pass plays helped improve the offensive rhythm. In the second half, Haskins completed 10 of 15 passes for 102 yards and a touchdown. Haskins certainly looked like a young quarterback very much learning on the fly. And Washington’s offense lacks a group of game-changing play-makers. Coaches like the young receivers and backs they have, but it will take time for these players to develop into consistent threats. But the defense greatly helped ease the pressure on the offense in the second half.

2. Del Rio’s defense is loaded with potential — Washington has heavily invested in its defense in recent years, using first-round picks on defensive linemen in each of the last four drafts. Those young players, including rookie defensive end Chase Young, certainly made their presence felt, sacking Carson Wentz eight times while helping change the complexion of the game. They need to become more disciplined as offsides penalties on three different third downs gave the Eagles life. But once defensive coordinator Jack Del Rio can help them find that healthy balance, they will be problematic for teams.

Wentz appeared rattled from the mid-second quarter on. Young recorded a strip-sack in the second quarte. While under pressure, Wentz threw interceptions in the second and third quarters. He threw another late in the third quarter, but a neutral zone infraction on defensive tackle Matt Ioannidis negated that turnover. Pressure from the front seven resulted in a big turnover on downs on fourth-and-4 from the Washington 45 that Washington later converted into a game-tying field goal with 14:18 left in the game. A seventh sack (Ryan Kerrigan’s second of the game and franchise-record 92nd of his career) came with 14:15 left in the game deep in Philly territory. Strong defensive play will be vital to Washington’s success, particularly early on as Haskins and the offense find their footing.

3. O-line depth kills Eagles— Philadelphia entered this game with a battered offensive line. They had lost Pro Bowl right guard Brandon Brooks and left tackle Andre Dillard to injuries, and Pro Bowl right tackle Lane Johnson also was inactive with injury. The losses didn’t seem to be an issue early on as Wentz directed a crisp early scoring drive that sparked a 17-0 scoring run. However, as the game went on, Washington’s pass rush began to overwhelm the Eagles, and Wentz looked tentative and frequently found himself on his back.

Wentz and tight end Dallas Goedert displayed a strong early connection, but in the second half, the quarterback rarely had time to go to his tight end. In a year in which continuity figures to be crucial thanks to an altered offseason schedule, Philadelphia should rank among quads with an advantage, at least early on. However, health is an aspect that potentially could derail their chances of repeating as NFC East champs.