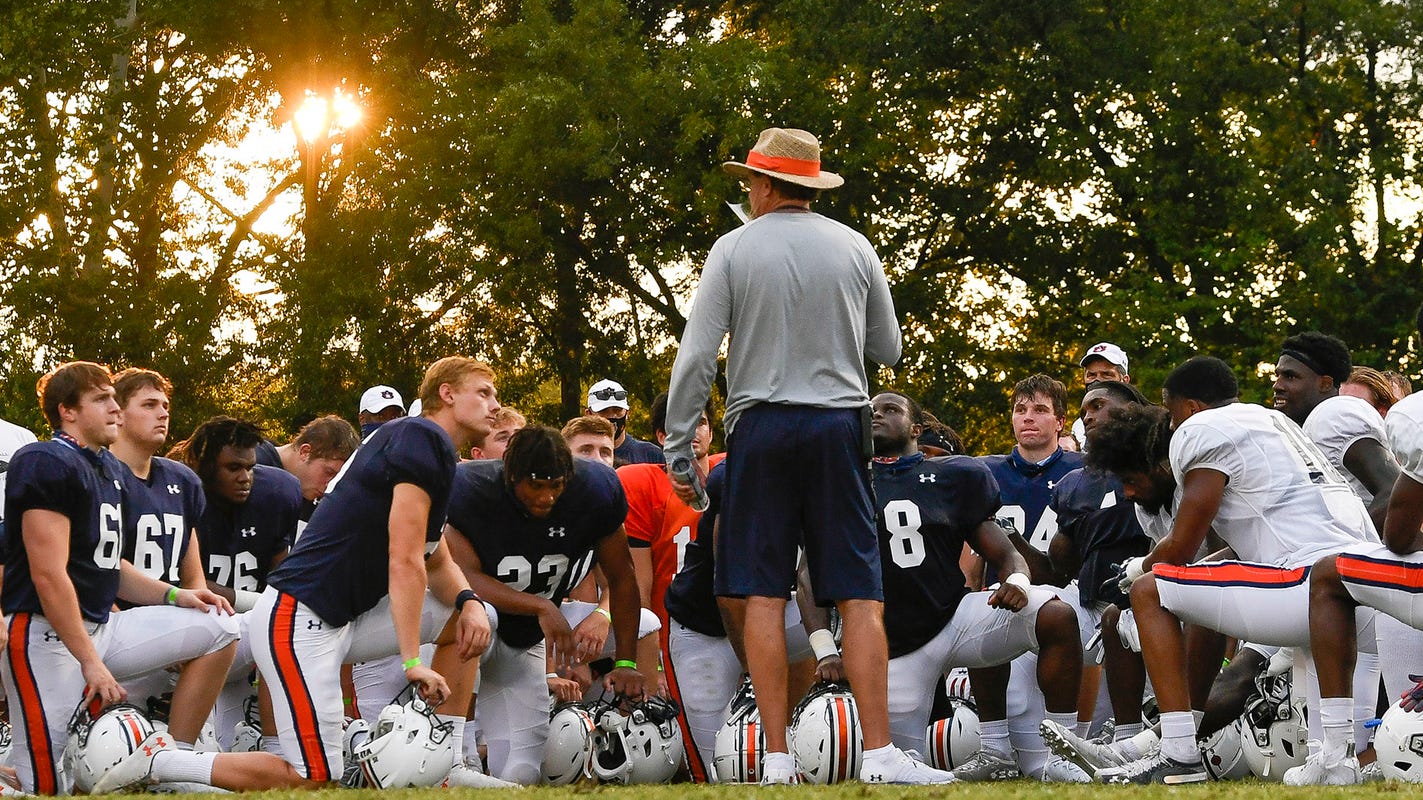 AUBURN, Ala. — The effects COVID-19 could have on Auburn’s 2020 football season are becoming more and more apparent as kickoff gets closer.

Coach Gus Malzahn said Saturday the program reported two new positive COVID-19 cases this week, which led to 10 players being placed into quarantined. Five of them are starters.

All of them should be back in time to play Sept. 26 against Kentucky. The biggest issue, though, is that the game is only two weeks away. Auburn will spend that time honing in on its game plan, and while those players can continue to attend Zoom meetings from isolation, they obviously cannot get on the field for practice reps — the SEC requires 10-day quarantines for anyone who tests positive and 14 days for any contact traces.

“You’re sitting here two weeks from kick and you’ve got some of your guys that aren’t practicing,” Malzahn said Saturday after the team’s third scrimmage of the preseason. “Obviously, it’s concerning.”

It’s also a reminder of how quickly things can change. We’ve seen it over and over again through just four weeks of Auburn’s preseason. The team didn’t report a single positive test the Sunday before its first practice on Aug. 17. The next week, it had to miss three scheduled practices after nine positive tests led to 16 players being placed in quarantine. Then, again, it returned zero positives during two rounds of testing last week.

And it’s not the positives that are the most concerning, although the health and safety of Auburn’s players remains paramount to the program’s coaches and medical staff. The contact traces represent the biggest threat.

The Tigers have had only 11 players test positive since the start of preseason practice, which is just 9% of its 122-man roster. But those 11 positive have led to 26 total players being isolated. Malzahn declined to go into specifics, but he did say two positions were hit particularly hard two weeks ago, which is what ultimately led to the canceled practices.

FLORIDA STATE FREE FALL: What we learned from Week 2 of the college football season

Add in four players who missed the first week of practice because they were in quarantine as a result of summer tests, and almost 25% of the roster has missed practice time as a result of the pandemic, even though not all of them have contracted the virus. It’s the cost of preventing a full-fledged breakout in a team.

The chances of it happening again may increase starting this upcoming week, too, when Auburn goes from two rounds of testing (Sunday and Wednesday) to three, per the SEC’s guidelines.

And because of the medical protocols Auburn has in place (which include a seven-day reacclimation period for anyone infected with the virus), any positive test or contact trace from here on out would likely force that player to miss the Sept. 26 opener against Kentucky, which is less than 14 days.

“I think for the most part our guys have done that, but it’s being six feet away,” Malzahn said. “You’ve got to be six feet away. Our coaches here in the building, that’s just the way we’ve operated. It becomes a way of life. Like I said, I think overall our guys have done a really good job. But when you’re talking about. … I think close contacts when you do have a positive, that’s the issue. That’s the issue with everybody.”

The positive, if there is one to be found, is that having those players sidelined — specifically the starters — opens up more practice reps for those behind them on the depth chart. And not just with the third-team offense and defense, where Malzahn said things have a tendency to get “a little bit ugly,” but with the first and second teams.

That could lead to meaningful contributions from true freshmen across the roster, especially considering that this season will not count against a player’s eligibility (meaning there’s no need to worry about redshirts).

“When it really is sound around them,” Malzahn said, “they have a chance to really show what they can do to be successful. That’s the positive. That’s the way we’re looking at it. I told you a couple weeks ago, I think the teams that can adjust and not get distracted or discouraged and all that and just say ‘Next man up,’ that’s the teams I think are going to have an advantage.”

That same is true in the coaching ranks. Malzahn said earlier this preseason that Auburn would make efforts to have backup coaches in place in the event that any member of the staff tests positive. Asked whether he had a backup, though, Malzahn said his focus in that situation would be on finding a way to continue to do his job from isolation somewhere inside the stadium or via Zoom.

“I know my buddy (Liberty coach) Hugh Freeze coached last year laying down in a hospital bed,” he said. “That’s the way I’m looking at it.”