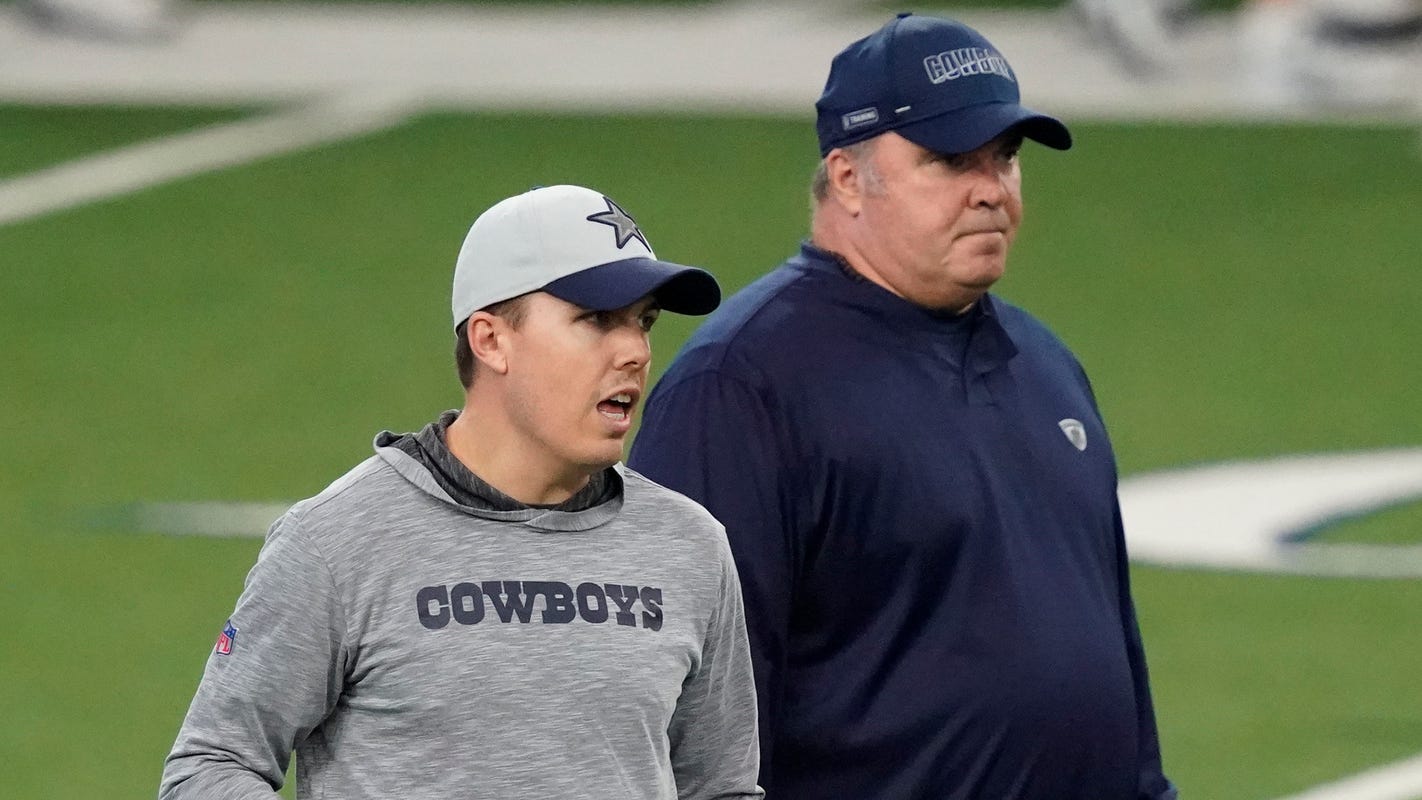 Amari Cooper was sidelined in practice? There’s data driving that decision. Best way to streamline peaks and valleys through the season? He’ll illustrate trends to his players. The first-year Cowboys coach will tell you that opponents usually flaunt at least 30% of “unscouted” looks in season openers, and he’ll quantify for you how often performance in 2-minute scenarios has determined the outcome of an NFL game in recent seasons.

But ask McCarthy how the division of labor panned out when he and coordinator Kellen Moore devised Dallas’ 2020 offense, and McCarthy will pump the breaks.

“We apply mathematics to pretty much everything we do,” McCarthy said. “But that’s not one of them.”

McCarthy says the offense systematically reflects what he operated for nearly 13 seasons in Green Bay. But schematically, McCarthy predicated the offense in concepts and language that powered the Cowboys’ league-high 431.5 yards per game in 2019. In simpler terms: Think McCarthy’s philosophy on plays, translated mostly into language Cowboys players have used in the past.

“I would say we married up our pass looks and our run looks a lot more so we’re less predictable,” running back Ezekiel Elliott said. “I think that’s probably the (biggest) change.”

The smallest change, of course, is that Moore remains the man who will communicate the plan to quarterback Dak Prescott beginning Sunday night at SoFi Stadium against the Rams. McCarthy insists that was important.

“At the end of the day, and I can’t state this enough, Kellen Moore (is) the coordinator and he’s the play caller,” McCarthy said. “So he has to be in total confidence and familiarity and comfort in what we’ve put into all our installation. And that’s something that has been emphasized at every decision on what was in the offense and what was not in the offense.

“I really love the versatility, but by no means did we put a number on, ‘This is my play and your play.’ Football is still football.

“I’ve gone out of my way to not make Kellen feel like I’m trying to step on his toes.”

Charting a path to victory

The Cowboys hired McCarthy on Jan. 7 with a clear expectation: contend for a Super Bowl.

“Trust me, I knew the day I walked in this building what the expectations are and always will be with the Dallas Cowboys,” McCarthy said. “I think it’s a blessing to be able to line up and have an opportunity to go out and win, especially when you expected to win.  That is the only way you can go about the game of football. That is the only way I have ever approached it. I have never lined up in any contest when I didn’t expect to win.

“There is a path to victory every single time you line up as a team.”

McCarthy, Moore and staff spent spring and summer — at times in person, at times virtually — charting that path.

Initially, after McCarthy’s hire, the slew of new coaches joined Moore and Doug Nussmeier (tight ends coach in 2019, quarterbacks coach in 2020) to analyze thoroughly what went right and wrong in Dallas in 2019. Moore detailed the principles that enabled the offense to chart gaudy numbers, as well as the ones that made it inconsistent to the point the team failed to rally from any of eight games they trailed at the half. McCarthy, in his early days in Frisco, lent insight formed from a 12-year study of his Packers passing game. They completed their first round of analysis in February.

The last week of February, the coaching staff attended the scouting combine with an eye on wrapping the second review of the offensive scheme by March 6. How could they massage McCarthy’s Green Bay wrinkles into the foundation Moore knew and powered? What trends would they consider? Mid-march, McCarthy figured at the time, they’d huddle at the Star for installation meetings. McCarthy was eager to run the principles by Prescott.

“It’s exciting,” McCarthy said between servings of shrimp cocktail appetizer over lunch on Feb. 26. “You always want to go through it once with the quarterbacks because they are going to ask the best questions. There are usually things that come up in that first time through that you are able to tweak before you (install) the offense.

“We still may have time to do that.”

Instead, in the weeks that followed, the pandemic shuttered NFL facilities. The Cowboys placed the $31.4 million exclusive franchise tag on Prescott on March 15, but he didn’t sign it until June 22. Free agency, the draft and COVID-19 protocols swarmed a coaching staff that barely had time to learn its way around the hallways. Not until Aug. 2 did McCarthy meet his team in full.

Today, 208 days later, he had his first opportunity to meet his veteran group in person (📹: @dallascowboys) pic.twitter.com/ZnF3nBfKvA

Prescott would come to learn McCarthy’s emphasis not just on how to play but how to react through a myriad of considerations. He’d learn the stages of McCarthy’s “quarterback school,” the mechanical runthrough all players at the position go through to start each practice: throwing into a netted target, footwork repetition and a heavy emphasis on 2-minute drills.

“He’s huge when it comes to any way to teach about the game of football, situationally or not,” Prescott told USA TODAY Sports. “They do a great job of putting every situation up in the world that could come up to make sure we’re aware for and that we’re ready to capitalize on it when they come up so we can take advantage of it and won’t be behind.”

And yet, McCarthy was careful as he taught wrinkles to continue emphasizing Moore’s freedom. Early in camp, McCarthy sat Prescott down with a message.

“Just the importance of it being Kellen’s show and the way that he does things,” Prescott said. “Majority of the quarterbacks you look in the league that have had a lot of success have stayed in the same system, so that was the big importance for him to keep me and the rest of this offense in the same system and take what we’ve done over the past few years and grow on that.

“We’ve had some success, but we’re just trying to take that to the next level, and that’s what (McCarthy) offers us.”

Continuity for the Cowboys offense will come in several forms.

Moore will still be piping plays into Prescott’s ear. The Cowboys return Prescott and Elliott as foundational pieces entering their fifth seasons. Receivers Amari Cooper and Michael Gallup, who each posted more than 1,000 yards in 2019, will threaten secondaries.

But their supporting cast has evolved. Shifty running back Tony Pollard is expected to see more time than he did as a rookie, including in some of the same snaps as Elliott. With Jason Witten in Las Vegas, tight end Blake Jarwin has emerged as a vertical threat, Dalton Schultz a stout blocker. Previously injured receivers Cedrick Wilson and Noah Brown flashed in training-camp practices.

The possibilities leave owner Jerry Jones giddy describing why he thinks this offense — and McCarthy’s team as a whole — will be “probably harder to get a beat on.”

“A McCarthy team will have ambiguity about it,” Jones said. “The defense won’t be able to line up and beat up as well on them. … And that’s by design — that’s part of him.”

Prescott isn’t shying away from the hype that the Cowboys — whose 27.1 points per game last season ranked sixth in league — could routinely drop 40 on opponents.

“For sure,” he told USA TODAY Sports on Tuesday over videoconference. “I think if we don’t have those expectations and almost make that a standard for ourselves, we’d be cheating ourselves and limiting ourselves. I mean, we’ve gone tons of talent.

“It’s going to be interesting to see what a defense tries to do to stop all the weapons we have.”