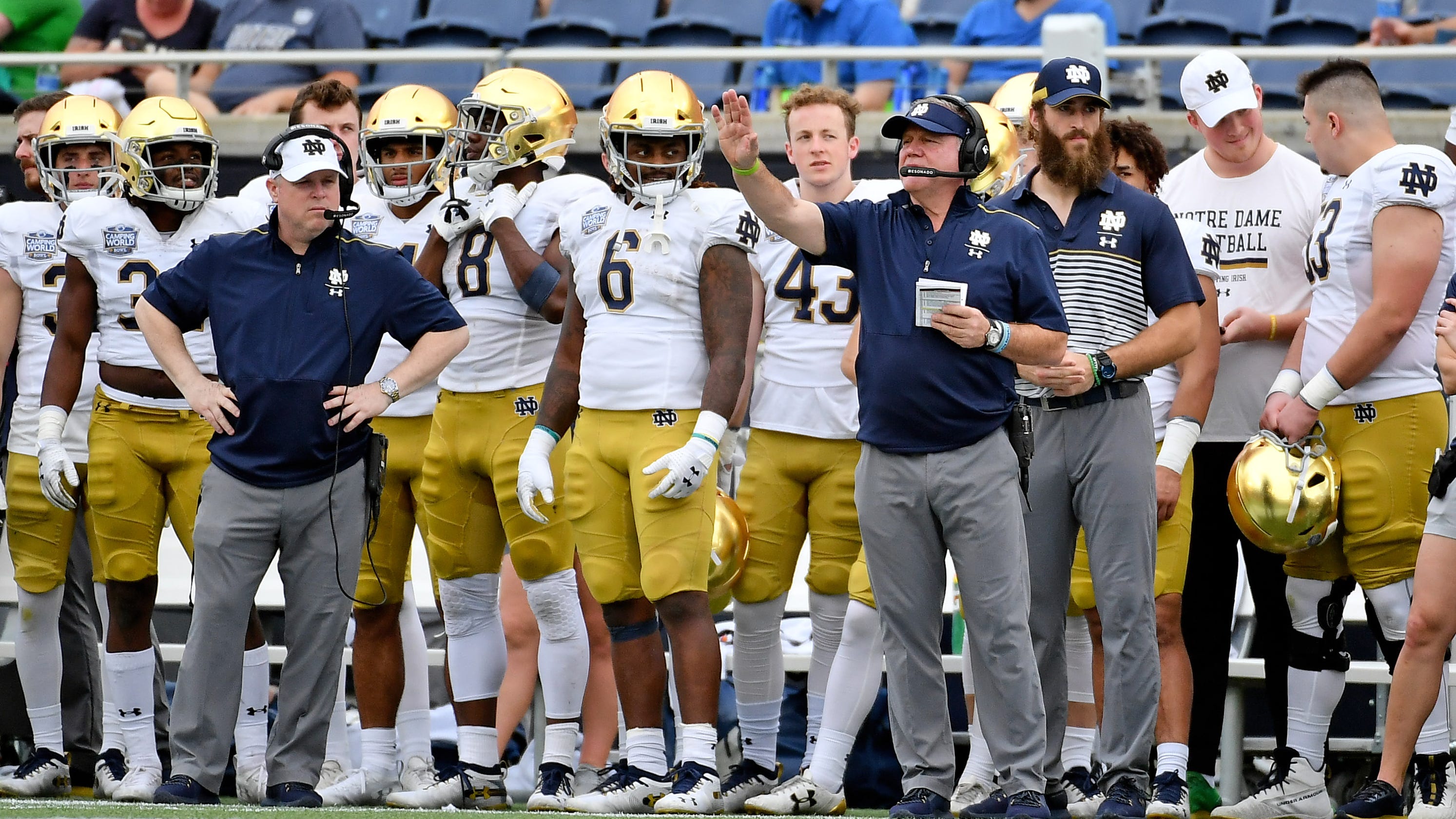 • A sentence that’s never been written before now — Notre Dame football is tied for first place in the conference following Saturday’s win. The Irish are playing this season as a member of the Atlantic Coast Conference.

• Sophomore safety Kyle Hamilton made seven tackles, second most on the team, before leaving in the third quarter with an apparent left leg/ankle injury. If there’s one guy the defense cannot afford to lose, if this team cannot afford to lose, it’s No. 14. No Hamilton changes everything in the back end of the Irish defense, and not for the better.

• Irish sophomore Kyren Williams showed why he wrestled away the starting running back spot in fall camp. Williams ran for 112 yards on 19 carries with two touchdowns. Williams rushed for all of 26 yards on four carries last season.

• No Notre Dame player missed Saturday’s game because of a positive coronavirus test or possible virus symptoms. NBC reported that Irish coach Brian Kelly learned at 9 a.m. Saturday morning that his entire roster, other than previously-injured players, was cleared to compete.

• Blink and you’d have missed Notre Dame’s first offensive possessions under new coordinator and former quarterback Tommy Rees. Under the 28-year-old Rees, the Irish ran three plays and gained (-1) yard the first time out. The Irish went three and out the second time out with six yards gained. Another three and out followed on the third play with nine total plays for five yards. Many expected more. And better. Sooner than later.

• The Irish needed 13 plays before getting their first first down. They finished with 439 total yards.

• Maybe there is something to freshman Chris Tyree and his “electric” reputation garnered during preseason camp. First time Tyree touched the ball, he took a kickoff back 38 yards. There’s an extra burst there. So what if he’s listed at 5-foot-9 1/2 and 179 pounds. He can play. Now. Three series in, Tyree was in the backfield.

• Much was made in preseason of how the Irish defenders could fly to the football and make plays. Early on, the group looked slow and unsure while rotating through the two-deep at several positions. Just over halfway through the first period, the Irish trailed 3-0. The Blue Devils did much of what they wanted in tallying a combined 124 yards those first two drives. It was hard for the Irish to tackle early.

ACC: No. 19 UNC shakes off rust, finds form that led to preseason hype

• Joe Wilkins Jr. was the first Irish receiver to catch a pass Saturday. He snared three for 38 yards on the final drive before half. They were the first three receptions of his career. Of all the receivers the Irish had coming into the season, Wilkins seldom, if ever, was mentioned as one to watch.

• Love to get the low-down on this one — one of the play-call signs relayed in from the Irish sideline is the logo of the NBA’s Cleveland Cavaliers.

• Big fan of the Kyren Williams/Daelin Hayes half-jersey look. That’s old-school Notre Dame, like back to the 1980s and early 90s. Also screams swagger. More, please. Now if Williams can only keep his helmet on. It came loose three times early in the second quarter, including after his touchdown run.

• Prior to Williams’ 26-yard touchdown run midway through the third quarter, the longest Irish run belonged to … punter Jam Bramblett, who rumbled 14 yards on a fake deep in Irish territory in the first half.

• Duke’s offense looked a whole lot better — and comfortable — its first three drives than it did in four quarters last year against Notre Dame. That night in Durham, N.C., the Blue Devils tallied only 197 yards in a 38-7 loss. Three series into 2020, Duke already had 142 and 246 by halftime.

• Classic news dump alert — Notre Dame announced at the end of the first quarter that Kelly had signed a contract extension through 2024. That’s been in the works for months. They couldn’t throw the media that news bone in June or July or August?

• Official attendance Saturday was 10,097. Apparent that was the third-smallest crowd in Notre Dame Stadium history. Current capacity of the stadium is 77,622 with a projected pandemic maximum crowd of 15,520.

• Saturday was one of only three college football games played in the Midwest. The next closest to the one played in South Bend was 431 miles away in Ames, Iowa where No. 25 Iowa State lost to Louisiana-Lafayette. There were two games in other regions — at Pittsburgh (East) and at Louisville (South) — closer to the Notre Dame campus. Pittsburgh is 381 miles from South Bend. Louisville, where Notre Dame opened in 2019, is 268 miles away.

• What is it about Duke being the opener for major Notre Dame sports? In 2014, the Notre Dame men’s basketball team opened its ACC affiliation with a home game also against Duke. Remembered as the Pat Connaughton dunk over Jabari Parker game, the Irish won that one, 79-77.