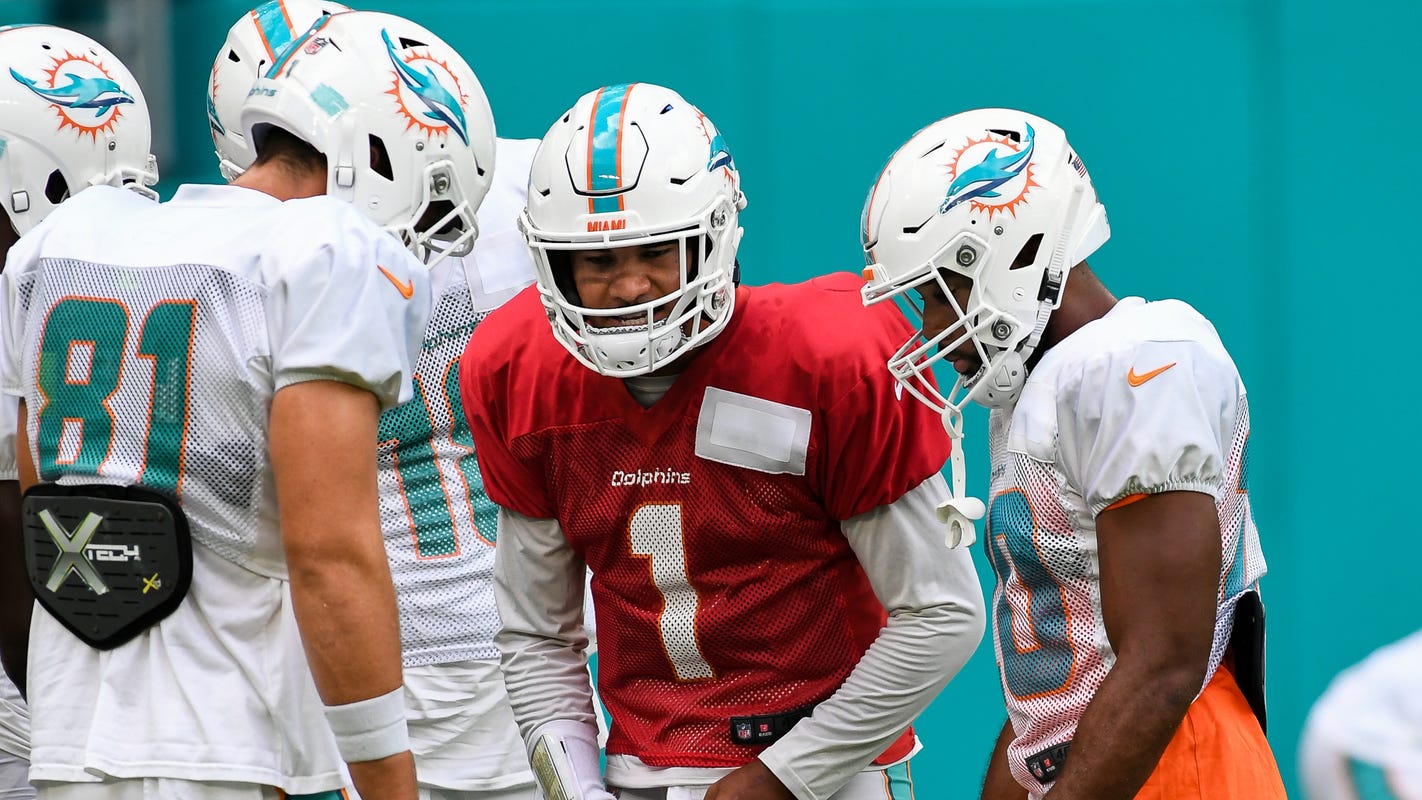 There’s going to come a moment when Ryan Fitzpatrick isn’t firing on all cylinders and everything that Miami fans have been hoping for is right in front of them on the sideline and the change is going to happen, if not at that precise moment, soon thereafter.

“I don’t know how much time it’ll be before Tua is in the lineup,” said Fitzpatrick, the 37-year-old starting quarterback. “I know that I am the placeholder.”

And Tua Tagovailoa‘s time will arrive.

Fitzpatrick will happily pass the torch to Tua, the 22-year-old rookie out of Alabama. And he’ll do it because Tua is not only accurate and poised but also humble and gracious.

“How he presents himself in the building and how he shows Fitz that he’s willing to learn and not like, ‘Hey, this is my spot’ or something like that,” offensive lineman Jesse Davis said of Tua. “It’s very nice to see a young star like that come in and be ready to work.”

There are so many similarities between Fitzpatrick, one of the great leaders Miami has seen in the past 20 years, and Tua, the quarterback who has energized the Dolphins franchise and its fan base, in a way perhaps unlike any player since Dan Marino.

Mostly, it’s that people want to be around them. And they want to play well for them.

Of all the attributes that quarterbacks would like to have – arm strength, mobility, quick release – it’s the intangibles that are too often overlooked.

“He’s a really good dude,” tight end Mike Gesicki said of Tua, though he may just as well have been speaking about Fitzpatrick.

The Dolphins drafted Tagovailoa with the fifth overall pick, and they cut Josh Rosen, who was once selected with the 10th overall pick, because they view Tua as the clear future face of the franchise.

Tagovailoa instantly was the most popular player on the team and online stores can’t stock his #1 jerseys fast enough. The expectations are immense. The excitement is palpable.

“I’m chasing to be the best Tua that I can be both on and off the field,” Tagovailoa said at the end of training camp.

In the second half of August, Tagovailoa showed coaches, media and his teammates that he had made great progress, after a slower start.

“He has an arm,” Dolphins defensive back Eric Rowe said. “He can put zip on the ball. I’ve noticed through camp that he’s gotten better with his eyes. At safety, we just kind of read the quarterback and beforehand, he was kind of staring down at routes, but he’s gotten a lot better with his eyes and from what I can tell, his progression. Obviously, he’s only going to keep getting better.”

Did Tagovailoa wow in ways Marino is said to have from his first day as a Dolphin? No, but these are players with completely different skill sets. Marino brought the howitzer. Tua possesses a precision laser. Tua is more Drew Brees than John Elway.

And how badly would the Dolphins, after having famously passed on Brees, like Tua to perform up to that level?

“When he does get his shot, I think he’s going to do very well,” veteran guard Ereck Flowers said.

Which brings us to when.

Year after year, coaches and general managers have set out with the intention to allow their rookie quarterback to watch and learn. And it almost never lasts. Without fail, the rookie quarterback, especially first-rounders, plays sooner than expected.

In the last 10 years, half of the 20 first-round quarterbacks selected in the Top 10 picks started the first game. It has long been projected that Tua would not do that.

On average, those Top 10 quarterbacks started in Week 4 of their first NFL season.

Miami, in all likelihood, would prefer to see Fitzpatrick play so well that a decision extends at least into November. But, again, best laid plans often go awry.

So, yes, it is certainly possible Tua’s time could arrive as early as Game 6 (at Denver) or Game 9 (at Arizona) or Game 10 (Jets) or perhaps for Game 11 (at Jets), after a bye. Whenever it happens, it certainly figures to last longer than the Rosen era did.

Rosen started three games last season, Games 3, 4 and 5, after playing a handful of snaps in the first two blowout losses. It never really felt like coach Brian Flores was anywhere close to enamored with Rosen as he was with Fitzpatrick.

“He’s a really interesting guy,” Fitzpatrick, who is just about an assistant head coach to Flores, said of Tua. “He’s got a lot of energy to him and you can just tell that guys are going to gravitate to him. There’s something about him that is just very likable and I can already tell that he’s going to be one of those guys that gets along with everybody, that guys are going to want to follow. He just has that kind of aura about him.”

After all, Tagovailoa is the young man who sang songs and played a ukulele in a hospital bed shortly before surgery to repair a badly-injured hip that cut short his last college season.

The thing that perhaps has surprised Miami players most is Tagovailoa’s mobility. He has looked good throwing on the run. He appears a threat to scramble.

“Me personally, I can’t tell that he was injured before,” running back Jordan Howard said.

It would be wonderful if Miami could get into November without playing Tagovailoa. Perhaps Fitzpatrick is playing well and the Dolphins are in the playoff hunt. Perhaps Miami could get to or close to that one-year mark (Nov. 16) following his serious injury while playing against Mississippi State.

But the Dolphins clearly believed Tua is close enough to be ready to have let Rosen go when final rosters were set on Saturday. In all likelihood, he suits up in aqua and orange for Week 1. And when Tua does take over, when the placeholder is replaced, Fitzpatrick believes the rookie will succeed.

“I told him I’m going to do the best I can to lead this team and to win football games,” Fitzpatrick said. “Whenever it is that Tua gets his chance, whether it’s early or late or whenever it is, I’m going to be his biggest cheerleader.”