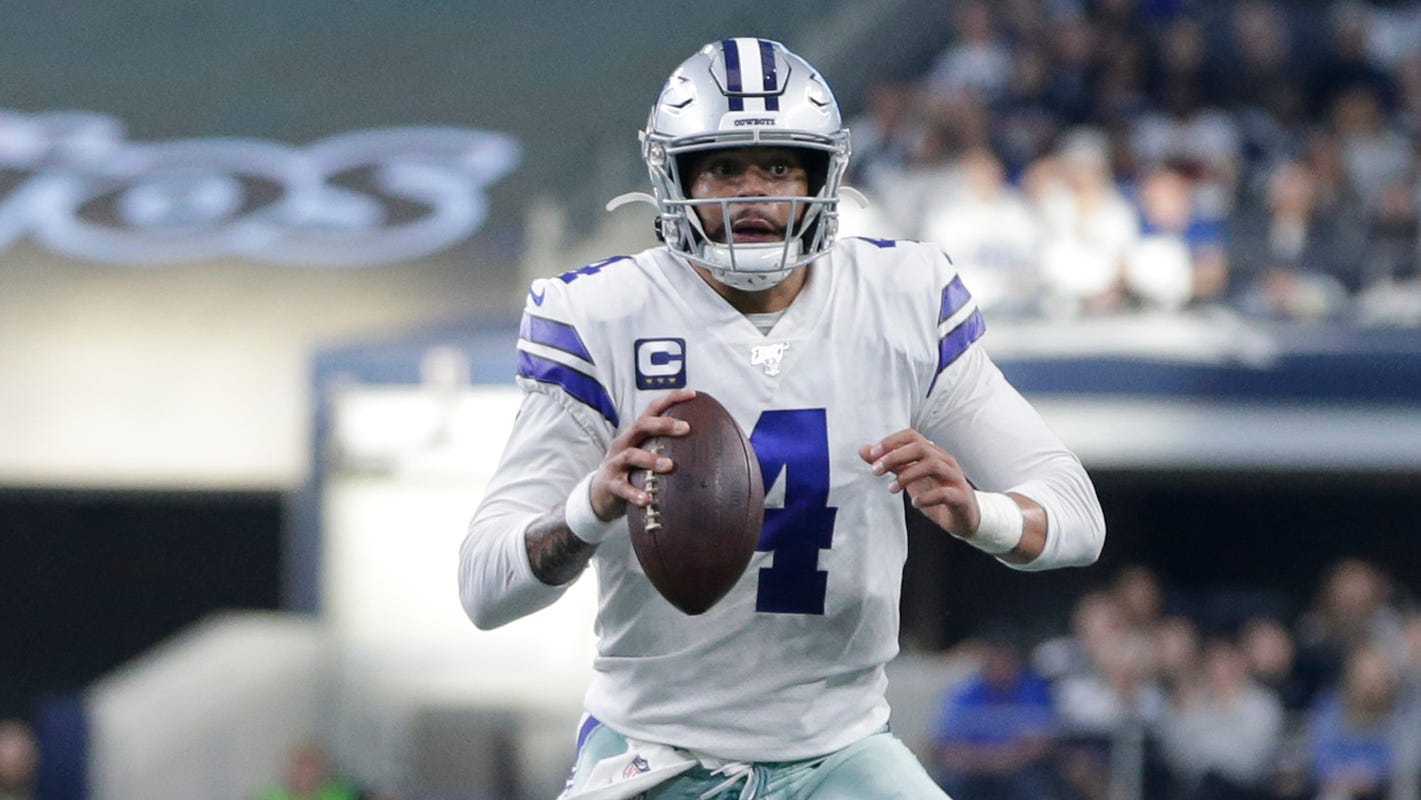 SportsPulse: Jori Epstein connected with Cowboys stars Dak Prescott and Ezekiel Elliott to get their perspective on Prescott’s long term status with the team.

Stephen Jones said his fatherly advice would have been different.

Had his own son asked the Cowboys executive vice president whether to take a hard-line stance in negotiating with the Cowboys, Jones says he would have told his son to take the money more than a year ago.

Even so, Jones admits quarterback Dak Prescott has reaped rewards waiting for a long-term deal. Prescott has gambled and appears to be winning.

“I admire him because he never blinks,” Jones said Friday on Dallas radio station 105.3 The Fan. “I’d have said, ‘Run in there and take that big guarantee and sign up.’ But I do think he’s made money playing it out. We’ll see what happens with the cap and how the virus affects our revenues for the upcoming couple of years.

‘But in general, barring something like that where we really continue to struggle from a revenue standpoint of no fans and reduced revenue…he’s bet on himself and bet wisely. He’s answered every bell, every call.”

The Cowboys and Prescott began negotiating a long-term deal in spring 2019 after Prescott played three seasons in the league, starting every game after Dallas selected him in the fourth round of the 2016 NFL draft.

But two offseasons of conversation—2020 much less active than 2019—have proved fruitless. The Cowboys placed an exclusive franchise tag on Prescott in March, Prescott signing the $31.4 million guaranteed tender in June. The Cowboys and Prescott’s agent Todd France had no meaningful conversation about a deal before the July 15 tag deadline, multiple people with knowledge of the conversations told USA TODAY Sports. The people spoke on condition of anonymity due to the sensitivity of negotiations.

One clear point of contention: Prescott wanted a deal no longer than four years, so he could return to an increasingly rich negotiating table sooner. The Cowboys wanted to extend him for at least five seasons to maximize cap flexibility.

Dak Prescott’s only under contract with Cowboys through 2020. But Ezekiel Elliott can’t imagine this team without his QB.

“It’s so difficult for us, even,” Jones said. “We’re talking about a situation where he’s going to represent so much of your salary cap. I think he understands where we’re coming from. We’re trying to get in a situation where we can keep Dak surrounded by great players.

“The only thing Dak is missing from Patrick Mahomes is winning that Super Bowl. That’s what we want for him. I don’t think he would ever question our will and our want to surround him with great players. We picked CeeDee Lamb with the first pick in the draft, and we’re loading him up to be as successful as a he could possibly be.”

BAYLESS: Addresses comments about Prescott’s depression, does not apologize

Jones said he understands the increasing value Prescott has commanded as time stretched on. Since April 2019, seven quarterbacks have signed deals worth at least $32 million per year. Most recently, Texans quarterback Deshaun Watson signed a four-year extension worth $39 million per year. Their resumes are similar.

Prescott’s won 62.5 percent of his 64 league games while Watson has won 64.8 percent of his 39. Prescott’s 97 passer rating and 65.8 percent completion rating are just below Watson’s 100.5 and 66.7. Prescott, meanwhile has rushed for 21 touchdowns to Watson’s 15. Prescott’s durability has enabled him not to miss a start for the Cowboys, while Watson tore his ACL in the seventh game of his rookie year. Each quarterback has won one playoff games in three tries.

SportsPulse: Jori Epstein breaks down the Dallas Cowboys chances of making the Super Bowl this year and why their Achilles heel isn’t actually on defense but a unit that’s traditionally been their strong suit.

Prescott considers Watson’s deal a win for Watson and a win for himself.

“I believe—I’m not going to say I believe I’m always right,” Prescott told USA TODAY Sports Tuesday over videoconference. “But I have confidence in the way I go about things.

“I’m happy for Deshaun and all the rest of the guys.”

For now, Jones says, neither side has hurt too much from the extended negotiation. Prescott remains in Dallas, scheduled to make almost as much in the Cowboys’ season opener as he did from the club in all of 2019. The Cowboys still have their unquestioned leader under center.

Prescott said Tuesday he anticipates being in Dallas “for the long haul.” Jones said Friday that the Cowboys sure hope so.

“I have nothing but respect for where he’s been,” Jones said. “Up to this point I don’t think it’s really hurt anybody. He’s obviously going to make a lot of money this year. And we all know he’s going to make a whole lot more money in the future.

“Certainly, we want it to be right here in Dallas.”