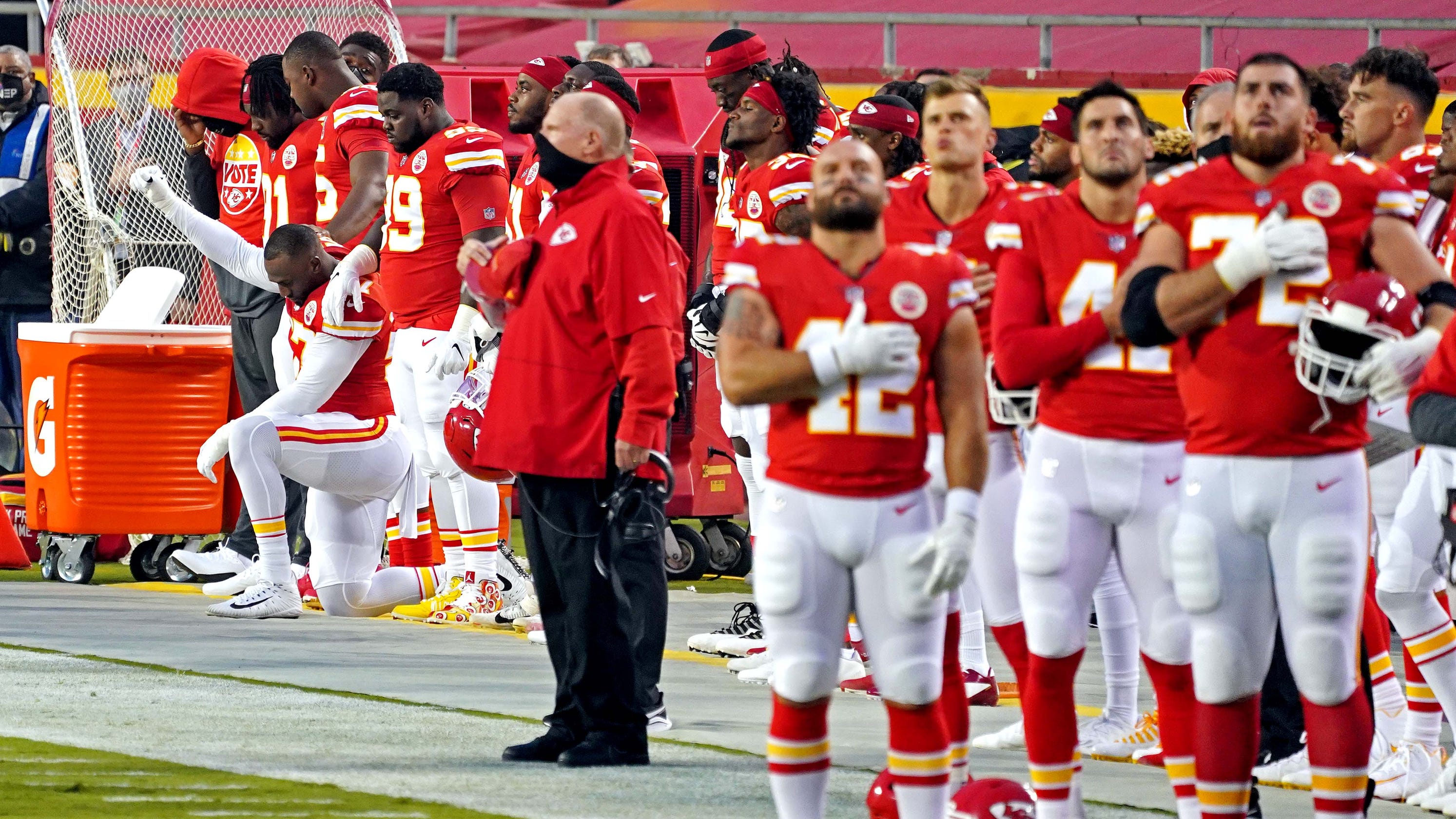 Coronavirus, protests come to the forefront in season opener

KANSAS CITY, Mo. — At last, after what felt like the longest and most arduous offseason in league history, the NFL officially returned on Thursday night.

The Kansas City Chiefs raised their Super Bowl banner and proceeded to dispatch the visiting Houston Texans 34-20 at a sparsely attended Arrowhead Stadium. But the final score, the stats and highlight plays …. none of them matter in the grand scheme of things.

Defiance and determination of a league, whose owners and chief executives resolved throughout the offseason that they would not bend to the deadly pandemic that nearly brought our country to a complete halt in the spring and has altered our way of life at virtually every turn.

Defiance and determination of players, who this offseason had finally seen one too many persons of color fall prey to police brutality, systemic oppression and racism, and thus committed to using their platforms to demand change, regardless of whomever their message angered.

So after an offseason in which the league and its players simultaneously battled wars on multiple fronts, on Thursday night, the two sides came together and flexed on a national stage, each determined to send clear messages:

The Shield, as the league is known, is indeed as powerful and unyielding as owners always believed it was.

And the unified voices and wills of a couple thousand purpose-driven men will not be silenced, and efforts centered on cultivating long-lasting change will not be ignored.

It was one game, one night in the spotlight. But for the NFL and its players, Thursday night was the only evening that mattered. The season opener sparked and continued the motion necessary to bring the league, its players and their fans to their desired destination.

Months ago, the idea of the NFL opening the season on time seemed virtually impossible. Analysts, reporters and medical experts all watched with skepticism as everyone from Commissioner Roger Goodell to NFL Players Association executive director DeMaurice Smith to chief medical officers of both the league and players’ union declared their intention of contriving a plan that would provide the league safe working conditions, testing schedules and modified financial arrangements that would provide for an on-time start to the season.

COVID-19 forced the alteration of the NFL draft. It robbed teams and players of offseason programs and preseason games. But determination and a vigilant approach to the implementation of testing, safety and prevention measures ushered the league through an altered training camp schedule. The steadfastness enabled the league to survive a wave of false positive test results that briefly threatened to shut down multiple team facilities. And in the last few weeks, the COVID-19 numbers steadily decreased to the point that only one player tested positive in the most recent round of testing, no team experienced an outbreak of any kind and the Chiefs-Texans opener kicked off without a hitch.

Never underestimate the persistence of billionaires.

Meanwhile, for many NFL players, the offseason represented the stirring of the soul and the awakening of a call to become more than athletes.

The killings of Ahmaud Arbery, Breonna Taylor and George Floyd ignited a fire within the NFL player membership. Many high-profile players of all races were angered to the point they could no longer sit silently and let a few of their brethren wage war on racism. Together, they purposed to use their voices to speak for the voiceless. Together, they lobbied the NFL and the owners to use their influence to lobby lawmakers for reform.

It mattered not that they faced the risk of alienating a portion of the league’s fan base, those Americans who had stubbornly miscast Colin Kaepernick’s protests in 2016 as unpatriotic, anti-flag and anti-military. It mattered not that one of the loudest opponents to their cause holds the highest office in the land.

The league’s brightest stars — including Patrick Mahomes and Deshaun Watson, who faced off Thursday night — understood that together, their voices could not be ignored.

And they were right. Goodell lent his voice to the cause, admitting that he and league leadership had erred in not listening as players tried to draw attention to the country’s problem with racism and police brutality towards people of color. The league listened to what mattered to its players and launched multiple initiatives designed to help bring about change in the form of voter registration, education, prison reform and more.

Owners and teams made statements that they, too, believed that Black lives matter and intended to become better allies.

So, Thursday night, the stage was set for the season opener, but also for the players’ messages to continue to reach the nation. “End racism” was painted on the boarder of one end zone at Arrowhead Stadium. “It takes all of us,” was painted on the other. Signage and video boards reminded fans to vote and declared “Black Lives Matter.”

And before kick off, the NFL played “Lift Every Voice and Sing” after a video highlighting the Black struggle and unyielding hope. The Chiefs took the field for both the playing of the song known as the Black national anthem and for the playing of “The Star-Spangled Banner.” The Texans remained in the locker room but joined the Chiefs immediately afterward at the center of the field. The men stood together, arm-in-arm, hand-in-hand.

Proudly, they stood during a requested moment of silence to promote racial equality in America. They bravely stood despite a smattering of boos rained down from the ignorant minority among the fans.

“The story was told there,” Chiefs coach Andy Reid said after the game. “Whether it was the national anthems and how those were presented, the singers — Alicia Keys was phenomenal — and then guys joining hands together for a cause. Really, just to make us all better and a stronger country than we all are. We have a chance to be unstoppable when we all come together.”

Never underestimate the resolve of players, who now understand the power of their influence ever again.

With their protests and signs of unity complete, the Texans and Chiefs turned their attention to football.

Mahomes and the Chiefs’ offense dazzled as always. Watson provided his usual highlights, although he and his teammates came up short. And Game 1 of Week 1 came and went without a hitch, without a coronavirus-related absence and without a single justice-seeking player silenced.

Sunday and Monday feature the remaining 15 games of the Week 1 slate. And until the games pass and teams return to their headquarters and resume testing, we won’t know how effective the league’s health and safety measures for a non-bubble-execution of play will prove. There’s no way to know if the league can avoid an outbreak.

But for Thursday night, the NFL chalked up a win in its COVID-19 battle.

Meanwhile, it’ll take much longer for the results of the players’ fight against racism to truly manifest. Hearts and minds must change, and it’s harder to measure true intent of individuals.

But the voices are being heard. The messages are being conveyed. Despite the teeth-gnashing of some fans who hate to acknowledge the problems being highlighted, the players will continue to use their platforms in an attempt to spark change.

Thursday night represented the celebrations of defiance and determination, and the league and its players hope that the payoffs for their efforts extend well beyond Game 1 of Week 1.