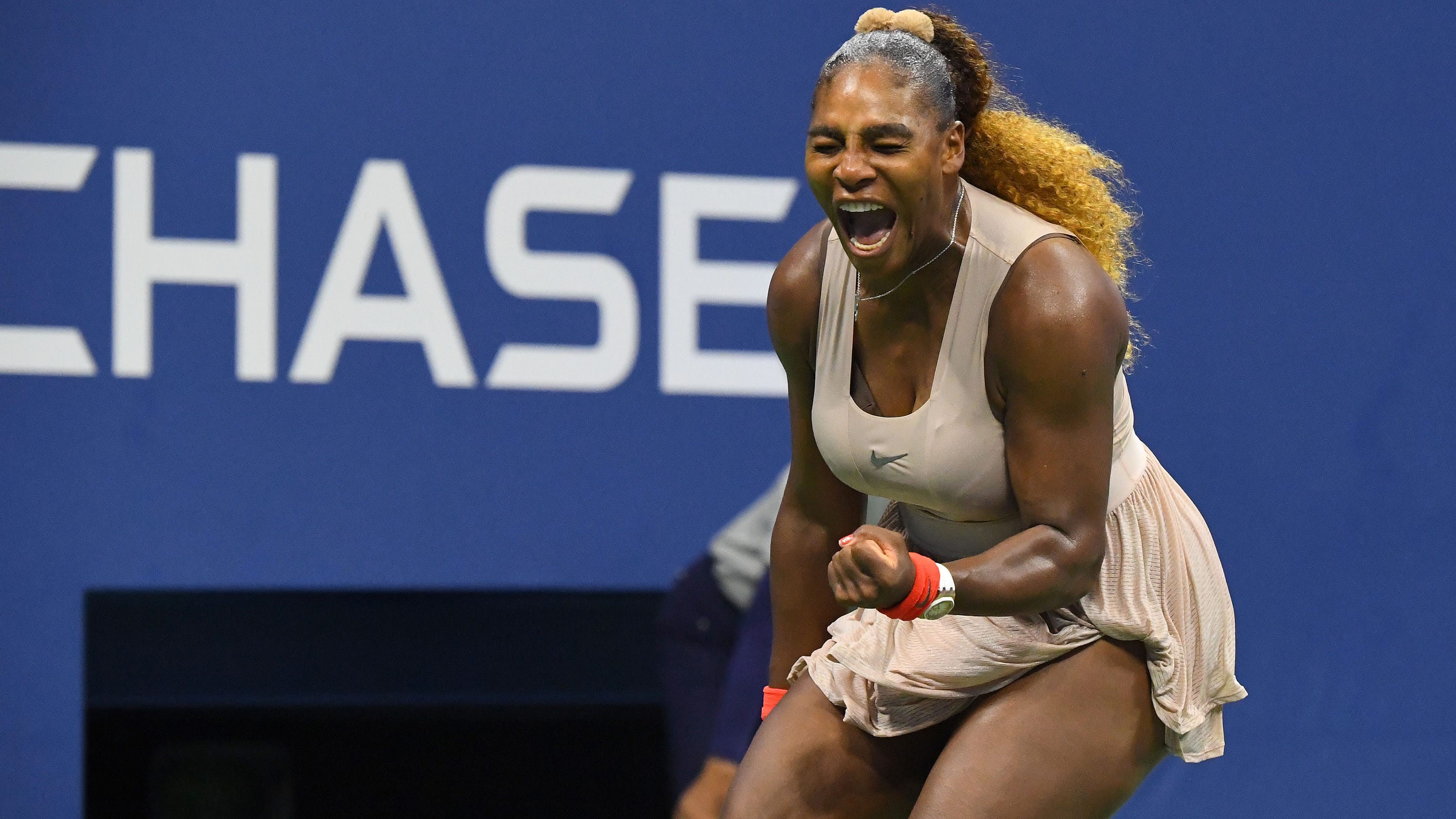 At least she went for it. By this point in Serena Williams’ career, where every match she plays should be considered gravy, that’s really all you can ask.

No, Williams will not win her coveted Grand Slam title No. 24 at this year’s U.S. Open. In an extraordinary semifinal that looked for awhile as if it would be hers, Williams lost to Vika Azarenka, 1-6, 6-3, 6-3. But at least she went for it.

For once in the post-motherhood portion of her career, this wasn’t Williams getting tight in a big match and spraying errors all over the court as she has in recent Grand Slam finals. It wasn’t about playing passively as she did in the Wimbledon final last year or losing rhythm on her serve as she did last year at the U.S. Open against Bianca Andreescu.

This time, Williams played big. She didn’t just hit groundstrokes, she walloped them. Her serve was on point. At every big moment, she grunted and screamed and pumped herself up. It was a very good performance. It just wasn’t good enough.

Maybe that’s not much of a consolation for Williams. At age 38, the reason she’s out there is to add Grand Slams to her legacy, including winning one as a mother. With each opportunity that passes by, the window closes that much more.

But the odd thing about watching Williams try and fail to get one more is how often it seems like she walked on the court as if she felt the pressure of trying to win her first. The advantage of being considered the greatest player of all time is that you don’t really need to win anymore. For some reason, Serena has often played in these big matches over the last few years as if she had something to lose.

This time, just getting to the semifinals had been a real labor. She’d come from a set down in the third round to beat Sloane Stephens. She survived being down a break in the third set against Maria Sakkari in the fourth round. Her three-set quarterfinal against Tsvetana Pironkova was anything but straightforward. It was clear, both in the U.S. Open and the two tournaments that preceded it, that her level of play was not particularly high.

That’s what made Thursday’s first set so breathtaking. Unlike her earlier performances, Williams came out determined to start fast and play aggressively. She was hitting the ball so hard, it looked like she was practically throwing her body into every ground stroke. There was nothing nervous or tight about the way Williams was playing. She was going for it.

Given everything Williams has accomplished and the plain reality that she isn’t physically what she used to be — Who is after more than 20 years playing professional tennis? — that is the blueprint. That’s the way she has to play against a top-level opponent if she’s going to win another Grand Slam. After 23 Grand Slam titles — the most in the Open Era — it’s time to go for broke and let the chips fall where they may.

It almost worked. For a set, Williams was blasting Azarenka off the court with power and precision. She was stepping in on the return and hitting clean winners. Everything was going her way, and against most opponents, that would have been more than enough.

But Azarenka, despite losing far more to Williams than she has won over the years, is one of the few with the self-belief to turn a match like that around.

Williams didn’t play much differently in the second and third sets; Azarenka just figured out how to absorb it. In the second set, she had 12 winners and one unforced error. In the third, she made 75 percent of her first serves and had just six errors. That’s about as well as anyone could play against Williams under those circumstances.

Serena shouldn’t have any regrets about how she played; on the contrary, it’s how she should try to play more often in high-stakes matches. It just so happens that this time she got beat.

At this point, we all have to acknowledge the odds are against Williams getting No. 24. Whether that number means anything to her legacy is up for debate. There is no way to compare Margaret Court’s 24 Grand Slams in a totally different era to Williams’ 23, particularly given that Court won 13 of them before the so-called Open era when only amateurs were allowed to compete.

But reaching that number seems to have at least some impact on Williams continuing to grind for these titles. She said Thursday she plans on going to Paris and playing the French Open, which is played on a more difficult surface for her than the fast courts at the U.S. Open.

By next year’s Australian Open, she will be 39. Her conditioning, her movement and her ability to avoid injuries will be more of a question mark every year. And unlike the men’s game, where it takes a pandemic and a fluke disqualification for the younger generation to win Slams, women’s tennis is filled with fearless young stars who don’t play with deference when Williams is on the other side of the net.

But if there’s any silver lining coming out of this year’s U.S. Open, it’s that a Serena who is committed to playing power tennis and going for broke can still be a really great player in a big match. If she can somehow get to another Slam final, that may be the blueprint that allows her to break through.