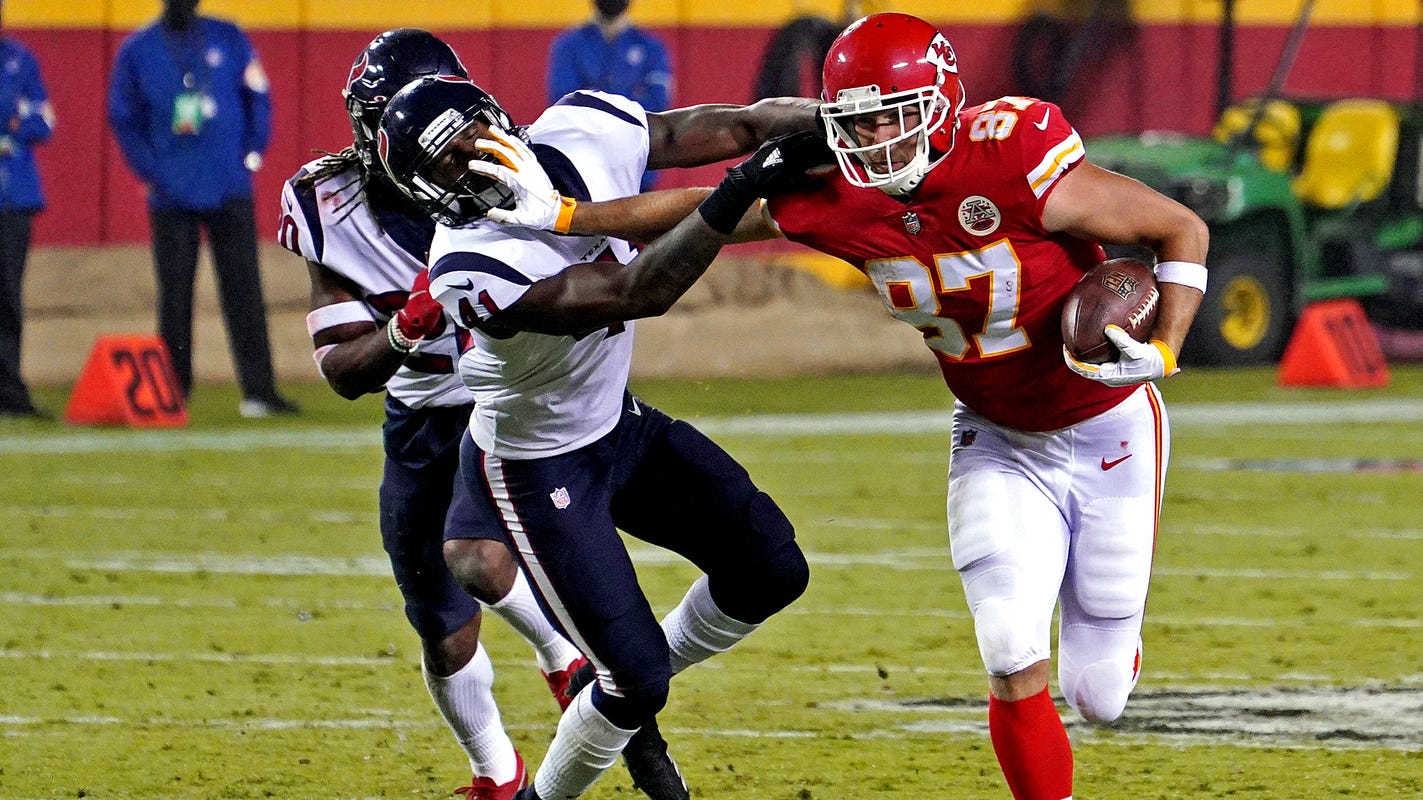 For the first time since Super Bowl LIV, NFL players took the field Thursday night to face someone other than their own teammates.

With preseason games canceled and training camps shortened amid the coronavirus pandemic, teams have slowly worked their way back into form for the season. But now, with the league having returned just five positive player tests for COVID-19 since Aug. 11, the NFL hasmade its return.

The Kansas City Chiefs kicked things off by vanquishing the Houston Texans, 34-20. USA TODAY Sports broke down the entirety of the game as it happened, with reporter/columnist Mike Jones covering the game live in Kansas City and NFL editor Michael Middlehurst-Schwartz adding analysis. Here’s a look back at the game

CHIEFS 31, TEXANS 20 — Deshaun Watson takes it in for the 1-yard scoring run. Lots of people who didn’t watch this game will see the score and get the wrong impression of how close it was.

Chiefs 31, Texans 13 — Texans WR Randall Cobb didn’t notch his first reception or target until a few minutes remained in the fourth quarter. Bill O’Brien and offensive coordinator Tim Kelly will have to answer for why one of their key free-agent signings was practically invisible for most of the game.

CHIEFS 31, TEXANS 13 — Houston manages to cut into Kansas City’s lead thanks to Jordan Akins’ 10-yard touchdown catch, but it’s clear that the Texans’ offense has work to do. Without DeAndre Hopkins, the passing attack hasn’t been able to make anything work downfield, though the offensive line has done Deshaun Watson’s few favors.

CHIEFS 31, TEXANS 7 — Kansas City would like to remind you that you’ll have to account for Tyreek Hill, too. The four-time Pro Bowl wide receiver had been relatively quiet for most of the night, but he handily beat Bradley Roby for a 3-yard touchdown on Patrick Mahomes’ third scoring throw of the night. The Chiefs have now scored 31 unanswered points after being in that 7-0 hole — shades of January, albeit on a smaller scale.

Chiefs 24, Texans 7 — Clyde Edwards-Helaire isn’t the only Chiefs rookie showing off tonight. L’Jarius Sneed, the fourth-round cornerback out of Louisiana Tech, hauled in an interception and returned it 39 yards, though safety Tyrann Mathieu set it up with his pressure on Deshaun Watson. If Sneed can continue to hold up in coverage, he’ll be a key asset for Kansas City as it manages Bashaud Breeland’s suspension.

Chiefs 24, Texans 7 — Houston invested big in left tackle Laremy Tunsil in hopes of stabilizing its offensive line, but it still looks there’s a problem on the right side. Right guard Zach Fulton has been overwhelmed by Chiefs defensive tackle Chris Jones, and right tackle Tytus Howard hasn’t been up to the task against Chiefs defensive end Frank Clark. Those two players constitute quite the test, and Deshaun Watson has only been sacked twice, but the Texans need to find a way to avoid repeat performances on this front.

CHIEFS 24, TEXANS 7 — There’s likely a collective “gulp” from NFL defensive coordinators as they watch the Chiefs’ attack tonight. As if the unit’s returning pieces weren’t formidable enough, rookie RB Clyde Edwards-Helaire is giving a new flare to the running game, eclipsing 100 rushing yards on his electric 27-yard touchdown scamper. And don’t overlook the impact of offensive guard Kelechi Osemele, who signed with the team as Laurent Duvernay-Tardif’s fill-in and has been bulldozing opponents all night.

Rookie RB Clyde Edwards-Helaire is out here juking people into next week.

Expectations after his Super Bowl victory and massive contract extension don’t seem to have had any impact on Chiefs quarterback Patrick Mahomes.

The fourth-year pro directed two impressive first-half scoring drives to give his team a 17-7 lead at halftime. It’s hard to imagine Mahomes being better than he already is, but during the offseason and preseason, he talked about wanting to get to the point where he saw and anticipated things even more effectively. He certainly appears to be doing that in the season opener. He had his way with the Texans defense, many times, delivering clutch passes at just the right time. He’d hold onto the ball just long enough to enable his receivers to get open, and then deliver the pass just in time to beat the rush. His ability to deliver the ball with a variety of arm angles makes him so hard to stop.

On both of the touchdown drives (a 75-yarder and a 91-yarder – both capped with touchdown passes), Mahomes played as if he just had such a good feel for the game that it looked as if everything was unfolding for him in slow motion.

An improved Mahomes is a scary thought for NFL defenses, but it certainly appears that the quarterback’s expectations of growth are realistic.

CHIEFS 17, TEXANS 7 — Kansas City needs just four plays to go 48 yards to set up the easy 29-yard field goal by Harrison Butker at halftime. Not a perfect half for the defending champs, but plenty to like in a season-opening effort. The Chiefs piled up 19 first downs in the first half and managed to mostly prevent back-breaking plays from Deshaun Watson, who has 104 yards on 9-of-16 passing.

Chiefs 14, Texans 7 — Houston squeezed out a few nice plays, including a 15-yard reception by David Johnson and 20-yard catch-and-run by tight end Jordan Akins, but the deep passing attack still isn’t clicking as a third-down pass to Will Fuller falls incomplete. Ka’imi Fairbairn misses from 51 yards, leaving Kansas City ample time to get into field-goal range.

CHIEFS 14, TEXANS 7 — It took 16 plays, but the Chiefs went 91 yards to take the lead on Sammy Watkins’ 2-yard screen. It’s worth tracking how the Texans’ conditioning holds up after this altered offseason, as Kansas City has already run 35 offensive plays in the first half — and will get the ball first in the second.

CAN’T TAKE THIS ONE AWAY FROM THE LIZARD KING 🦎 pic.twitter.com/E3n6CqMWBo

Chiefs 7, Texans 7 — Clyde Edwards-Helaire’s emergence didn’t take long. The first-round running back out of LSU has nine carries for 65 yards midway through the second quarter. While the 5-7, 207-pound back is clearly adding something of a spark to Kansas City’s offense, the passing attack still hasn’t fully taken off.

And a cool moment after a Texans scramble, as Deshaun Watson takes a place on the bench … next to Patrick Mahomes.

CHIEFS 7, TEXANS 7 — Can’t keep the Chiefs down for long, as the Texans well know from last year. Patrick Mahomes caps an 11-play, 75-yard drive by finding Travis Kelce for the easy score. Kelce has already been targeted four times so far this game.

The Chiefs even it up on the TD connection!

TEXANS 7, CHIEFS 0 —  New addition David Johnson didn’t take long to make his presence felt with the Houston Texans, scoring on a 19-yard run for the first score of the game.

Because of his recent injury history, Johnson to a degree has become a forgotten man. But if healthy, he’s an extremely versatile weapon (see 2016 when he rushed for 1,239 yards and 16 touchdowns and recorded 80 catches for 879 yards and four TDs).

If Johnson can stay healthy, Houston has quite an impactful tandem of Johnson backs (David and Duke).

Early in the game, they at times shared the backfield together, which gives Houston’s offense greater unpredictability.

On his scoring play, David Johnson certainly impressed. He showed great patience initially, waiting for things to open in front of him while making two defenders miss. Then he spotted his opening along the right edge and was off to the races. The play gave Houston a 7-0 lead with 4:54 left in the first quarter.

THERE’S your first score of the NFL season!

David Johnson dices through the defense to put the Texans up early!

Texans 0, Chiefs 0 — Looked for a second there as Patrick Mahomes was picking up right where he left off in Super Bowl LIV, as a 36-yard strike to Demarcus Robinson was poised to be the first score of the season – until officials ruled it an incompletion. Impressive sack by promising Texans pass rusher Jacob Martin against Chiefs standout right tackle Mitchell Schwartz to force third-and-long and the eventual punt.

The first series of the NFL season is a three-and-out by the Texans. OK, we’ll get to the fireworks eventually … we think.

The Texans returned to the locker room for both the national anthem and “Lift Ev’ry Voice and Sing,” while Chiefs DE Alex Okafor was the only Kansas City player to kneel during the anthem.

Pretty sure Andy Reid got his mask for this game from a local high school welding class #Chiefskingdom#Texanspic.twitter.com/SG9kjbLpGy

It should quickly become clear how different this game will be from a typical outing. Arrowhead Stadium will only have approximately 14,000 fans on hand, NBC reported prior to the game.

Chiefs player to watch: RB Clyde Edwards-Helaire. After incumbent starter Damien Williams opted out of the season, the 5-7, 207-pound first-round pick is trending toward being the Chiefs’ primary option out of the backfield, GM Brett Veach said. He might share carries with Darrel Williams tonight, but Edwards-Helaire should also figure prominently in the passing game, as he caught 55 passes last year for LSU.

Texans player to watch: WR Brandin Cooks. Sliding into the passing game along with Randall Cobb after DeAndre Hopkins was traded, Cooks is active despite being hampered by a quad injury. How effective can he be in helping Houston keep pace with Kansas City?