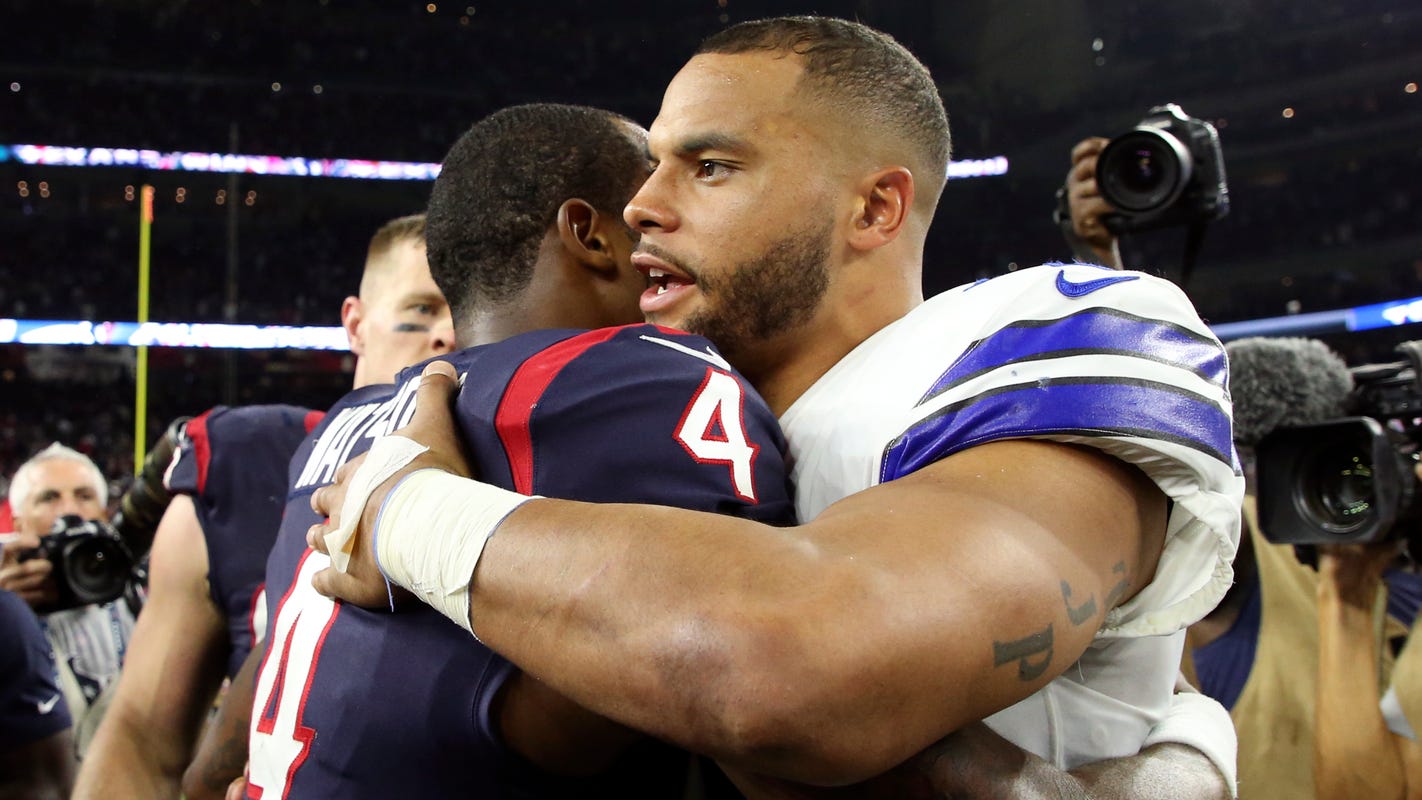 SportsPulse: Jori Epstein connected with Cowboys stars Dak Prescott and Ezekiel Elliott to get their perspective on Prescott’s long term status with the team.

He needs no hesitation before expressing his happiness for Texans quarterback Deshaun Watson, the latest NFL signal caller to cash in on a lucrative market.

But Prescott chooses his words carefully when addressing his own business as he enters his second consecutive season on an expiring deal.

“I believe — I’m not going to say I believe I’m always right,” the Cowboys quarterback told USA TODAY Sports Tuesday in a video interview. “But I have confidence in the way I go about things.

“I’m happy for Deshaun and all the rest of the guys.”

Sunday, Prescott will kick off the 2020 season playing out a $31.4 million franchise tender he signed in late June, weeks before he and the Cowboys failed to reach a long-term deal before the July 15 deadline. The Cowboys will compensate Prescott nearly as much this week as they did in all of 2019, when Prescott cost $2.1 million. During each of Prescott’s first three seasons — in which he started every game — his salary never hit $1 million.

Prescott’s raise this year is hefty. But he’s contractually guaranteed no money after 2020. He’s guaranteed no spot on the 2021 Cowboys roster.

Running back Ezekiel Elliott, who’s never played a game without Prescott, can’t imagine a Cowboys backfield without his draft classmate and close friend by his side.

“No way. No way,” Elliott told USA TODAY Sports on Tuesday as he and Prescott promoted their joint spot in Frito-Lay’s 2020 NFL Kickoff campaign commercial. “I don’t think there’s any possibility that that will happen. No, no. There’s no way that’s in the future.

UNDER PRESSURE: These nine NFL QBs have to step up this season

No quarterback in NFL history has played on his team’s franchise tag and subsequently signed a long-term deal to stay with the club that drafted him. Only two quarterbacks, Drew Brees and Kirk Cousins, have even played a season on the franchise tag since the league introduced the mechanism in 1993. Neither of their résumés at the time mirrored that of Prescott, who will start his 65th consecutive regular-season game on Sunday.

Even so, time is ticking. And market value appears to be rising.

Since the Cowboys and Prescott’s representation began negotiating in spring 2019, seven quarterbacks have signed deals averaging at least $32 million annually. Super Bowl-winning quarterbacks Russell Wilson and Ben Roethlisberger signed their extensions before the 2019 NFL draft. Prescott’s draft classmates Carson Wentz and Jared Goff cashed in that summer. The Vikings extended Kirk Cousins for $33 million per year in March. The Chiefs signed away their life rights to Patrick Mahomes on July 6, to the tune of a 10-year extension averaging $45 million a year.

Most recently, the Texans on Saturday awarded Watson a four-year extension that averages $39 million per year.

“There have been no surprises here,” Jones said Tuesday morning on Dallas radio station 105.3 The Fan. “No surprises in Mahomes and Watson. They just happen to be arguably two of the top players in the National Football League, prospective players and, however you want to define them, play the key positions. And, so, I would say that you see no surprise here at all.

“Everybody has to look at their own team, the makeup of their team, their salary cap situation. There’s no doubt that what others are paid comes to play. But I just think if you ask me was I surprised in any way with Mahomes and Watson, I would say not surprised.

“And I reiterate our thinking now, and in the future, is to have Dak as our quarterback.”

‘Here for the long haul together’

Executive vice president Stephen Jones said Monday that the Cowboys are “totally all in” on Prescott.

“We’d love to have it in the rearview mirror, but it’s not,” Stephen Jones told 105.3 The Fan about negotiations. “We’ll continue to address it and certainly feel very confident that we ultimately get something done.”

Prescott’s 2020 performance, no doubt, will factor into the cards at the 2021 negotiating table. Placing a second franchise tag on Prescott would guarantee him $37.7 million next season, all of which would count toward the salary cap in a year when pandemic windfall is expected to dent it. But Prescott has stated his belief that the market factors into his proposals for compensation and length. Since Stephen Jones said during 2019 training camp that “we’re damn sure not going to be a market setter” paying stars, the Cowboys reset the running back market with Elliott’s six-year, $90 million deal and then signed Cooper to a five-year extension worth up to $100 million — the richest max value ever for a receiver.

The Joneses point to those contracts as a positive for Prescott: The better his weapons, the better the team’s chance to contend. They tout Texas’ lack of state income tax and the Cowboys’ marketability as income boosts not subject to NFL salary cap restrictions. Frito-Lay’s season kickoff campaign marked Prescott and Elliott’s first joint commercial, but Prescott has starred in dozens since 2016.

“Me and Zeke have talked about being in a commercial (together) since our rookie year, so to finally get that in action and shoot it together and show our personalities was fun,” Prescott said. “Hopefully we can do many more with Tostitos.”

Taking care of business on the field and in free agency will improve the chances of further joint marketing. Prescott echoes Elliott’s sentiment that neither can imagine a 2021 Cowboys offense without its two hallmark pieces for the last half-decade.

“I mean, it calls just for a great tandem,” Prescott told USA TODAY Sports. “As he said, I can’t imagine me not in that backfield with him. I feel the same way. So yeah, I mean, we’re here.

“We’re here for the long haul together.”