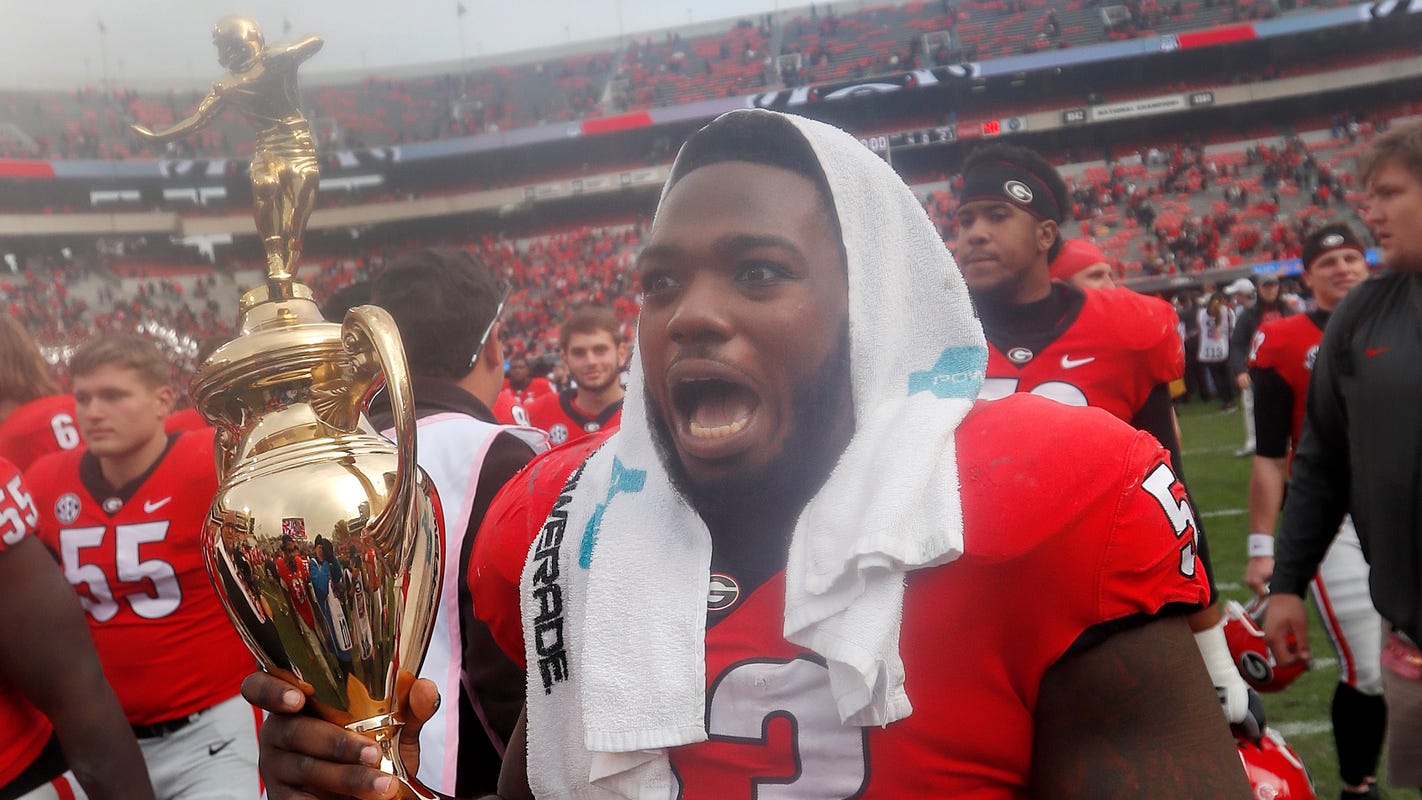 Ten things to watch this season

The 2020 college football season is going to take some getting used to. There are fewer teams and fewer games and fewer opportunities to enjoy the sport.

On the bright side, these changes are not permanent.

Should health conditions improve, next year’s season will look much more like 2019 than what we hopefully will see in the next three months. Fans and bands will eventually return. Game days will feel normal again. The experience of watching on television will be what we remember.

Even with that optimism for 2021, there are some changes for this season in the COVID-19 era that will require an adjustment from what is seen as normal.

Here’s 10 things that will look different:

The debate on the four teams that will play for the national championship will shift from which conference champion is left out to which conference gets two teams. Such is the situation with the Big Ten and Pac-12 not part of the conversation.

It’s hard to imagine that second team won’t come from the SEC given the league’s strength of schedule with all 10 games against league opponents. The challenge for contenders is to avoid pitfalls that could open the door for the ACC or Big 12 to have its second team make the field. There will be controversy. There always is. What happens if an unbeaten Oklahoma or Clemson loses in the conference title game? Could that knock out the runner-up in the SEC?

The other playoff question involves whether the Group of Five can legitimately be part of the conversation. The American Athletic should have several teams high in the committee rankings. If an unbeaten champion were ever to have a strong claim, this would be the season.

The anticipated competition between quarterbacks Justin Fields of Ohio State and Trevor Lawrence of Clemson for college football’s top individual honor was shaping up to be one of the great races in recent history. Half of that equation is gone as Fields won’t suit up this season.

Lawrence now stands as the clear-cut leader to be holding the Heisman in December. While there’s advantages to being the runaway favorite, there is also scrutiny. Expectations will be unrealistically high and every mistake will be magnified. A great season can appear normal when you are under that kind of microscope.

Should Lawrence falter, the door is open to Big 12 standouts Sam Ehlinger (Texas QB) and Chuba Hubbard (Oklahoma State RB) or new Oklahoma quarterback Spencer Rattler. In the SEC, there will be someone that emerges. A surprise winner is not as unlikely as it seems. LSU quarterback Joe Burrow was an afterthought last year and ended up with the hardware.

No Ohio State-Michigan. No Southern California-UCLA. The Oregon Civil War is also on hiatus. Wisconsin and Minnesota won’t play for Paul Bunyan’s Axe, ending the longest uninterrupted college football series, dating to 1891. The Apple Cup and Floyd of Rosedale are out, too.

And those are just notable rivalries in the conferences not playing.

They should be back next year. It’s going to be strange without them.

The Magnolia State won the coaching lottery this offseason with Mike Leach moving to Mississippi State and Lane Kiffin returning to the SEC at Mississippi. How Leach’s passing offense does in the SEC will be one of the great chess matches to watch. The uncertainty surrounding Kiffin involves how much he has matured since his one rocky season leading Tennessee. He seems comfortable in his first nine months in Oxford. But there’s still some mischievousness lurking beneath the surface that will surely bubble to the top.

The new coach to watch closely is Mike Norvell. Florida State has endured mediocre results for three seasons. Roster mismanagement under Jimbo Fisher and a frustrating two years with Willie Taggart have left the Seminoles as an afterthought in the ACC race. Norvell took Memphis to new heights, but the pressure will be on him to produce instant results for a program that has high expectations and seems miles behind Clemson.

Other notable debuts worth watching include Dave Aranda at Baylor, Eliah Drinkwitz at Missouri, Jeff Hafley at Boston College and Jeff Scott at South Florida.

There were supposed to be more than 40 bowl games, but the reduction to 76 playing teams means significantly fewer games with some cancellations and adjustments necessary.

The Citrus Bowl, Outback Bowl and Alamo Bowl lost one of its conference partners. The Holiday Bowl lost both. How will they recalibrate?

The NCAA is still sorting out bowl eligibility given reduced schedules and mostly conference schedules. Getting to five wins could be a problem for teams in the Power Five, especially in the SEC where teams pad schedules with easy non-conference games and usually only need to get two or three league wins to reach the postseason. That won’t be the case this season.

When stars walk out the door to the NFL, it leaves an opening for incoming freshmen to immediately make their mark. This year will be no exception.

Bryce Young will push Mac Jones for the Alabama quarterback job. Expect him to be on the field at some point and flash the talent that made him a five-star recruit.

Clemson had one of the school’s best recruiting classes. Defensive linemen Bryan Bresee and Myles Murphy are two of the elite prospects of the group with Bresee already listed as a starter on the team’s depth chart.

At Texas, running back Bijan Robinson is currently third-string, but don’t expect that to last too long. His speed will be hard to keep off the field as the Longhorns try to get more explosive with their offense.

You might scratch your head when someone is wearing the number 0 for the first time. Yes, that’s legal. It is one of the new rules approved by the NCAA to keep an eye on.

Among the others, players ejected for targeting will be allowed to remain in the bench area for the remainder of the game. Those ejected in the second half and subsequently suspended for the first half of the next game can be on the sideline at the start of that contest.

The elongated instant replay reviews should be significantly cut down. There’s a two-minute time limit for delays unless the call is deemed “exceptionally complicated” or involves an end-of game situation.

More scrutiny will be given to pregame activities. Referees will be in charge of the field 90 minutes before the game instead of 60. Players also will have to wear numbers during warm-ups. This is an attempt to avoid issues between the teams and more easily identify those that are behaving inappropriately.

Traditions are what separate college football from other American sports. But without tailgating, bands and the other unique aspects of the game experience, fans lucky enough to be in stands or those watching on television will need to be open-minded and appreciate what they have, rather than complain about what is missing.

Given the season looked to be on the edge of collapse last month, it’s fairly remarkable the first big weekend is almost here. A lot of time and money have gone into getting teams on the field. It’s been stressful for everyone. Having games is going to be a relief and should be appreciated even if they’re not what we’re used to seeing.

Stability on the sideline

As colleague Dan Wolken wrote last week. the state of finances in college sports has put athletic departments in no position to fire coaches for performance. Eight-figure buyouts are not feasible. Even high seven-figure ones aren’t likely.

There’s also a tacit acknowledgement that coaches have been limited in their ability to fix problems without the benefit of spring practice and a shortened preseason. It means Texas and Southern California are probably going to respectively give Tom Herman and Clay Helton a mulligan this season if things go poorly.

With so much uncertainty and such an uneven playing field given different health restrictions in states, administrators will understand the difficulty of making changes even if fans don’t.

There’s already been several stars opt out of the season. LSU lost four starters. Oklahoma is without its top returning running back. Georgia has to readjust after its projected quarterback decided to walk away. There could be even more during the season.

It’s the sad reality of the pandemic. Embrace the frustration and hope it doesn’t happen to your team.