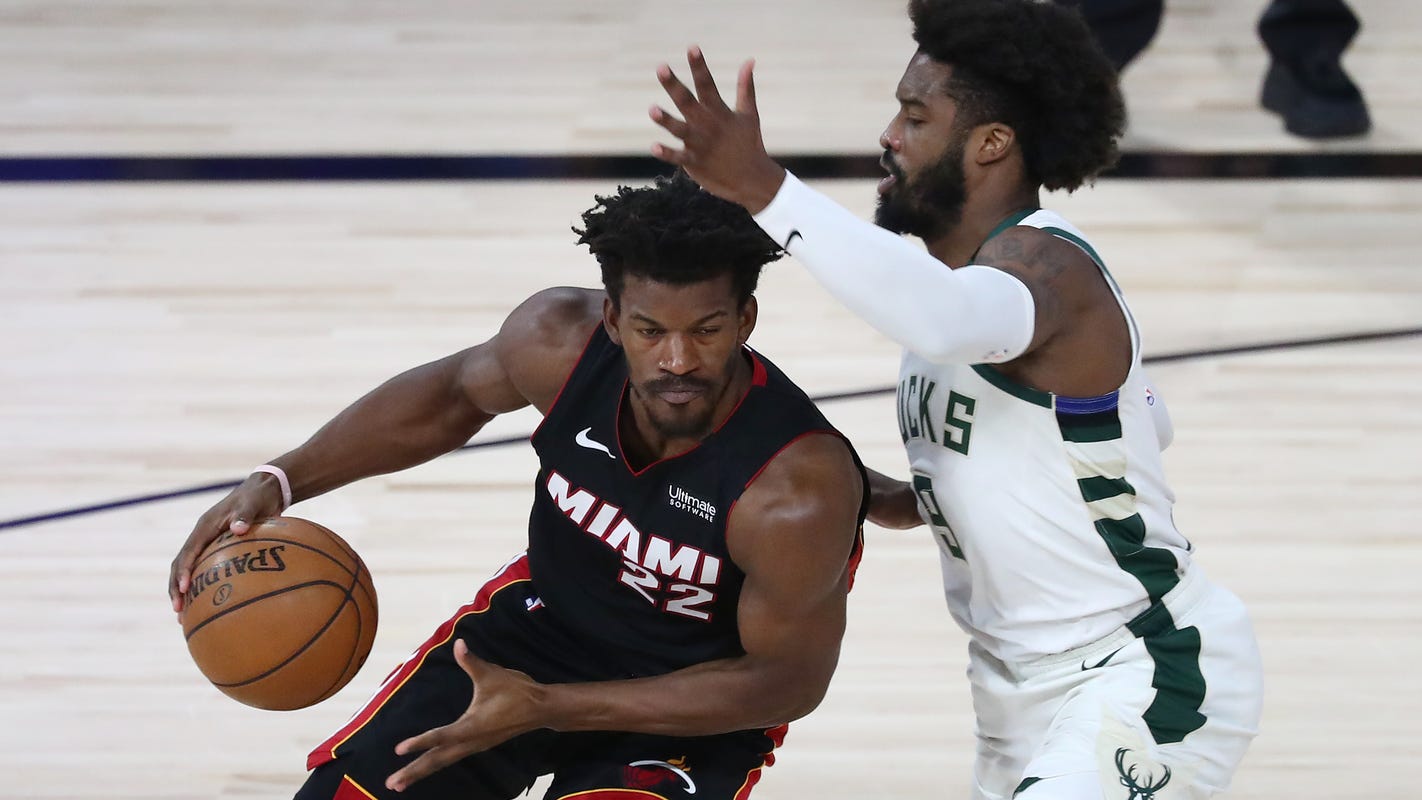 LAKE BUENA VISTA, Fla. – Not much went right for the Milwaukee Bucks in the Eastern Conference semifinals series against the Miami Heat.

Their offense wasn’t sharp against a strong defense, their defense wasn’t there against a solid 3-point shooting team, and MVP Giannis Antetokounmpo’s offensive struggles were exacerbated by a sprained right ankle that forced him to miss basically the final three quarters of Game 4 and all of Game 5.

The Heat eliminated the Bucks with a 103-94 victory in Game 5 on Tuesday, a gentleman’s sweep that is as surprising as it is disappointing for Milwaukee, which had championship aspirations.

“The most important thing is we have to be who we are,” Heat coach Erik Spoelstra said before the game. “With Giannis or without him, both teams have a pretty good idea of how they want to play. It’s who can impose their identity for longer stretches and periods of the game. That’s what we’re focusing on coming into tonight.”

Clinging to their playoff lives, the Bucks delivered an admirable effort but just didn’t have enough without their MVP to overcome a balanced Heat team.

Khris Middleton had 23 points, seven rebounds and six assists for the Bucks, and Donte DiVincenzo, starting in place of Antetokounmpo, had 17 points.

Miami advances to the conference finals for the first time since 2014 when LeBron James, Dwyane Wade and Chris Bosh were with the team. The Heat will play the winner of the Boston-Toronto series, which the Celtics lead 3-2.

Since 1984, the five seed has beaten the one seed four times, and this is the first time it has happened since 2013.

Milwaukee dominated during the regular season, especially before the NBA suspended the season on March 11 due to COVID-19, and finished with the league’s best record.

But the bubble was not kind to the Bucks. They were 3-5 in seeding games, lost Game 1 to Orlando in the first round and fell into a 3-0 hole in the second round against Miami.

Antetokounmpo, who is the 2019-20 MVP and likely to win his second MVP award soon, wasn’t sharp offensively. He averaged 21.8 points, 11 assists and five assists in four games against Miami, shooting 50.8% from the field and 21.45 on 3-pointers. And through three games, he was shooting just 45.1% from the field, way below his regular season average of 55.3%.

Beyond the difficult of life in the bubble, the Bucks were hit particularly hard by the police shooting of Jacob Blake, a Black man, in Kenosha, Wisconsin, just 40 miles south of Milwaukee.

After Game 4 of the Orlando series and after the Blake shooting, Bucks guard George Hill said, “We shouldn’t have come to this damn place to be honest.”

Then, the Bucks declined to play Game 5 on Aug. 26, putting the remainder of the NBA’s restart in jeopardy. The league took a few days off as players decided to resume play.

For a combination of reasons, the Bucks never were the same team in the restart. Their momentum in March didn’t carry over through a 4½-month layoff, and their season is over sooner than expected.