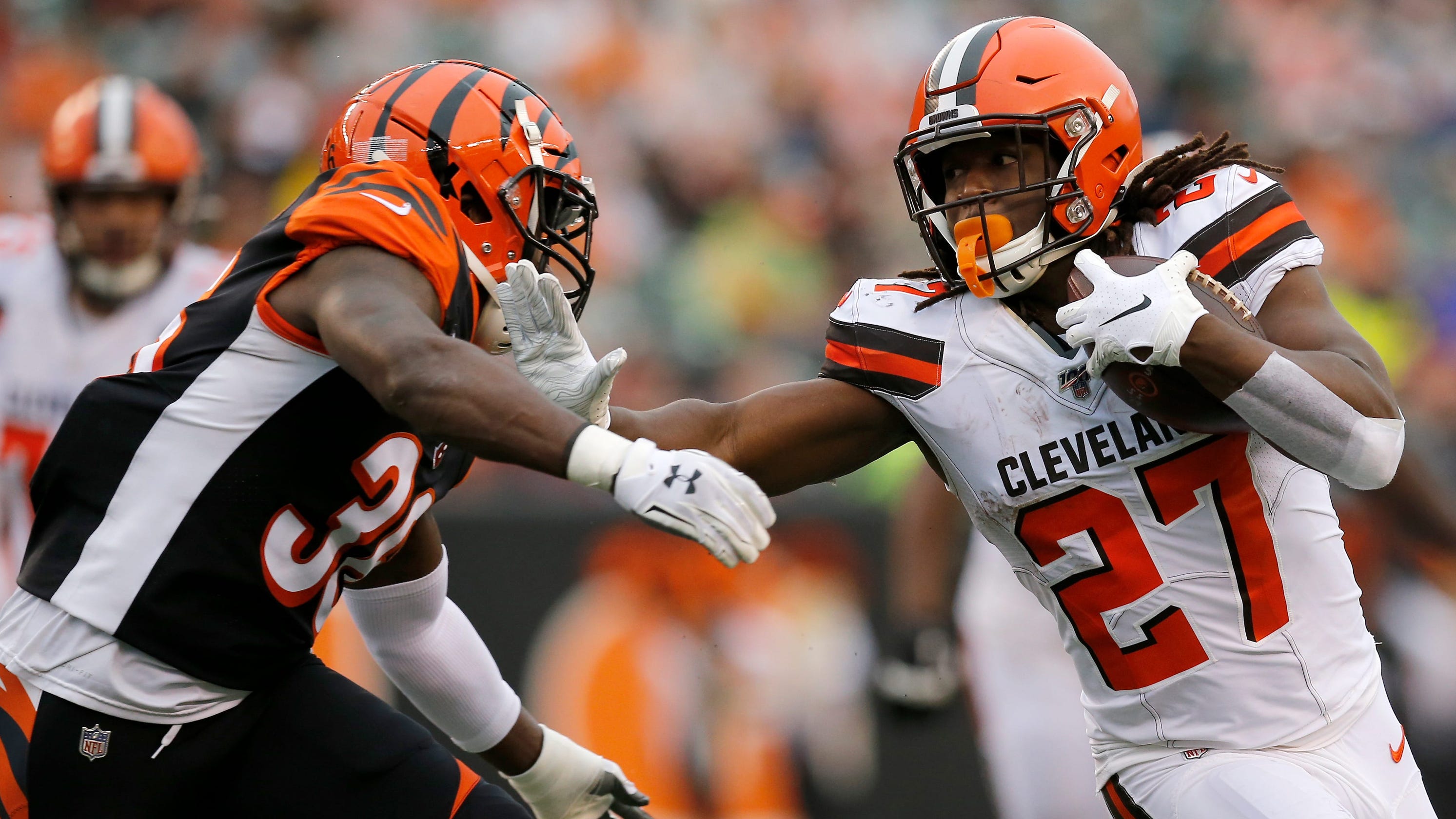 The Cleveland Browns and Kareem Hunt reached an agreement Tuesday on a two-year, $13.25 million contract extension, tying the running back to his hometown NFL team for the next three seasons.

Two people familiar with the deal confirmed it to the USA TODAY Network after NFL Network first reported it. The people, speaking on condition of anonymity because they were not authorized to disclose the financial terms of the pact, said the extension includes $8.5 million guaranteed.

Hunt had been scheduled to become an unrestricted free agent next year, but now he’ll be under contract with the Browns through the 2022 season.

Browns starting running back Nick Chubb is under contract through the 2021 season and will be eligible to sign an extension next year. The 2018 second-round draft pick from the University of Georgia is positioned to receive a blockbuster payday, whether it’s from the Browns or another team, after finishing last season second in the league with 1,494 rushing yards and becoming a Pro Bowl starter.

For now, it’s Hunt who’s enjoying a new financial commitment from the Browns.

“Cleveland has always been home to me, and putting on the Orange & Brown has been THE dream growing up,” Hunt wrote in a statement posted on Instagram. “Being able to make it official, and play my heart out for the city I love for the next few years is a blessing.

“Today, I’m honored to sign this extension with the Cleveland Browns, and play next to my Dawg brothers for years to come.

“Thank you to [owners Jimmy and Dee] Haslam, [General Manager] Andrew Berry, Coach [Kevin] Stefanski and the entire Browns’ organization for continuing to believe in me through the process, and as an integral part in the offensive scheme.

“To everyone who has also supported me — my family, mentors, friends, and off-the-field team — thank you for continuing to be my ‘why.’ All and continued thanks to God the Good Lord for the guidance, strength, blessings and opportunity to be in this position.

“And, of course, a BIG thank you to the entire DAWG POUND for welcoming me back home. I promise to continue to push and work hard to bring a championship here for you all, representing the best team in the NFL, and make a lasting impact in the community and on the field.

UNDER PRESSURE: These nine NFL QBs have to step up in 2020 season

Although Hunt’s new deal can be viewed as a low-risk extension for the Browns, it’s noteworthy Berry and the new regime chose to do it despite the player’s off-field history.

In 2017, the Kansas City Chiefs drafted Hunt in the third round out of the University of Toledo. He immediately became a star, leading the NFL in rushing yards (1,327) and making the Pro Bowl as a rookie

But the Chiefs cut Hunt in the midst of his second NFL season on Nov. 30, 2018, after TMZ.com released a surveillance video showing him shoving and kicking a woman in February 2018 in the Metropolitan at The 9 in downtown Cleveland.

Still, the Browns gave Hunt another chance by signing him on Feb. 11, 2019. At the time, John Dorsey was their GM, a role he also held with the Chiefs when they drafted Hunt.

The incident at The 9 and another physical altercation Hunt had with a man in Put-in-Bay in June 2018 led the NFL to suspend the running back for the first eight games of the 2019 season under its personal-conduct policy.

In the final eight games last season, Hunt formed a dynamic duo with Chubb and had 43 carries for 179 yards (4.2 average) and two touchdowns and 37 catches for 285 yards and one TD.

Berry replaced Dorsey in January, yet the Browns still stuck with Hunt after his involvement in another off-field incident the same month.

Rocky River police found less than a gram of marijuana in a car Hunt had been driving on Jan. 21, when an officer pulled him over for speeding on Interstate 90. In a dash cam video of the traffic stop, Hunt told Patrolman Mike Asbury he would have failed a drug test if he were subjected to one.

Although Hunt was not charged with marijuana possession, Jimmy Haslam, Stefanski and Berry made sure Hunt knew he must stay out of trouble to remain on the team.

In June, Hunt told Browns beat writers the team’s decision to keep him after the traffic stop was a blessing.

“I’m lucky to have another opportunity to play football,” he said. “You never know [if an incident like that could end a career]. Honestly, I’m just blessed to play the game, so I’ll always feel lucky to play football. So I know any second it can be gone.”