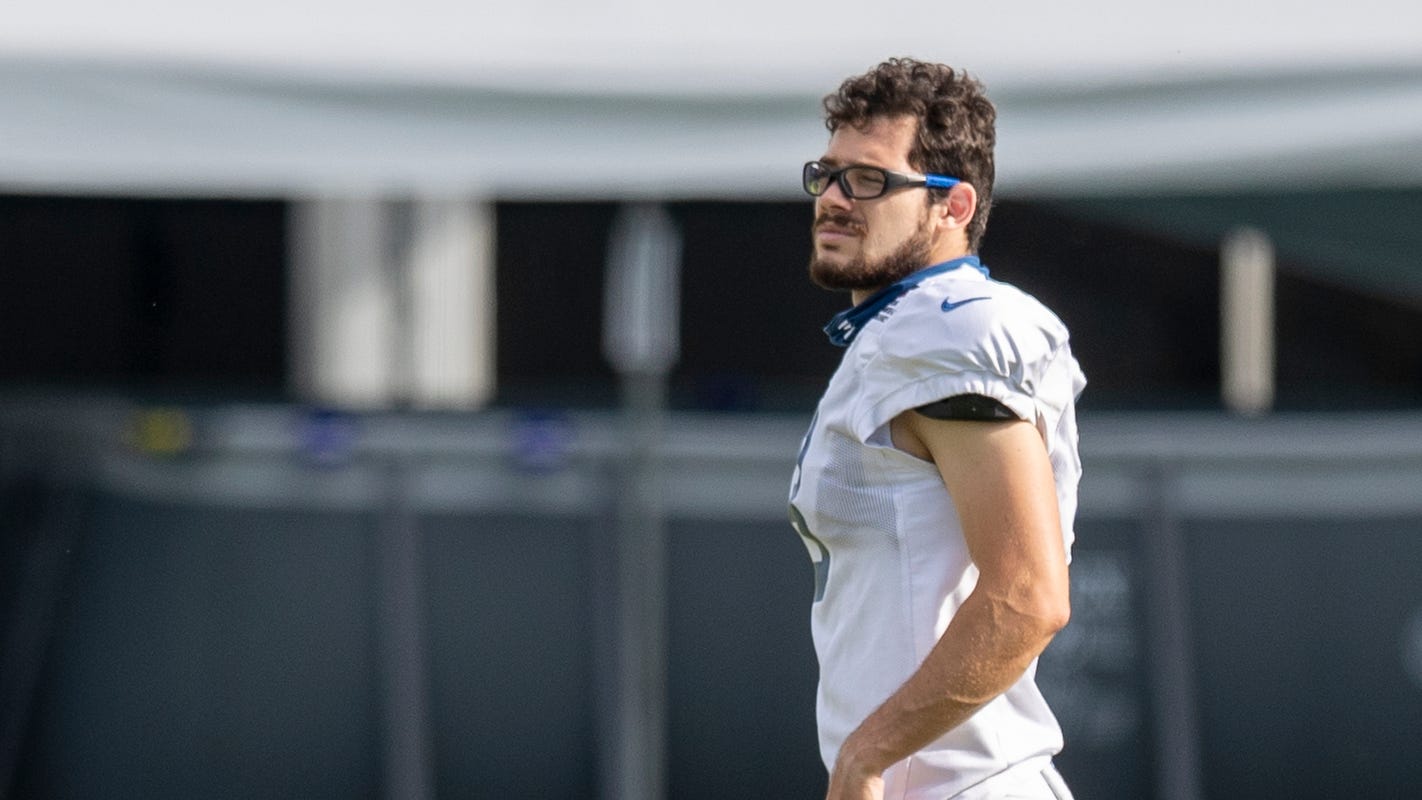 INDIANAPOLIS – If rookie Rodrigo Blankenship can kick even a little bit, it’ll be a bonus. Pretty sure he can kick a lot, and while that’s beside the point, we’ll find out soon enough. After a training camp in seclusion, with no preseason games, the Indianapolis Colts open the 2020 NFL season Sunday at Jacksonville with Blankenship at kicker.

You need to know that, because you’ll be buying Blankenship’s jersey. And that’s before we find out how much he can kick. Given that he was a record-setting All-American at Georgia, a clutch kicker with Vinatieri in his veins, with a leg so strong that his high school nickname was “Legatron,” we’ll probably find out he can kick a ton. He’d better, to have beaten out Chase McLaughlin, last year’s midseason replacement for Adam Vinatieri, a guy we’ll see kicking in the NFL for the next decade.

But the charm with Blankenship, the reason you’re going to love him, isn’t his kicking ability. At Georgia, where he kicked the daylights out of it, they loved him for those thick black hipster glasses he calls goggles, and for that thin brown facial hair he calls a beard.

At Georgia they loved the pink cleats he wore into visiting SEC stadiums, and the scooter he rode to class. They loved the earnest way he dedicated himself to every single thing he did, whether it was kicking (he was 200-for-200 on extra points, and set a Georgia record with an 82.5% field goal accuracy) or academics (graduated in 3½ years with a 3.71 GPA) or community service (nominated in 2019 for the Wuerffel Trophy, college football’s premier award for community service).

And they loved the way he talked to reporters, like the time he forgot to take his helmet off after beating Kentucky with a last-second kick as a freshman in 2016, kicking up a social media storm that went viral, causing the Twitter hashtag #HotRodForPres2K16 to trend nationally. Or the time he tried to downplay his popularity by saying, “I think everyone loves a good nerd.” Or the time he said: “I’m pretty weird in general.”

Let’s hope he can kick a little bit.

“Bit of an awkward personality”

First of all, he’s intense. And earnest. Before leading the team onto the field for Senior Day at Georgia by running through one of those paper banners, Blankenship asked teammates who’d done it for advice.

At Colts practice, when special-teamers spend most of the time watching the rest of the team do drills, Blankenship isn’t fooling around. I went to two practices during training camp and couldn’t take my eyes off the little guy, for starters because of the way he walks. Surely he has elbows and knees, but nothing bends when he walks, giving the appearance of a cocky little strut, which is hilarious. Nothing cocky about this guy.

A walk-on from Marietta, Ga., Blankenship received his scholarship at Georgia during his redshirt sophomore season. Coach Kirby Smart told him the good news before the Notre Dame game, a 20-19 Georgia victory with Blankenship providing the winning points on a 30-yard field goal with 3½ minutes left. In the locker room afterward, when Smart is mentioning Blankenship’s kick, the Georgia coach asks the kicker if he wants to share his good news.

All eyes are on Blankenship, who’s smiling uncomfortably. He’s looking down and saying three words — “I’m on scholarship” — as the team erupts in happy noise. They start chanting a single word, over and over, and after watching the video 10 times, I’m telling you, this is the word I hear being chanted:

This is how Ryne Dennis, the sports editor of the paper in Athens, Ga., described Blankenship on the Bulldogs’ Senior Day in 2019, a 19-13 victory against Texas A&M when Blankenship made four field goals:

“The Marietta native’s diminutive demeanor,” Dennis wrote on Nov. 23, “and a little bit of an awkward personality have endeared him to Bulldog nation …”

A little bit of an awkward personality? I don’t want to buy his No. 3 jersey. I want to hug him! But there could be a line around here, once everyone gets to know the Colts’ new kicker. At Georgia, which you may realize is something of a football factory that produces a handful of NFL players every year, only one senior can be the last player introduced before kickoff.

Blankenship was that player. The kicker. At Georgia!

“It’s an unusual sight,” Dennis wrote in 2019, “to see a fanbase so enamored with a kicker, but Blankenship in his shy and unassuming ways has captured the hearts of Georgia fans.”

Shy and unassuming … that’ll play around here. Especially if he can kick a little bit.

Of course he can kick a little bit. You don’t think I’m questioning that, do you?

His track record is brilliant dating to college, and to high school, where he was an all-state punter and an All-American kicker, and even to middle school, when he was credited with being the first sixth-grader in state history to make a field goal. Sixth-grade teams don’t kick much, as you know. But they do, when Blankenship is their kicker. He worked out so hard, kicked it so often, that his high school coach once begged Blankenship’s dad to stop pushing the kid so hard.

“I’m worried you’re going to let your son kick his leg right off his body,” Billy Shackelford told Saturday Down South before the 2018 College Football National Championship Game between Georgia and Alabama.

Kicker Roberto Blankenship during Colts training camp from their facility in Indianapolis, Monday, Aug. 17, 2020. The event is being held without fans due to restrictions around the coronavirus. (Photo: Robert Scheer/The Indianapolis Star)

“Coach,” Dan Blankenship told Shackelford, “I wish you’d tell him that. He’s the one who wants to do it.”

Remember those 2018 College Football Playoffs? That was the one with the Rose Bowl semifinal where Georgia found itself trailing Oklahoma 31-14 until Blankenship blasted a 55-yard field goal at the halftime horn to start the Bulldogs’ comeback. In the championship game Blankenship drilled a 51-yarder on the first possession of overtime, but Alabama scored a touchdown to win it 26-23.

Blankenship is just as intense now, by the way, using down time at practice — and for kickers, there’s nothing but down time — to kick balls into the net or to use his three-pronged tee to practice no-step form field goals. As I wrote a few days ago, Blankenship refused to watch McLaughlin kick, instead clasping his hands behind his back and looking at his feet.

Those feet wore pink cleats in college. It wasn’t a fashion statement, but a necessity. See, Blankenship prefers cleats Nike doesn’t make anymore. They’re soccer cleats, a model Nike made for the 2010 World Cup and discontinued years ago. Something about the sheath of leather that covers the laces. Kickers …

Anyway, Blankenship likes the shoe so much, he scours online sites for old pairs — size 11 — and went into his senior season at Georgia with two. They were pink.

You’d think, now that Blankenship has made an NFL roster — and the Colts wear Nike gear — he can get a pair made in Colts blue. We’ll see, won’t we? One more thing for us to notice about the kicker, when the season starts Sunday.

We’re going to notice a lot about Rodrigo Blankenship. Good luck taking your eyes off him.