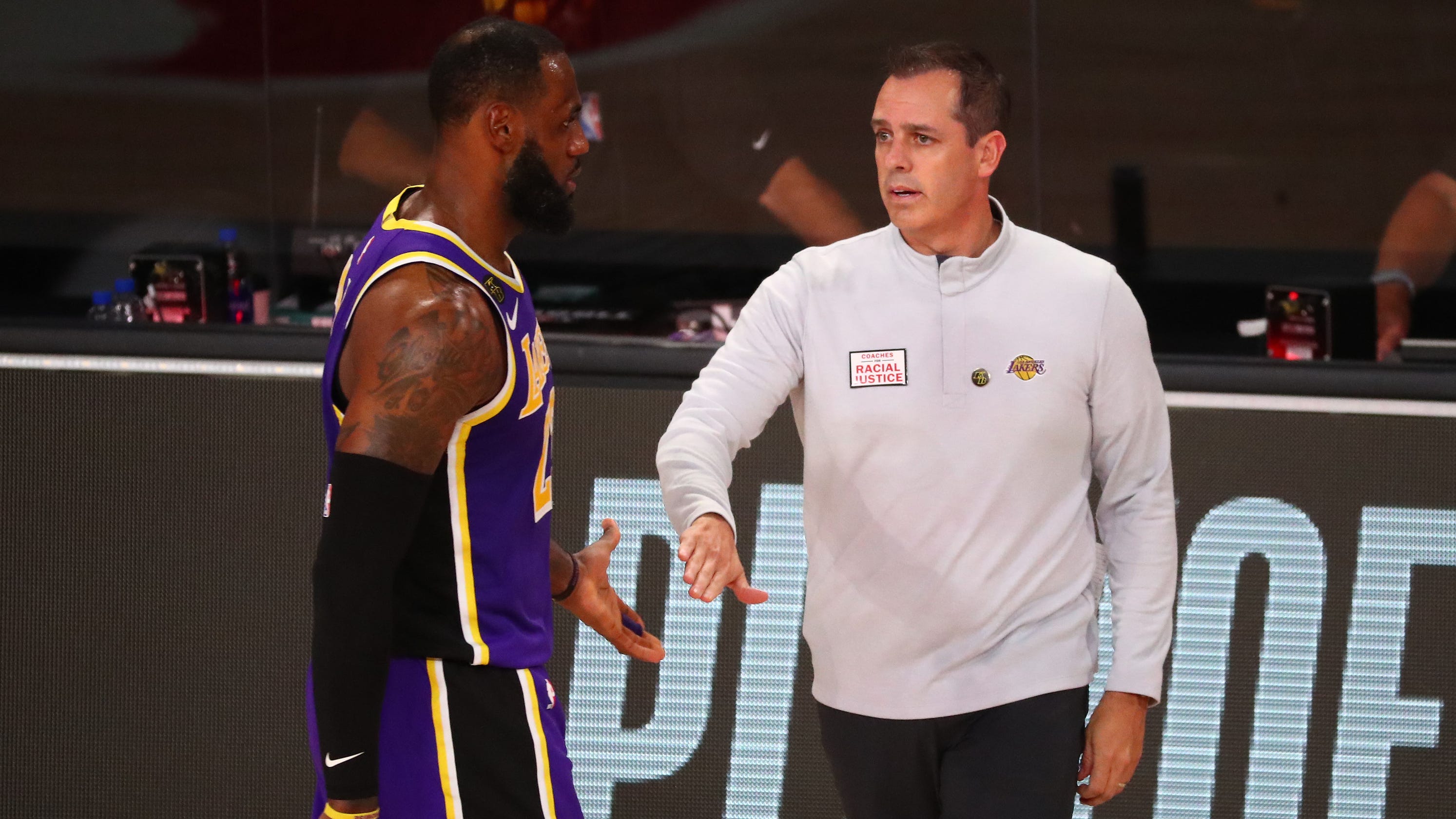 Frank Vogel ran in to Giannis after calling LeBron the MVP

Moments after detailing James’ consistent production and leadership on and off the court to reporters, Vogel soon experienced anxiety as he left a practice facility on the NBA’s Disney campus. Vogel walked past Milwaukee Bucks star Giannis Antetokounmpo, another MVP candidate.

“I didn’t talk to him. I just walked past him,” Vogel said. “I had just told the world that Lebron is the MVP, so that was weird. The NBA can be awkward.”

Especially when most of the NBA world has spent the past two months in the same location amid safety concerns about the coronavirus pandemic. When they are not playing games at ESPN’s Wide World of Sports Complex, NBA teams have split practice times at those facilities and at a convention center around Coronado Springs.

NO LAME DUCK: Rockets should make D’Antoni part of future

Once the NBA restarted its season in July, the league’s top contending teams stayed at the Grand Destino Tower. The middle seeds lodged at the Grand Floridian. The playoff bubble teams resided at the Yacht Club.

Teams have since left the NBA campus following the seeding games and the first round of the playoffs. Still, the Grand Destino Tower has remained occupied, leading to interactions that would rarely happen during a traditional NBA season since teams all travel and lodge privately.

“Jimmy Butler asked me if I wanted to buy a cup of coffee from him the other day,” Vogel said of the Heat star’s apparent new coffee business. “I told him I would, but I didn’t follow through yet.”

How often do these random interactions happen?

“It’s every minute of every day; every single day,” Boston Celtics coach Brad Stevens said. “We all run into each other a lot.”

When Stevens has taken what he calls his “walk of sanity” around the campus, he has often run into Toronto Raptors coach Nick Nurse and Denver Nuggets coach Mike Malone when they have taken what Malone calls his “sanity bike ride.”

“I’ve enjoyed it in a weird kind of way,” Malone said. “Brad Stevens and I have had more conversations in the last 60 days than we’ve ever had because we’re down here and we’re in the same boat. It’s unique and we’re trying to make the best of it.”

Frank Vogel, LeBron James and the Lakers have been in the NBA bubble for about two months now. (Photo: Kim Klement, USA TODAY Sports)

Malone has gone to the campus barbershop to get a haircut, only to run into Raptors executive vice president Masai Ujiri and Clippers coach Doc Rivers. Malone and Rivers had their haircuts before Game 5 of the Nuggets-Jazz first-round series. Then, Malone said that Rivers “guaranteed we were going to win that game.” That might be good Rivers said those words then because Malone often ran into Jazz coach Quin Snyder at the Grand Floridian.

During that time, the Nuggets and Jazz crossed paths frequently. They had overlapping practice times at the same place. They held team meetings directly across from each other at the Grand Destino Tower. Malone described the dynamic as “strange and weird,” but that did not spark tension. Instead it cemented bonds.

After the Nuggets won a decisive Game 7 and overcame a 3-1 deficit, Utah guard Donovan Mitchell and Denver guard Jamal Murray embraced on the court. They had already been friends after both landed endorsement deals with Adidas. So when Lakers guard Danny Green took a late-night stroll around campus following that game, he was not surprised to see Murray and Mitchell “talking a lot.”

“I think they embraced that,” Green said. “They were talking about it and were wishing each other luck in the future.”

“When the game is on, we’re playing against each other. But off the court we are friends,” Jokic said. “We can have dinner, breakfast, lunch or whatever. But it’s a job. We both want to win.”

Therefore, not everyone has embraced the close proximity.

Since playing two games of their second-round series, the Clippers and Nuggets have frequently crossed paths when they step on their team bus and at the hotel elevators. During one of the times in the elevator, Rivers said aloud, “I don’t know if that’s even healthy. If there’s a contentious game, I don’t know if I need to see this.” So far, no on-court fireworks and no off-court fights. So when Rivers conducted a post-practice interview at the campus’ convention center, Jokic walked down the hallway and simply made faces at him.

That might explain why Rockets coach Mike D’Antoni jokingly maintained he took the hotel stairs instead of the elevator when his team played the Oklahoma City Thunder in the first round. Hence D’Antoni’s elation that their playoff advancement has ensured the Rockets are the sole remaining team at the Grand Floridian.

Still, D’Antoni missed having frequent chats with Magic coach Steve Clifford, who worked as an assistant for one of his two seasons with the Los Angeles Lakers (2012-13).

“I enjoyed it. But then they started leaving, so it’s different,” D’Antoni said. “Now, I have to actually talk to my guys.”

Nonetheless, the forced conversations, the organic ones and the awkward silences will continue during daily walks, haircuts and transportation routes.

“We have a great deal of respect for everybody that’s been here,” Stevens said. “Everybody has put in a lot of time here.”