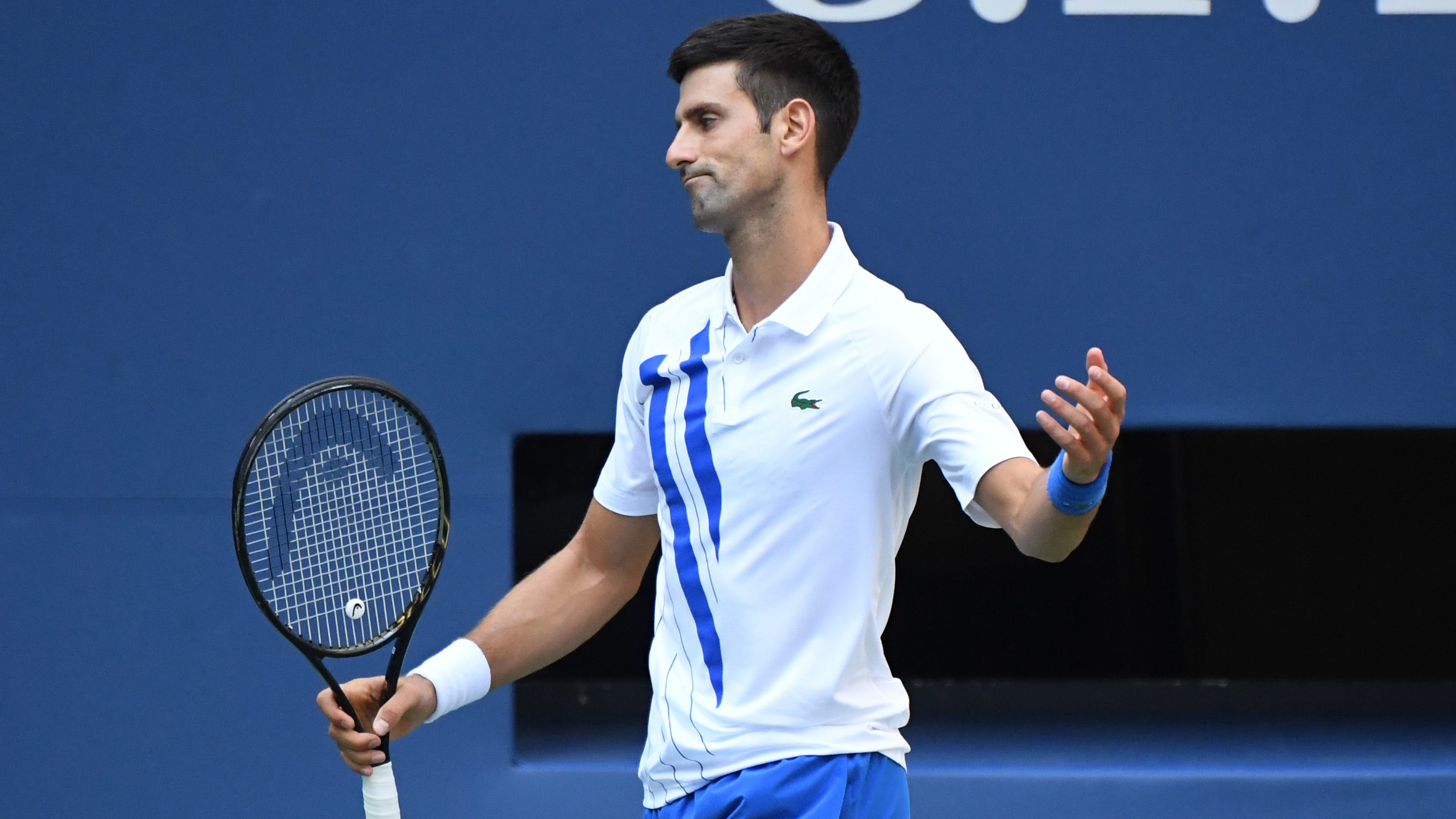 Novak Djokovic can blame only himself for U.S. Open disqualification


The saddest part of Novak Djokovic’s domination over tennis the last six years is that even claiming the title of greatest to ever play the game was never really going to be enough.

Maybe in the end all the records would have been his revenge. But as he conquered Roger Federer and then Rafael Nadal, Djokovic found that the global affection for those two legends could not be split three ways. Some of it might have been his fault, but much of it wasn’t. He simply came along third.

But what comes next in Djokovic’s legacy is undeniably his fault. After Sunday’s disqualification from the U.S. Open to cap off a 2020 season that has battered his image, Djokovic’s desire to one day have both the trophies and the love he craves is ultimately going to be unfulfilled. He may end up winning more than anyone, but he’s going to go down in history as one of its biggest brats.

Let’s get this out of the way. There’s absolutely no controversy about Djokovic getting defaulted out of the tournament Sunday after angrily smacking a ball that ended up striking a linesperson directly in the throat. Though the ball’s destination was inadvertent, the act itself was clearly born out of Djokovic’s mounting frustration during his Round of 16 match against Pablo Carreno Busta.

From the moment the linesperson went down, the decision was straightforward. As the U.S. Tennis Association explained, “intentionally hitting a ball dangerously or recklessly within the court or hitting a ball with negligent disregard of the consequences” is right there in the rulebook. There was really no other choice.

Historically speaking, it’s a moment of boneheadedness that will ripple across the sport. Djokovic was a heavy favorite to secure his 18th major title in this tournament, which would have drawn him within two of Federer’s 20.

Instead, with Federer injured and Nadal deciding not to travel to the U.S. so he could prepare for the French Open, tennis is assured of having a first-time Grand Slam champion. That hasn’t happened since 2014 when Marin Cilic won the U.S. Open. Outside of the Big Three, in fact, just four men since 2006 have won Grand Slams.

TIAFOE: COVID-19 could not stop last U.S. men’s player from reaching Round of 16

SERENA: Three reasons why she will win the U.S. Open for her 24th Grand Slam

But more importantly for Djokovic, having the most infamous disqualification in the history of a major tournament hanging around his neck is the kind of thing that will resonate long after he’s done playing.

Djokovic certainly has his fans, but the larger tennis world has always seen him as something of a villain, often for on-court behavior and body language that has pushed the rules. When it became clear the crowds preferred Federer and Nadal — sometimes in ways that have been borderline disrespectful — Djokovic had no choice but to embrace the role and used it to fuel his rise to the top.

What’s unfortunate is that when you give Djokovic a deeper look beyond the tennis court, he seems like a fundamentally good person. He overcame a lot as a child growing up in war-torn Serbia to get where he is, and he does a lot of charity work around the world through his foundation. He is consistently engaging and interesting in interviews and does not avoid sensitive topics. If you look at the whole package, there aren’t many obvious reasons to dislike him.

But every time you want Djokovic to become a statesman, to earn the admiration he should be getting later in his career, he reverts to acting like a spoiled child. He just doesn’t get it.

Earlier this year, while tennis was paused, Djokovic frequently did Instagram Live sessions with wellness gurus peddling junk science like positive thinking can change the molecular structure of water. In another, he made questionable comments about vaccines.

Then he tried to launch a series of exhibition matches in Europe, putting on events that had absolutely no social distancing rules either in the crowds or among the competitors. Djokovic brought the players to a nightclub in Belgrade and played pick-up basketball, making a mockery of the dangers of the virus.

When several people involved in the tour ended up getting COVID-19 including Djokovic, his wife and a few other players, the reaction around the world was harsh. But in an August interview with the New York Times, he didn’t exactly seem all that contrite or introspective about what an awful look that was.

“I don’t think I’ve done anything bad to be honest,” he said. “I do feel sorry for people that were infected. Do I feel guilty for anybody that was infected from that point onward in Serbia, Croatia and the region? Of course not. It’s like a witch hunt, to be honest. How can you blame one individual for everything?”

Djokovic didn’t seen any more eager to accept responsibility for Sunday’s meltdown. Though he later posted an apology on Instagram and seemed to be sincere in his concern for the woman who was injured, he left the premises without talking to the media.

This whole situation has left me really sad and empty. I checked on the lines person and the tournament told me that thank God she is feeling ok. I‘m extremely sorry to have caused her such stress. So unintended. So wrong. I’m not disclosing her name to respect her privacy. As for the disqualification, I need to go back within and work on my disappointment and turn this all into a lesson for my growth and evolution as a player and human being. I apologize to the @usopen tournament and everyone associated for my behavior. I’m very grateful to my team and family for being my rock support, and my fans for always being there with me. Thank you and I’m so sorry. Cela ova situacija me čini zaista tužnim i praznim. Proverio sam kako se oseća linijski sudija, i prema informacijama koje sam dobio, oseća se dobro, hvala Bogu. Njeno ime ne mogu da otkrijem zbog očuvanja njene privatnosti. Jako mi je žao što sam joj naneo takav stres. Nije bilo namerno. Bilo je pogrešno. Želim da ovo neprijatno iskustvo, diskvalifikaciju sa turnira, pretvorim u važnu životnu lekciju, kako bih nastavio da rastem i razvijam se kao čovek, ali i teniser. Izvinjavam se organizatorima US Opena. Veoma sam zahvalan svom timu i porodici što mi pružaju snažnu podršku, kao i mojim navijačima jer su uvek uz mene. Hvala vam i žao mi je. Bio je ovo težak dan za sve.

On ESPN, commentator Patrick McEnroe hammered Djokovic for not issuing addressing it right away. You only have to go back to 2017 when Denis Shapovalov got disqualified under similar circumstances while playing for Canada during a Davis Cup match. Shapovalov was 17 at the time and had the humility to go in front of the press and say he was “incredibly ashamed and embarrassed.”

Would it really be that hard for best player in the world to do the same — especially when what happened Sunday was a logical extension of what Djokovic has done many times on the court over the years when he lets frustration get the better of him.

“Djokovic has been doing things like this for many years,” McEnroe said on ESPN. “Of course he didn’t do this on purpose, but he was in control of what he did. What he did was wrong, and he has to pay the price, which is walking out of here.

“He’s done this multiple times. When you do that, you’re playing with fire and he did it one too many times.”

But the manicured apology to come isn’t going to win Djokovic many hearts and minds. Maybe there was a scenario where tennis fans warmed to him as Federer and Nadal faded into the sunset and Djokovic chased history as the lone man left on the stage.

Instead, 2020 has hardened his imagine as the spoiled spoiler. That’s not the legacy the best player ever should be carrying around.