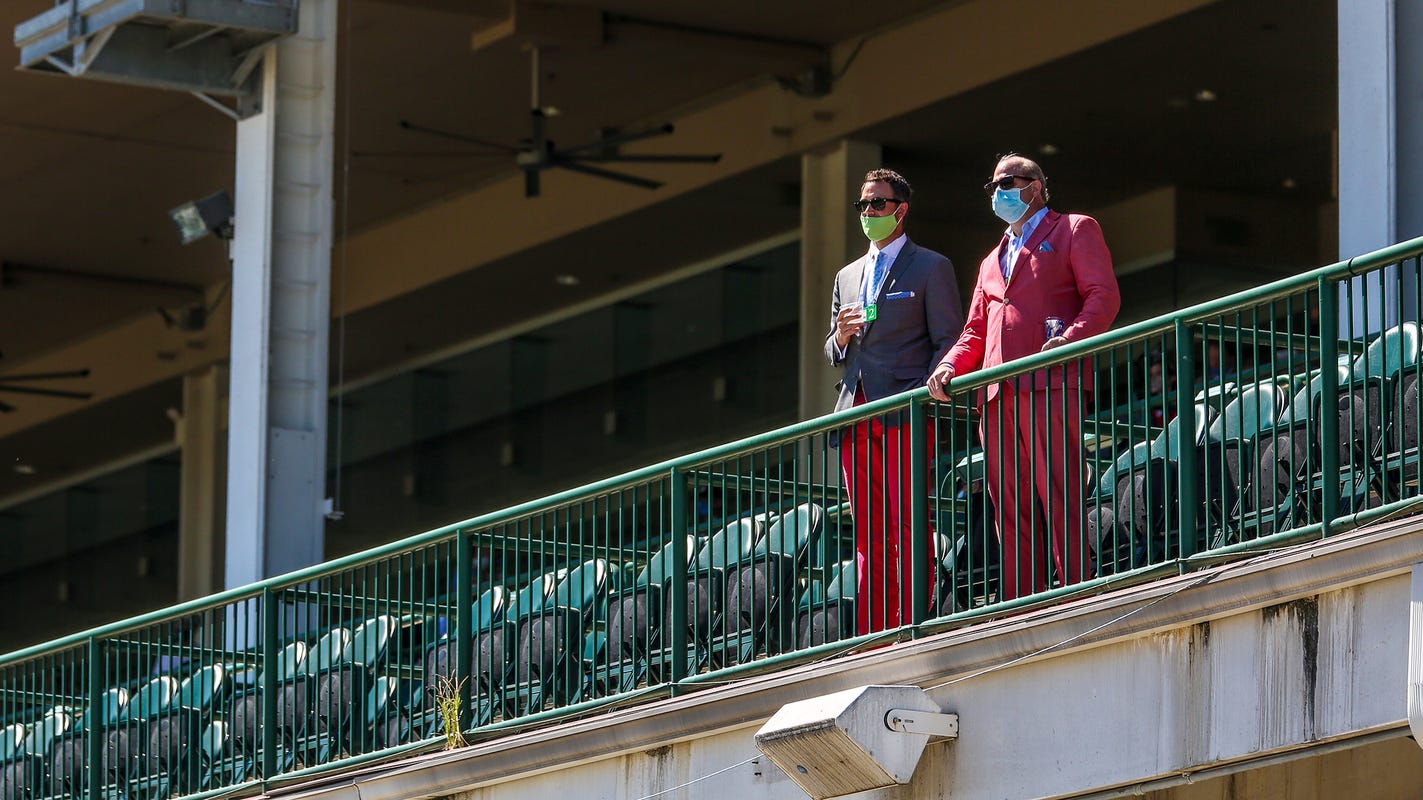 Mood inside, outside Churchill Downs somber

Courier Journal’s Dominique Yates and Kirby Adams give you a behind the scenes look at what Chuchill Downs is like on the 146th running of the Kentucky Derby.

On a balcony high atop Churchill Downs, where the moneyed and well-heeled are usually found swilling mint juleps on Kentucky Derby Day, the view couldn’t have been stranger.

In one direction, a tiny smattering of owner-connected attendees, who stood amid empty tables, looked out over acres of empty seats and a sprawling infield devoid of revelers.

In the other was a maze of chain-link fencing, beyond them National Guard Humvees awaiting demonstrators protesting the Kentucky Derby as a symbol of inequality in a time of national tumult over police shootings and racial injustice.

“Strangest Derby ever,” said one man who, like some others, declined to give his name as he juggled a racing program and scrolled through news reports as protesters and armed groups gathered in Louisville.

Delayed from its usual first-Saturday-in-May running, Saturday’s September Derby was the first ever run without fans after Churchill Downs shut it down in late August due to the coronavirus pandemic.

And inside the historic racetrack, it indeed felt like no other — amid a mood made somber by both COVID-19and the city’s racial reckoning. More than 100 days of protests have taken place in Louisville over the police shooting of Breonna Tayor, an unarmed Black woman who was shot and killed in her home on March 13.

No lines at betting windows. No outrageous infield Derby outfits. No cheering crowds. No red carpet celebrities. No hawkers with trays of icy drinks. No impromptu barbecue stands and drink-sellers in nearby neighborhoods, or sidewalk buskers and preachers. There was little of the traffic that accompanies a race drawing as many as 170,000 fans.

“It’s like a funeral,” said Evelyn Bahena, explaining the take of her father, who works for trainer Dale Romans, as she stood next to the track to watch a race.

“And they’re off,” the loudspeaker barked during a midafternoon race, an announcement that typically sends fans cheering, met with a jarring silence.

NO PARTY SCENE: At-home parties are the somber norm for 2020 Derby

An hour before the race, dozens of black-clad, armed members from the Not F****** Around Coalition, a Georgia-based Black armed group, stood across Central Avenue from the track, blocked by a line of riot police and an armored assault truck.

Protesters who want to see more accountability for the officers involved in the shooting of Taylor said the Kentucky Derby was an opportunity to have their concerns amplified before a national audience. Others said it was an event with a long history of exclusion.

Fifteen minutes before the call to the post, a plane flew over the track with a banner that read: “Arrest the cops who killed Breonna Taylor.”

As the race neared and protesters who sought to shut down the race chanted outside, the track announced a moment of silence meant to “recognize the inequities that many in our nation still face.”

Inside the track, when Churchill Downs’ longtime bugler Steve Buttleman performed “My Old Kentucky Home” minutes before the 146th Kentucky Derby race, the words were not shown on the big board, a noticeable change in tradition.

The song, which was written in 1853 by Stephen Foster, is a Kentucky slave’s lament about being sold down the river. For years some have expressed concerns over the anthem and say Churchill Downs should not play it, especially this year against a backdrop of protests over social injustice.

All the changes didn’t stop some from partaking in tradition. In the Stakes Lounge near Millionaire’s Row sat 82-year-old Bob Weihe, who attended his 74th-straight Kentucky Derby on Saturday.

He nearly broke his streak when Churchill Downs decided last month to run the race without fans before he bought a small fan stake in Derby horse Max Player. The horse’s primary owners heard his story and invited him and his son to join.

“We’ve been coming to the Derby since 1947,” said Weihe, who first came with his mother when he was a young boy. “Now I haven’t missed any. … They saved us.”

Weihe said his wife had been concerned about protests before Churchill Downs decided to have no fans after the state’s coronavirus numbers went up this summer.

“I sympathize with the protesters 100%” on racial justice issues, said his son, Mark Weihe. But he said was glad the race was being held — his 51st — in part because of its history with his family, despite its weird feel.

“My grandfather when I was young would bring me on Mondays. There would be 200 people here. That’s what it sort of feels like, going back to when I was 9 years old,” he said.

With the announcer saying, “These are the two minutes we have needed all year,” the sparse crowd of owners and others cheered as the smallest field of horses in years thundered to the finish line, with Authentic crossing first.

When the race was over, Gov. Andy Beshear wasn’t in attendance to congratulate the winners in person. He stayed home because of the coronavirus.

But all the changes and weirdness of the day couldn’t prevent Authentic’s owners from celebrating. They hugged one another next to the track, as protests continued outside.