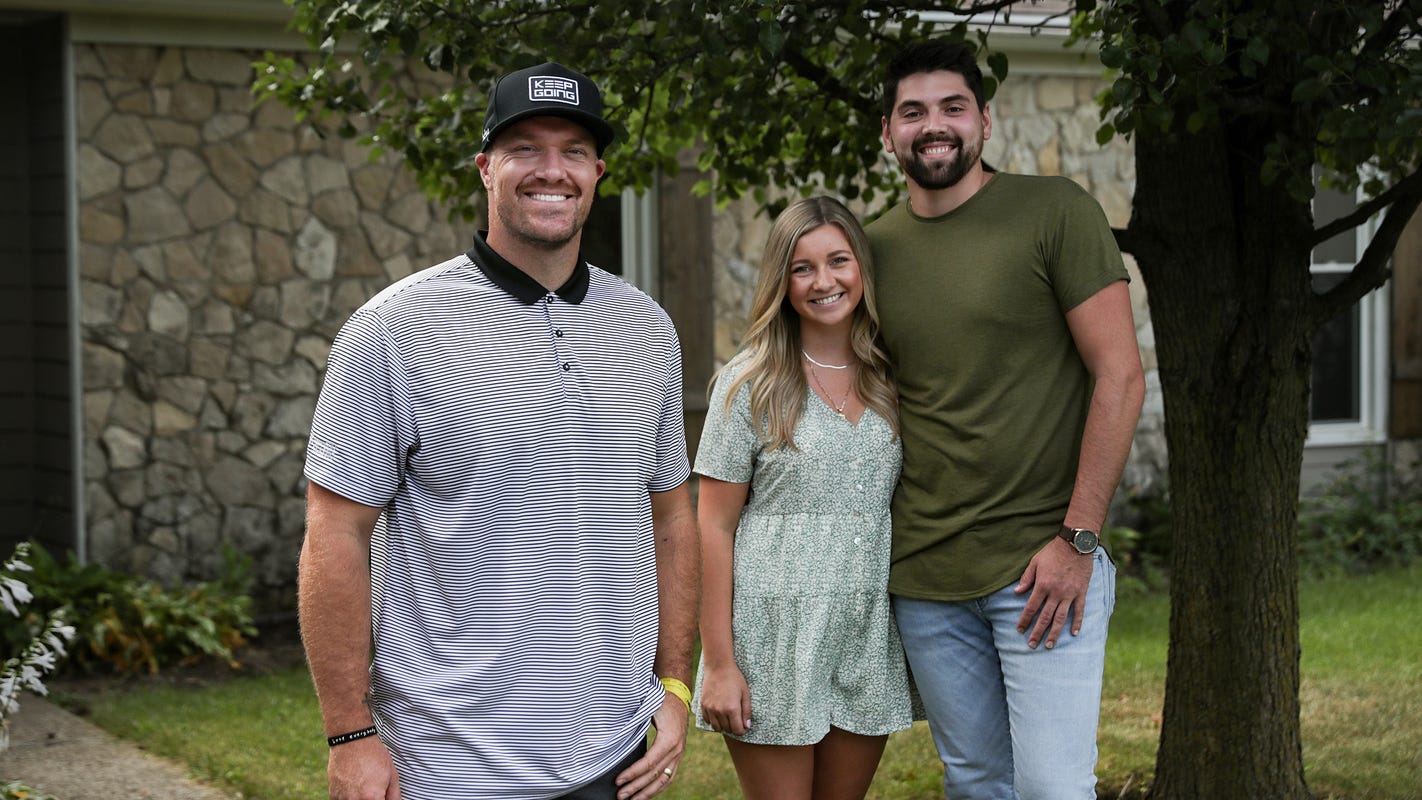 Matt Overton, former long snapper for the Indianapolis Colts, has found a new career as a realtor and broker for F.C. Tucker Company.

INDIANAPOLIS — Matt Overton is fiddling with the front door lock of a 1981 ranch house with a white kitchen, a huge back yard for Maverick the miniature dachshund and a stone fireplace in the great room that reaches to vaulted ceilings.

This is Ella Hammons’ and Kyle Mendenhall’s dream home. They didn’t know it seven houses ago back in June — when they saw that first home in Fishers, Indiana, fell in love, made an offer and were turned down.

They didn’t know it as Overton, a real estate agent with F.C. Tucker, took them through nearly 20 more houses. They put in offer upon offer — six total, all over asking price and one nearly $20,000 above list price — and were turned down on all of those, too.

They were ready to give up, to be perfectly honest, said Mendenhall. Renting would have to do.

But then Overton’s competitive juices surged — the ones he earned from a long and winding journey to the NFL as a long snapper whose seven-season career started with the Indianapolis Colts in 2012.

On a bright and humid morning last week, Overton unlocked this Lawrence Township house on White Dove Court and took Hammons and Mendenhall on a final walk through.

Hours later, the couple had signed their closing papers.

With a bottle of champagne in hand and ready to celebrate, Hammons and Mendenhall talked about the big plans they had for their new house. Overton smiled, chiming in with advice on wall colors and window replacements.

There’s nothing quite like helping someone find the perfect home, Overton said. It’s rewarding. It’s satisfying and — in today’s red hot housing market — it’s a cutthroat, competitive process that thrills him.

It’s a lot like taking the field in Lucas Oil Stadium, the team in need of a game-winning field goal and Overton ready to snap to Adam Vinatieri.

“Working with different people, being a part of a team, it’s very competitive,” Overton said in comparing his 1-year-old real estate career to his football one, “so just working and having those traits and characteristics in football has helped me in the transition.”

Go out there and work hard

When the Colts cut Overton in 2017 after five seasons with the team — one in which he made the Pro Bowl — he still desperately wanted to play. He still does and is a free agent, often posting videos of his workouts to his Twitter account.

Through it all — including short stints with Jacksonville (2017-18 seasons) and an even shorter stint with Los Angeles (four days in November 2019, but never appearing in a game) after the Colts — there was really no question what would come after football. Real estate.

Overton fell in love with the idea of property and houses because of his mom, whom Overton said was an amazing home decorator. As he got older and was earning enough money, he started investing in real estate and rental properties.

“I always really, really wanted to get my real estate license,” he said. “And so, in one off season a couple years ago, I decided to start my classes.”

Overton knew Indianapolis was going to be home for him and his wife, a former Colts cheerleader. He got licensed in the state and has his eye on a Tennessee license so he can sell in Nashville, too.

“But the Indianapolis market is great,” he said. “I have a lot of great connections here. This is home for us and it’s always been a passion of mine and now that I’m in it and helping people find homes and sell their homes? It’s been a lot of fun.”

Fun, but tough. Overton got into the industry at a time when buyer demand is high, inventory is historically low and so are interest rates. According to July numbers, home prices in Central Indiana were up 11.9% year over year and 10.5% year to date. Closed and pending sales also increased month over month.

“Hard work and persistence,” Overton said of navigating the housing market with clients. “Definitely have a mindset of going out there and working hard.”

‘It all worked out’

At their home on the cul-de-sac last week, Hammons and Mendenhall made plans to pull weeds and landscape outside and change cabinet hardware and paint inside.

“It all worked out,” Mendenhall said, of their house-hunting journey. He and Hammons credit that to Overton.

When they first met Overton, a referral from their lender, he never once mentioned he used to play in the NFL. Instead, he got to know them, gave them advice and had their back at every turn.

At Overton’s suggestion, the couple wrote a personal letter, including a bio about each of them to give to the seller of the home.

Both are Ball State graduates and so was the seller. Hammons is a speech pathologist at IU Health North Hospital. Mendenhall works at Carmel marketing firm The Web Guys. They included a photo of themselves and their dog Maverick.

“The seller fell in love with them,” Overton said.

It was a welcome change from the past two months of searching for houses. Each time Overton had to call the couple to tell them their offer had been turned down, he felt awful, he said.

“Pretty discouraging, to say the least,” he said. “With the inventory so low, there are like 100 buyers going after the same house. So it gets super competitive and it gets frustrating.”

With each offer, Overton would be positive and tell the couple: “I got a good feeling this is it.”

Until this house on White Dove Court. On their seventh, and final, offer which also happened to be under asking price, the tides turned.

The house had been on the market only four days — which is actually long “considering how hot the market was,” Overton said.

Hammons and Mendenhall loved everything about it from the moment they walked in.

“It is a happy ending,” said Overton, “but they have quite the story to tell as first-time home buyers.”

A story that stars a real estate agent who was an NFL long snapper.