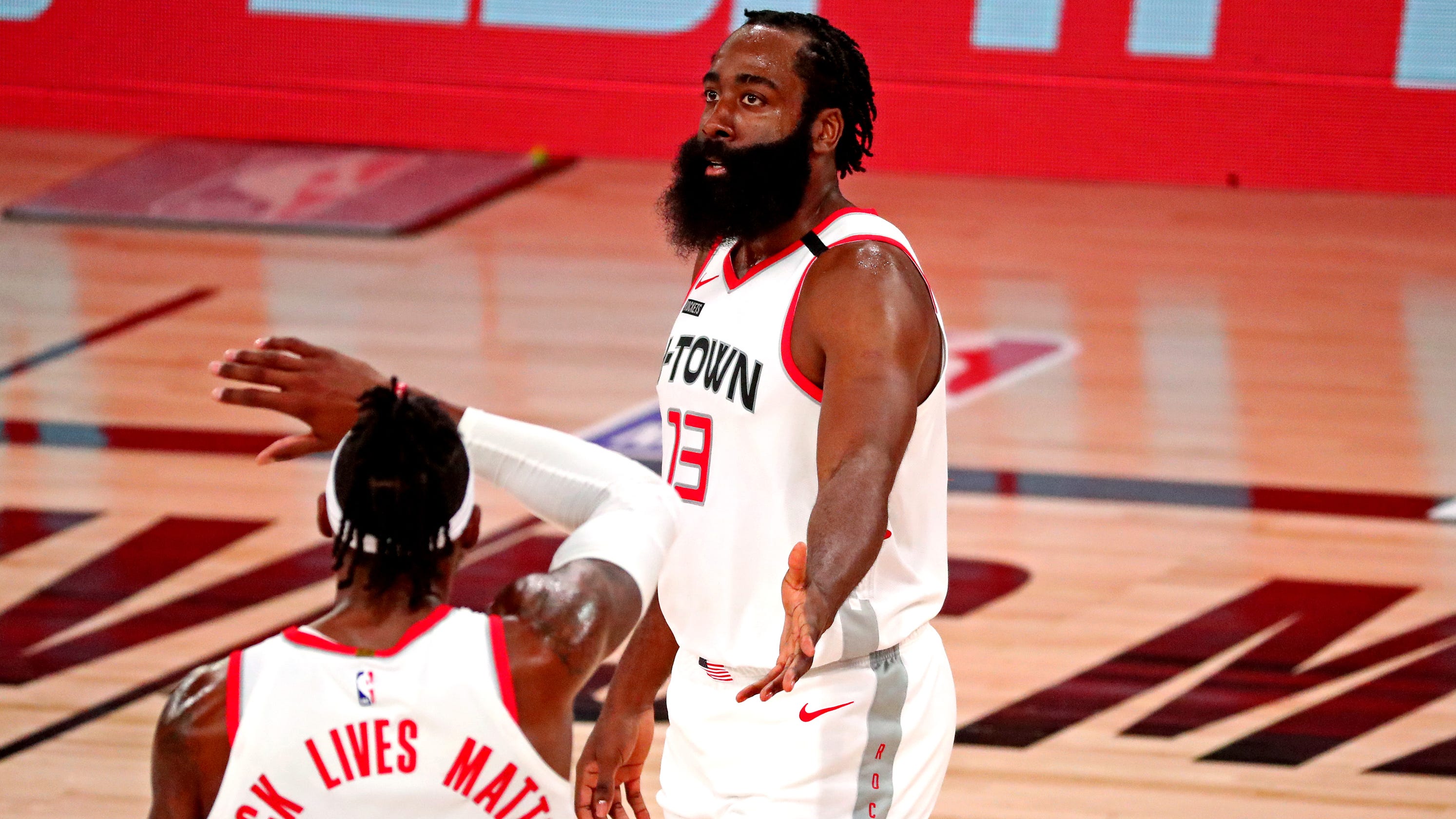 Rockets steal Game 1 from Lakers thanks to Harden and Westbrook

Lakers guard Danny Green attempted to sneak in an extra 3-point shot during a dead-ball situation. Westbrook would not allow it, though. He closed out toward Green, and then continuously tried to strip the ball away. Green still held onto the ball before an official finally collected it. But the meaningless play captured an important message.

“We’re not going to allow extra shots. You can shoot those shots tomorrow or before the game,” Westbrook said. “At least me personally, I let my guys know I don’t want to give no advantage, no nothing, to let them know that we’re here. If you’re going to shoot the ball, we’re going to be right there.”

It’s always game time for Russ, even during a timeout 😂 pic.twitter.com/FBBATJr89K

The play did not affect the game’s outcome. Yet, it fully captured why the Rockets finished with a 112-97 win over the Lakers on Friday in Game 1 of the Western Conference semifinals. The box score might suggest the Rockets simply won because James Harden (36 points) rediscovered his shooting stroke (12-of-20 from field). Or that Westbrook simply charged through a near triple-double (24 points, nine rebounds, six assists).

Harden and Westbrook played huge factors, no doubt. They represent the Rockets’ larger picture, though. They beat the Lakers by imposing their will with their star power, their position-less lineups and their tenacious defense.

“I don’t know why people keep saying we’re small. I don’t care if you 7-feet. If you don’t have heart, it doesn’t matter.”

—Harden after winning Game 1 vs. the Lakers pic.twitter.com/gRRLDdWAwa

The Rockets hurled from 3-point range as they often do (14-of-39) because they have the personnel to tilt the percentages in their favor. The Lakers inexplicably tried to match their attempts (11-of-38) without the personnel to justify it. Of course Los Angeles leaned on James and Davis, but the Rockets’ defensive aggressiveness forced those stars to commit seven of the Lakers’ 15 turnovers. While Harden hunted for foul shots beyond the perimeter and at the basket (9-of-12), Westbrook attacked the rim even if James and Davis seemed increasingly intent to rough him up.

What the Rockets have lacked in size, they make up for with positional versatility. So, P.J. Tucker, Eric Gordon and Robert Covington all took turns defending the Lakers stars and their role players from both inside and out.

What the Lakers boasted in star power, they lacked in depth. No dependable third option emerged. Lakers veteran Rajon Rondo played in his first game since nursing a surgically-repaired right thumb and recent back spasms, but he looked both rusty and ineffective. The Lakers experimented with a new fourth-quarter lineup (James, Rondo, Kyle Kuzma, Dwight Howard, Markfieff Morris) because their traditional lineup struggled against the Rockets’ unconventional one.

Because of those dynamics, James compared the Rockets to the St. Louis Rams’ “Greatest Show on Turf.”

“You can see it on film. But until you get out there, you get a feel for it,” James said. “That’s what we did tonight. We got a feel for their speed, which is what we’re fully aware of in Game 2.”

Yet, as much as the Rockets anticipate the Lakers will make schematic adjustments and show a better rhythm, let’s not get something twisted. The Rockets are not a one-trick pony. Their success does not just hinge on them going on a 3-point scoring barrage. The Rockets have taken time with fully implementing and tweaking their system.

That has stemmed from D’Antoni’s arrival in 2015, which empowered Harden to expand his shooting capabilities while playing isolation basketball. After the Chris Paul experiment eventually led to injuries and tension, the Rockets put their chips on Russell Westbrook last summer because his fast-break speed and rim attacking could complement Harden’s more plodding game.

After accepting Clint Capela had no chance at limiting elite centers as the Golden State Warriors manhandled him the past two playoffs, Rockets general manager Daryl Morey traded him in a deal that landed them Robert Covington. Houston accepted they had no size to stop Davis and James. But they added another 3-point shooter and perimeter defender.

Yet, it would be inaccurate to say the Rockets are simply playing small-ball.

“We have guys who are able to switch and play different positions and guard different guys on the court,” Harden said. “It doesn’t matter how tall you are if you have a heart and are a competitor, you can be out there on the court.”

Because of that, the Rockets’ identity lies in their defense. Their success does not solely hinge on Harden making 3s or drawing fouls. Or on the Rockets fulfilling D’Antoni’s philosophy to prioritize 3-point shooting over mid-range shots. It also hinges on how well they make stops or force turnovers. That fuels their offense, whether it involves a Westbrook drive or an open transition 3-pointer. That also allows the Rockets to become more dangerous when Harden relies on isolation-heavy plays because they are not as predictable.

“Just staying with it,” Westbrook said. “There’s going to be games where it looks like we go away from it. But collectively, we know how we play. We understand our advantage. It is up to us that we commit to that once we step on the floor.”

“We thought we had a great, unique team that could change and be different from everybody else,” D’Antoni said. “Whether it’s good enough, we’ll see. We’re not even close. It’s a long way. But we can compete.”