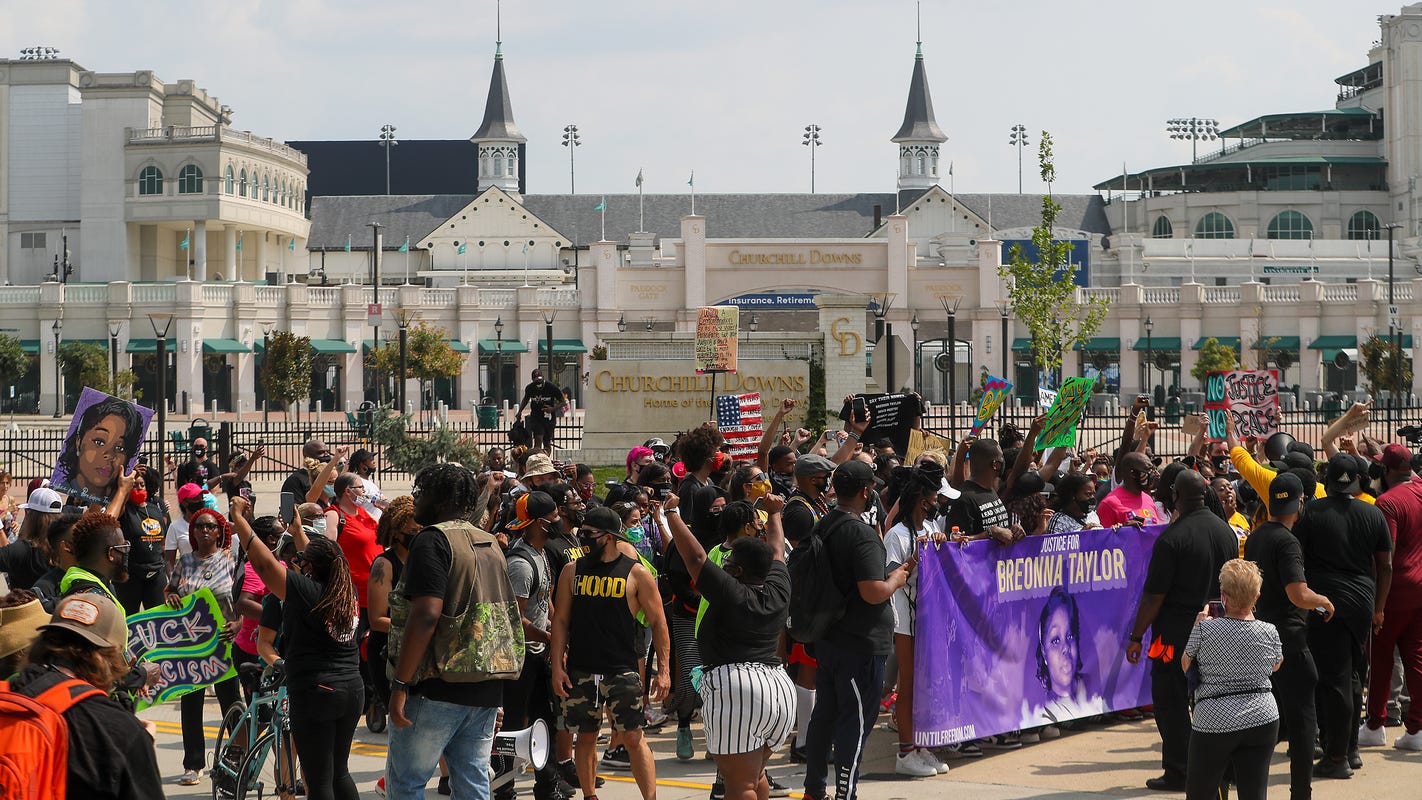 Courier Journal reporters and photographers reflect on the past 100 days of protests in downtown Louisville.

LOUISVILLE — Former Kentucky basketball star Jamal Murray teared up on national television Sunday night. He’d just scored 50 points to propel his Denver Nuggets to another win in the NBA Playoffs, and he leaned over on the court with his hands on his knees before responding to a question about his performance.

“These shoes give me life,” he said on TNT’s broadcast. “Even though these people are gone, they give me life.”

Murray’s sneakers each had a face on them: George Floyd on his right, and on his left, Breonna Taylor.

Many athletes and sports leagues have embraced statements on the racial justice movement that has led to nationwide protests over the past few months; they’ve worn shirts, stated their support and even gone on strike.

Two days ahead of the 146th Kentucky Derby, Churchill Downs released a statement of its own acknowledging national protests.

“We are not doing enough, quickly enough. That is true in our country, in our city and in our sport,” it stated.

Protests have continued in Louisville for 100 days in the name of justice for Taylor, an unarmed Black woman who was killed by police in her apartment, with demonstrators calling for the cancellation of the 2020 Derby. National and local groups have said they will protest outside of Churchill Downs on Saturday.

In its statement, Churchill Downs came short of saying “Black lives matter,” but challenged itself to be more inclusive.

“We are committed to taking real, concrete action to address institutional roadblocks to progress and playing our part in advancing the changes America so desperately needs,” it said.

It’s unclear whether the track will acknowledge the protests or Taylor during Saturday’s Kentucky Derby. When asked about the potential for such a statement, legendary trainer Bob Baffert pointed to unity.

“America is stronger when we’re united, and I just can’t wait until it gets back to the America that I know, where everybody is together, and all of this calms down,” he said on Wednesday, “but it’s something that, eventually, it’ll be fixed, but I don’t have the answer for that.”

Barclay Tragg, the trainer for Kentucky Derby favorite Tiz the Law, spoke on the protests on Tuesday.

While leagues like the NBA have made the national protests a vocal and constant point of emphasis — to the applause of some fans and the vexation of others — attention Saturday will likely be on the race itself.

“My concern is the horses, and that’s all I focus on,” Baffert said.

NBA players like LeBron James have brought Taylor’s name up multiple times in interviews, and after former Louisville basketball player Donovan Mitchell’s season ended with a heartbreaking loss Tuesday, he said the way he felt was nothing compared to victims of police brutality.

Each WNBA player is wearing Taylor’s name on their jersey, an idea spurred by former University of Louisville star Angel McCoughtry, and both of those leagues, plus some in the NFL, MLB and MLS, went on strike in the days following the police killing of Jacob Blake, a Black man, in Kenosha, Wisconsin.

“I find myself consumed less with the return of baseball, and more with the challenges that black people in this country are experiencing,” Adell wrote in June.

At the Belmont Stakes, run on June 20, jockeys took a knee ahead of the race to show support for racial justice protesters around the country, although Baffert said he was unaware of that. Five of those jockeys have mounts in the Kentucky Derby.

“We recognize that people in our community and across our nation are hurting right now,” the Churchill Downs statement read. “The atmosphere of the Kentucky Derby will be different this year as we respond to those calls for change. This will be a Derby unlike any other. As it should be.”