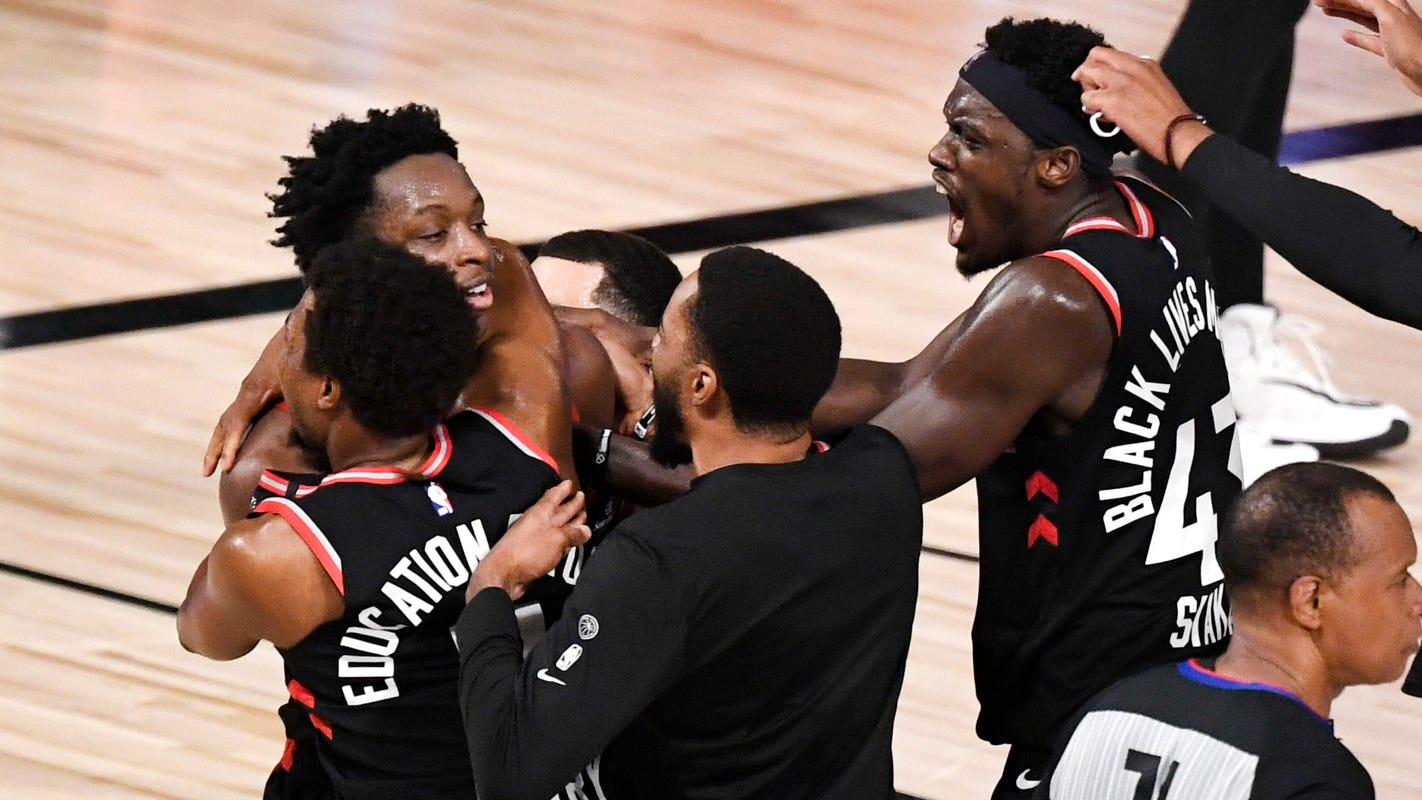 LAKE BUENA VISTA, Fla. — The situation was bleak but not hopeless. The Toronto Raptors trailed the Boston Celtics by one point with 0.5 seconds left in the fourth quarter following Daniel Theis’ dunk.

The Raptors were in a huddle during the timeout, and coach Nick Nurse designated Kyle Lowry to inbound the ball because “he has guts,” Nurse said, and designed a play with several options.

“Freddie (VanVleet) comes wheeling off there first, and Marc (Gasol) pins down for Pascal (Siakam), OG (Anunoby) clears out to the weak side, Marc tries to find an open area either at the rim or out, depending on how they played it,” Nurse said.

Anunoby was the fourth of four options. When Lowry got the ball from the referee to pass it in, he surveyed the court with Boston’s 7-foot-6 Tacko Fall guarding the pass.

In the actions Toronto created with Lowry looking for an open player, the Celtics lost track of Anunoby. Jayson Tatum and Theis focused on VanVleet. After Gasol set a screen for Siakam, he also set a screen on Jaylen Brown, leaving Anunoby open on the far side of the court.

With just enough time to catch and shoot, Anunoby did exactly that and drilled a corner 3, giving the Raptors a 104-103 victory in Game 3 on Thursday.

Anunoby barely had a reaction as his teammates mobbed him.

“I expected to make it. I don’t shoot trying to miss. … I wasn’t surprised.”

OG Anunoby with the coldest answer on his Game 3 buzzer-beater. pic.twitter.com/2XUCR3c2pK

Said VanVleet: “I know he was excited. That’s just his nature. Being in those situations, sometimes you don’t know what to do. I don’t think he’s a guy who’s going to run around the court. That was true OG form right there to knock down the biggest shot of his life and act like nothing happened. The rest of us were more excited for him than he was for himself.”

The shot saved Toronto’s season. The Raptors were on the verge of a 3-0 deficit. Now, it’s a much more manageable 2-1 deficit, and they came back from a 2-0 hole in last season’s Eastern Conference finals against Milwaukee and won the series.

“It’s OG’s moment,” Lowry said. “That’s a great moment for that kid. I’m so happy and so proud of him. The pass meant nothing. The shot was everything. … He deserves every ounce of love and celebration that he’s going to get tonight. The kid works extremely hard. That’s his moment. Let him live in it, and I’ll ruin tomorrow when he watches film and I tell him what he messed up on.”

Anunoby finished with 12 points and 10 rebounds, and he helped keep the Raptors close in the first half when Lowry, Siakam and VanVleet continued with their offensive struggles. He had nine points and was Toronto’s second-leading scorer behind Lowry’s 15 in the first half.

Lowry wanted to deflect credit. But his cross-court pass was magnificent in its own right.

“There’s not a lot of times that you probably want a — let’s call him 6-foot-1 — guard taking the ball out of bounds in a late-game situation because you saw they tried to put size on him,” Nurse said.

First off, Lowry had Fall waving his long arms in front of him. To create a little extra space, Lowry backed off the sideline near Boston’s bench. He watched as players set the play in action with screens and movement, and he surveyed the defense.

He noticed Anunoby slipped unguarded to the corner on the opposite side of the court — about 55 feet away. Lowry had to launch the perfect pass — over Fall but not too much air under the ball so that a defender could get to Anunoby and disrupt the play.

“It was a beautiful pass,” VanVleet said. “We don’t give Kyle as much credit as you guys give him. We expect those things from him. So it’s not that amazing from our perspective. I’ve become accustomed to seeing him do those things on a nightly basis.”

The Raptors have struggled offensively in the series and had trouble shooting through the first 2½ quarters on Thursday. But they found just enough offense from Lowry (31 points), VanVleet (17 of his 25 points in the second half) and Siakam (14 of his 16 in the second half).

Their defense remained solid, holding Boston to 46 points in the second half.

Add one great pass and one clutch shot, and the series is a lot closer than it looked after the first 47 minutes, 59.5 seconds of Game 3.