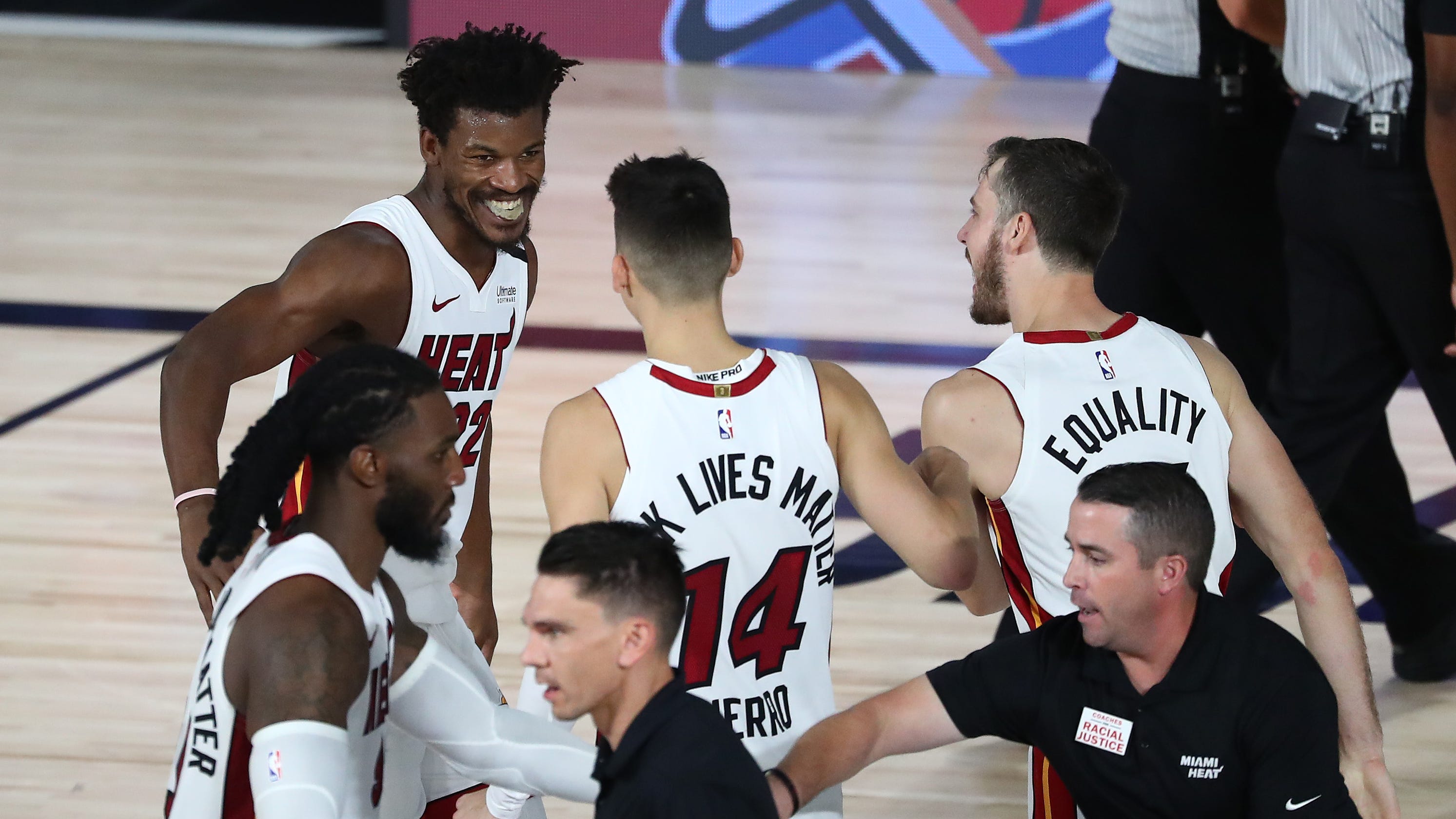 What I’m Hearing: USA TODAY Sports’ mark Medina was on hand for Game 2 between the Celtic and Raptors and breaks down Toronto’s frustration with the officiating.

LAKE BUENA VISTA, Fla. — In a game where Milwaukee and Miami fouled shooters on the perimeter regularly, the Heat got the last call that mattered of a crazy sequence to end the game.

Following Milwaukee forward Khris Middleton’s three free throws with 4.3 seconds left in the fourth quarter, which tied the game, Miami’s Jimmy Butler made two free throws with no time remaining after he was fouled by Giannis Antetokounmpo, giving the Heat a 116-114 victory – and a surprising 2-0 series lead over the Bucks in the Eastern Conference semifinals.

Butler professed over and over that he didn’t care who did the scoring as long as the Miami Heat won.

Jimmy Butler celebrates with teammates after hitting the free throws that gave the Heat the Game 2 victory over the Bucks. (Photo: Kim Klement, USA TODAY Sports)

The Heat nearly blew a 113-107 lead with 19.8 seconds left. Antetokounmpo scored on driving dunk, and the Bucks forced a steal, leading to a Brook Lopez layup with 8.5 seconds left in the fourth quarter, making it 113-111.

Butler made just one free throw after a foul, giving Milwaukee a chance to force overtime. Bucks coach Mike Budenholzer drew up a play, and Miami guard Goran Dragic fouled Middleton on a 3-pointer. Overtime seemed like a possibility, but Butler drew the foul.

Jimmy Butler gets the foul at the buzzer 😱😱😱 pic.twitter.com/DYQUkCBcoK

With Milwaukee and Toronto losing the first two games of their series, it’s the first time since 1984 that the top two seeds in the same conference are down 2-0.

The Heat are confident, and the Bucks are in trouble. Bubble ball has not been kind to the Bucks, who had the best record in the regular season but have yet to rediscover that same success.

Jimmy Butler hits the free throw for the win! pic.twitter.com/7L5cGaUwSi

Time after time, the Heat had answers for the Bucks. When Milwaukee cut Miami’s lead to 97-93, Herro and Crowder made consecutive threes, pushing the Heat’s lead to 103-93. When the Bucks cut it to 105-102, Olynyk’s three, two Butler free throws and two Adebayo free throws gave the Heat a 111-102 lead with 1:56 remaining in the fourth quarter.

Once again, the Heat took advantage of Milwaukee’s willingness to give up 3-pointers, outscoring the Bucks 51-21 on threes and shooting 37.8% compared to Milwaukee’s 28% from that range.

And just as important as what the Heat did offensively, they once again limited Antetokounmpo. Miami’s game plan is obvious: don’t let the reigning MVP dominate. Antetokounmpo had 29 points and 14 rebounds but just three assists.

Milwaukee also had 14 turnovers, which Miami turned into 22 points.