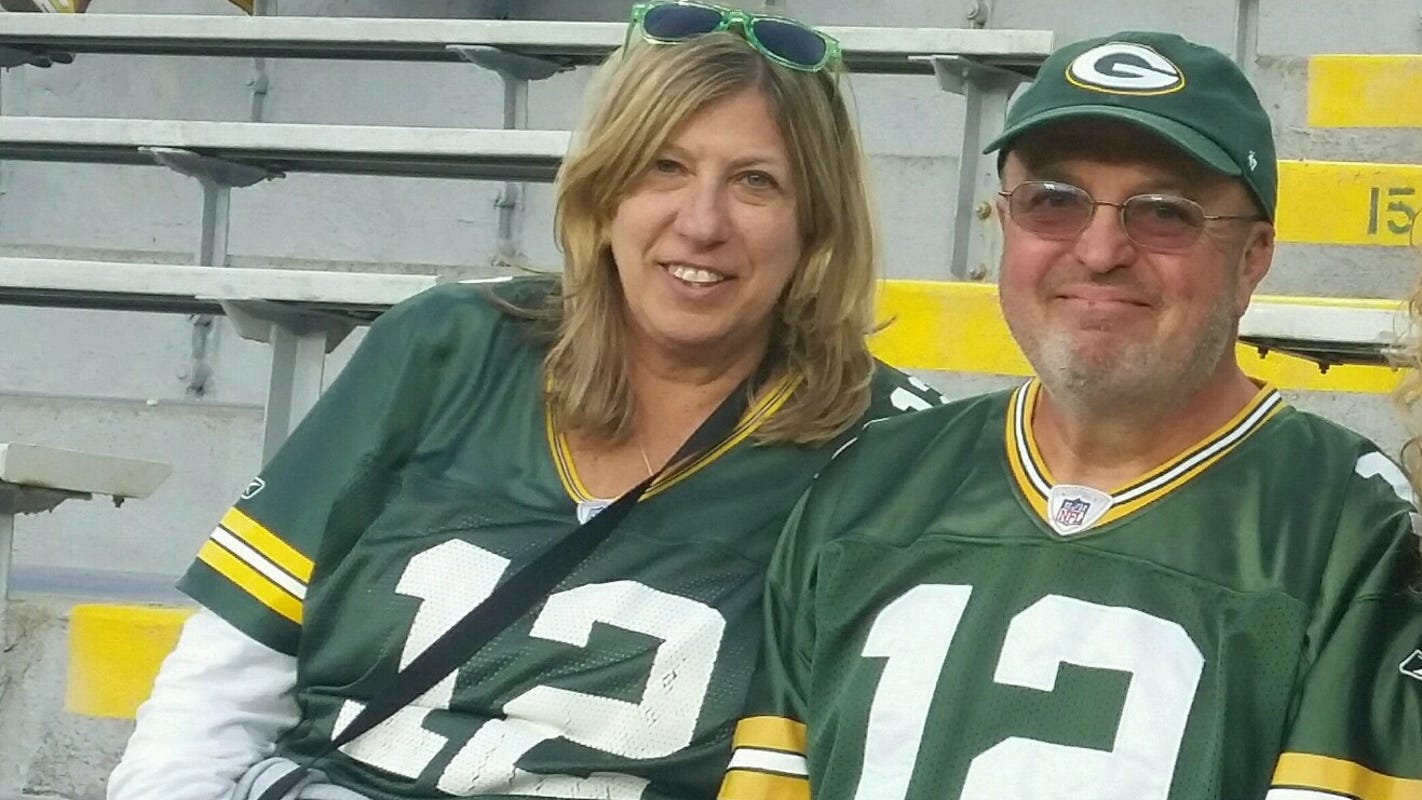 Fans will have a range of emotions if they can’t see the Green Bay Packers play in person during the 2020 season due to the coronavirus pandemic.

Whyte and other dedicated Packers fans will see their game-attendance streaks interrupted this season because of the coronavirus pandemic. Interrupted, mind you, not broken. Asterisks for everyone, please.

The Packers and several of their opponents will start the 2020 NFL season without fans in the stands, and even if they do allow fans, attendance will be capped significantly below stadium capacities.

The Packers will open the season on Sept. 13 in Minnesota. The Vikings will allow no fans for that game. The first game at Lambeau Field will be Sept. 20 against the Detroit Lions. No fans will be allowed for that game either.

Sandi and Drew Whyte of Pittston, Pa., at Lambeau Field. They are season ticket holders and regular attendees at Packers games. (Photo: Courtesy of Drew and Sandi Whyte)

Whyte said he and wife Sandi started going to games in the 1990s and it just continued. He did miss a game in 2003 — that pesky heart attack.

“I ended up having to watch from the local hospital,” Whyte said. “That was the one I missed. That’s the last one.”

Craig Cluberton is at 192 consecutive home games dating to 1996. Justin Sterna, a relative newcomer and younger, trailed the other two, but was catching up fast because he attended home and away contests dating to 2016. He was at 57 consecutive games, including playoffs, after last season’s NFC championship.

“It’s out of my control, so I’m not going to worry about it. If I can get to a game, I’ll go to a game,” said Cluberton, who lives in Richmond, Virginia. “I’m just a little peanut in a big ocean and there are a lot of other people that have a lot bigger problems than not going to Packers games.”

But acceptance is not approval.

“I’m definitely bummed out. It’s kind of a weird feeling because right now, if this was a normal time, Sandi and I would have just got back from training camp. You’re all jacked up, ready to go, and all the arrangements would have already been made,” said Whyte, a resident of Pittston, Pennsylvania. “It’s kind of like an empty feeling. I may have to watch all 16 games on TV, which I’ve never done.”

“I ended up having to watch from the local hospital. That was the one I missed. That’s the last one.”

Sterna, of Mequon, won’t take no lightly. He’s going to every game, even if they won’t let him in the door.

“I won’t count it toward my streak, but I’ll take a picture outside the stadium and I will be able to say I was there,” he said. “Any games I can get into this season, if they do permit fans, I will definitely attend.”

The trio did not set out to build streaks, but found themselves there anyway.

“Before the season started in ’96, I had this feeling the Packers were going to do well, so I decided to go to all the home games. That was eight games in 1996. I never planned on continuing this streak, but every year it came up and I decided to try and go to all the games,” Cluberton said.

Sterna’s family owns 10 season tickets, although he generally takes only two games per year. He acquires the others on his own.

For Whyte and Cluberton, who both are retired, their football season so far has been disconcerting. Their usual process is to make flight and hotel arrangements as soon as the schedule comes out and start watching the Packers closely.

No training camp and no preseason this year makes it harder to get connected.

“You’re saying to yourself, ‘am I even going to be a part of this?'” Whyte said.

Over the years, they’ve made friends at the games and enjoy meeting new people. Cluberton is a regular at Event USA’s tailgate party at Green Bay Distillery, where he meets fans from around the world.

Whyte has Wisconsin friends who meet him at the games. For both, it’s the journey, the routine and the people are as important as the games themselves.

Whyte and Sterna also have developed an appreciation for Packers fans, generally. They find them more welcoming than fans for many other teams. At Lambeau, opposing fans are as likely to be offered a brat and a beer as a hazing, or worse.

“I wasn’t sure, until this streak, how different the Lambeau fans are,” Sterna said.

Also, there’s no discounting the attraction of Lambeau Field itself. Whyte said newer stadiums, like AT&T Stadium in Texas, are impressive, but none can match Lambeau Field for history, nostalgia and charm. Cluberton agrees.

“Usually what happens when the season starts, I say, ‘Ah jeez, here we go again, and then I get to my seat in the first game and I say, ‘God, I love this place.’ It’s just something about it,” Cluberton said.

None of the three are counting this year out.

Cluberton’s not convinced playing without all fans is necessary. There’s plenty of room for social distancing in the bowl.

“People are dealing with this all the time. I haven’t stayed home the whole time. I go to the grocery stores, I go shopping. I don’t see much difference, but I guess that’s a personal decision,” he said. “If I can get a ticket, I am going to get a ticket, yes sir.”

NFL WEEK 1: Packers-Vikings season opener in Minneapolis will be played in empty stadium

Whyte opted out on buying season tickets this year, an option the Packers offered ticket holders who wanted to take a pause during the pandemic but still buy their tickets next year. That means Whyte won’t be in the pool to try for tickets if fans are allowed at games. He believes tickets will be available on the secondary market to people willing to pay.

Sterna developed an acquaintanceship with Packers President and CEO Mark Murphy, and while he concedes it probably will not help, he hand-delivered a letter to Lambeau Field asking Murphy whether he might be allowed into the games, even for a moment and a picture.

“I said if there is an exception to allow me to be in the games, I would do whatever it takes,” he said.

Because his streak includes road games and he’s not independently wealthy, Sterna’s had some close calls. He often waits until just before kickoff to buy tickets in the hope prices will come down, and he called on friends and acquaintances with connections when the possibility of getting shut out was too real.

“The Patriots game (in 2018) was really, really difficult. The Chargers game (in 2019) was one I almost didn’t get into. There’s been four or five close calls. I love challenges,” he said.

If you love talking football, we have the perfect spot for you. Join our Facebook Group, The Ruling Off the Field, to engage in friendly debate and conversation with fellow football fans and our NFL insiders. Sign up now!