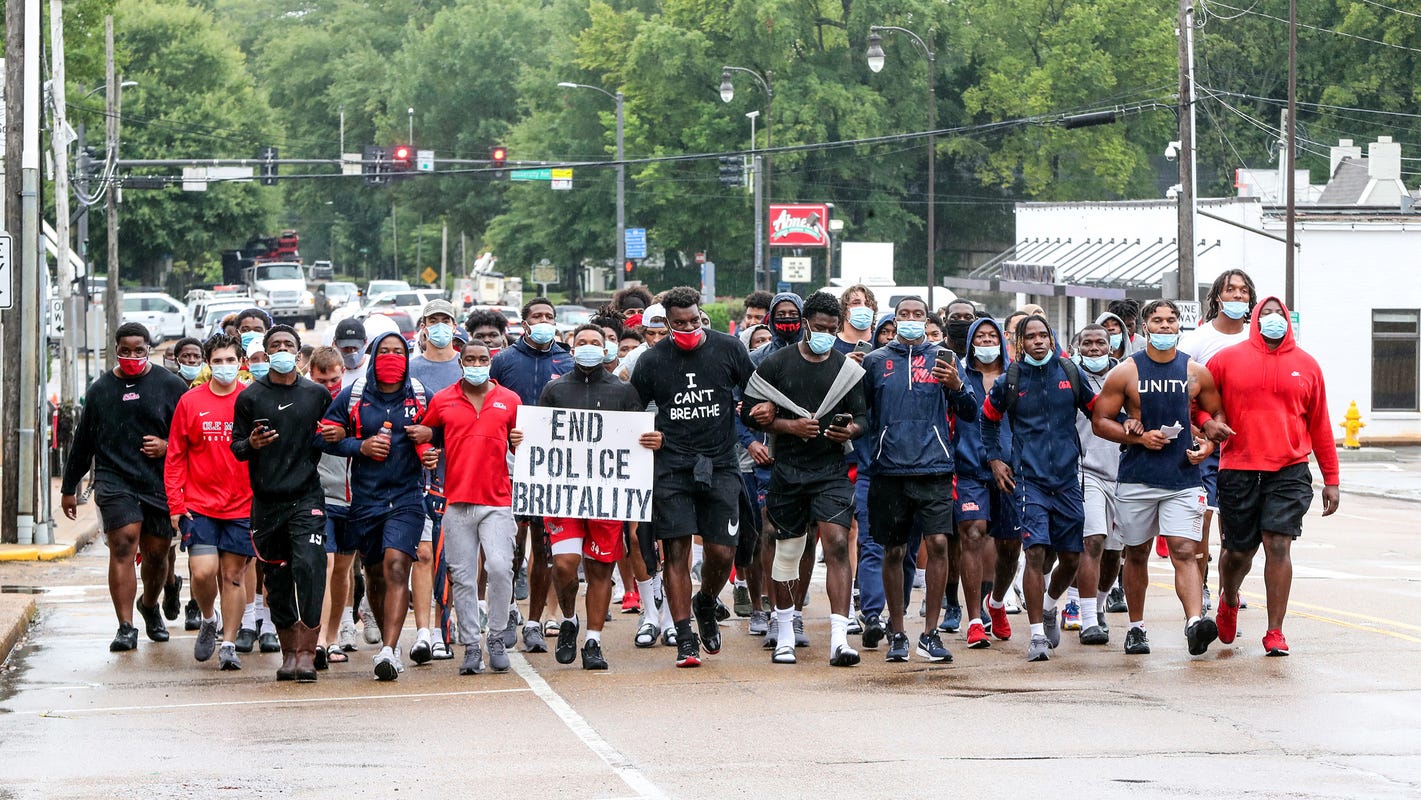 OXFORD, Miss. — Don’t think of Mississippi’s player march last week to protest police brutality as an ending to the story. It’s more of a statement of action.

The Ole Miss football team didn’t practice last Friday. A practice was scheduled. But it didn’t happen. Rather, players and coaches marched from campus to downtown Oxford in solidarity with the other national protests related to the police shooting in Kenosha, Wisconsin where an officer shot Jacob Blake seven times in the back.

As linebacker MoMo Sanogo explained, the march was a spontaneous reaction to the way players were feeling on Monday.

“Coach could feel that the guys had a lot on their minds and were feeling some type of way,” Sanogo said. “He asked us the night before, the leadership council, what we want to do. ‘Do you want to play or practice? I support you 100%.’ We felt that we needed to play.

“We got up here and some guys just seemed really affected. We called a team meeting. Coach was behind us. We were like ‘Hey, what do we want to do?’ We decided as a team that we wanted to go march toward downtown Oxford.”

Kiffin not only approved of the march. He participated. Though the one thing Kiffin wants to make clear is that the march was a reaction to national news. It wasn’t a commentary on the law enforcement in Oxford.

“This is an issue going on around the country that we’re seeing is bringing attention to it,” Kiffin said. “But this is not a local issue. This is not an issue with the police around here. I’ve been here for a short time, but they’ve been phenomenal around here.”

A group of players is scheduled to meet Oxford police officers later this week to discuss the national landscape further. Sanogo has experience working with Oxford Police Department after he organized and coordinated a march in June that was approved and permitted by officers. He said he wants to reach out to Oxford police chief Jeff McCutchen to try to find a time when the most possible players can engage in the conversations and have a healthy relationship with Oxford police.

But that’s not the only thing Sanogo wants to come out of Friday’s march.

“That’s not going to be the last thing we do,” Sanogo said. “Maybe the other things won’t be as drastic. Maybe the other things will be going and spending time with the Boys and Girls Club of North Mississippi or us pitching in money to feed some family that needs help. Whatever it is we’re going to do things to make a difference in our community and make a difference period.”

The next time Ole Miss openly demonstrates as a team will likely be dependent on national news. Kiffin said he expects the team to react when major news events like the police shootings of Blake or George Floyd happen.

Sanogo was asked if these demonstrations might continue on Sept. 26 when the Rebels open their 2020 season at home against Florida. According to Sanogo, all is possible.

“We haven’t (discussed this as a team) yet because we’re focusing on getting the team prepared,” Sanogo said. “But I’m sure we’ll do something. I’m sure we’ll even reach out to Florida and do something as a unified unit. I don’t know what it might be, but there’s a great opportunity and a great platform to do it. I don’t see why not.”