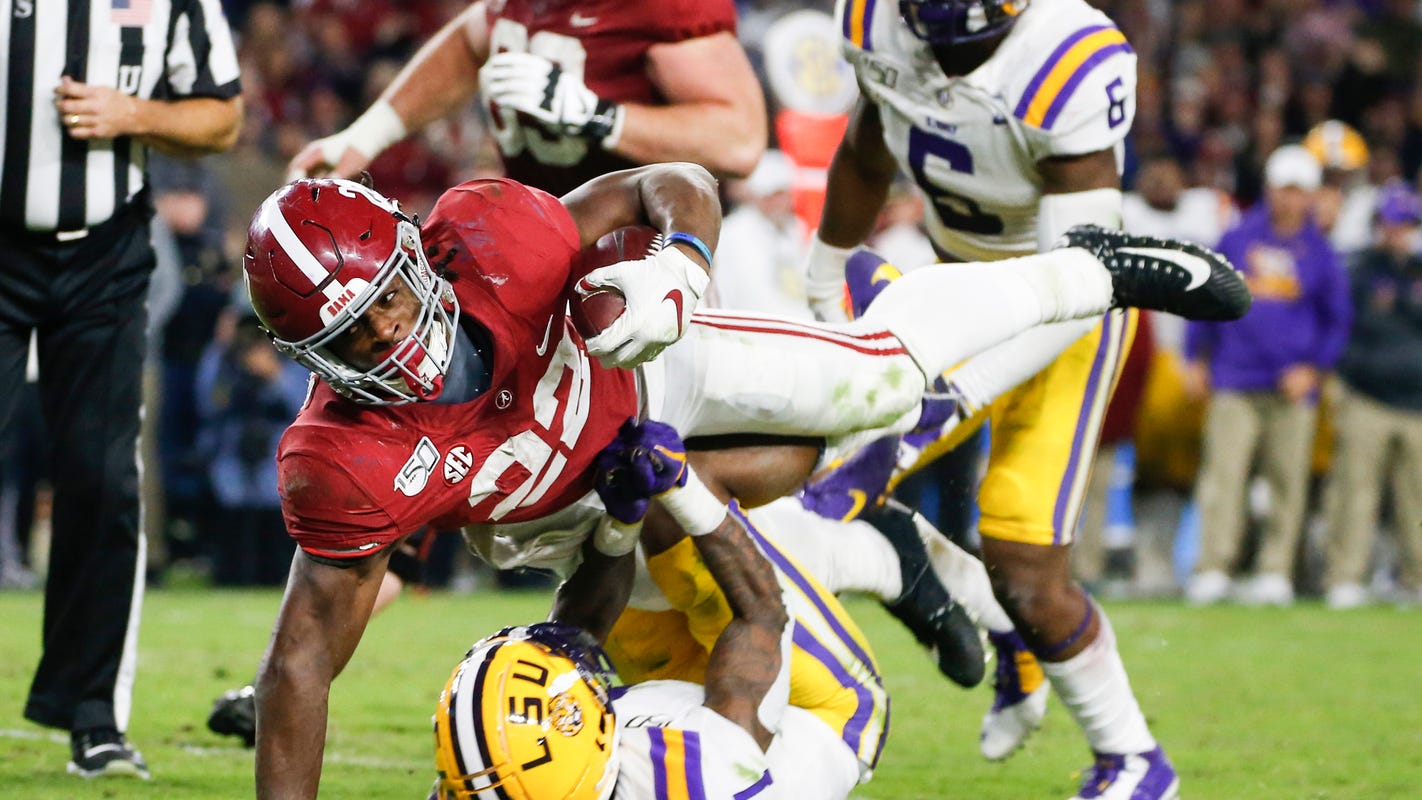 Between Alabama, Georgia, Florida, LSU and others, the SEC is set to dominate a strange 2020 season.

The Big Ten’s decision to not play this fall takes away the SEC’s strongest competition for the title of college football’s best conference. While Clemson has become the top individual program nationally, only the Big Ten could offer a similar sort of depth to match the SEC’s annual barrage of College Football Playoff contenders.

And with Ohio State, Penn State and others out of the equation, the SEC’s road to the national semifinals will be even easier.

Even with Big Ten teams included in the voting, the SEC accounts for three of the top five, four of the top eight and six of the top 13 in the preseason Amway Coaches Poll.

In another year, the question each preseason is whether the SEC can get two teams into the playoff. The question this season: How can the SEC not?

Teams will not play non-conference opponents and will add two cross-divisional opponents in SEC play. Records do not include conference championship game. (Each team’s overall ranking in the preseason 1-76 ranking is in parentheses.)

Bringing back linebacker Dylan Moses and defensive end LaBryan Ray from injury further the case for Alabama having the best defense in the FBS. Moses, who suffered an ACL tear on the eve of last season, is a first-round talent and a prime candidate for postseason accolades. The Crimson Tide defense should be the program’s best since the 2017 unit that led the nation in yards allowed per play.

With Dominick Blaylock out for the year after his second major knee injury, Georgia will dig even deeper into a young receiver group largely built across the past two recruiting classes. Headlined by sophomore George Pickens (49 catches for 727 yards in 2019), the group added five receivers in the 2020 recruiting class; the best bet to contribute from the start is Jermaine Burton, one of three top-100 talents Kirby Smart and the Bulldogs inked at the position.

The two biggest games on Florida’s schedule: Texas A&M on Oct. 10, for the chance to set a tone in the Gators’ first game against a ranked opponent, and Georgia on Nov. 7, due to the obvious importance to the East division race. A win in either or both matchups would reverse recent history. Florida has dropped three in a row to Georgia and went 1-7 against A&M coach Jimbo Fisher during his stint at rival Florida State.

A quick rundown of LSU’s losses on offense. The Heisman Trophy winner (Joe Burrow). The hotshot coordinator (Joe Brady). The No. 1 receiver (Ja’Marr Chase). The No. 1 receiver (Justin Jefferson). The do-everything back (Clyde Edwards-Helaire). Four starting linemen. The losses are severe. The drop in production will be significant. But remember where LSU is coming from after 2019 … even a noticeable drop wouldn’t be enough to keep this offense out of the top 25 nationally.

What was the friendliest schedule imaginable (relative to playing in the SEC) now carries a dramatically increased degree of difficulty. Instead of playing Alabama near the end of the season, the Aggies go to Tuscaloosa on Oct. 3. Rather than drawing crossover games against South Carolina and Vanderbilt, the Aggies add Tennessee and Florida from the East. Suddenly, that easy drive into the top 10 is littered with potential potholes.

All the national attention paid to sophomore quarterback Bo Nix’s development as a second-year starter has overshadowed Auburn’s worrisome rebuilding project on the offensive line. With just one returning starter and no spring drills to begin identifying a new five, the Tigers were already behind the curve heading into August. But the lack of practice time due to COVID-19 outbreaks has set this group back and made the position a major concern. Good thing the Tigers have until Sept. 26 to solve the problem.

Progress in developing depth across the board means Tennessee will be less reliant on newcomers than a year ago, when true freshmen occupied key starting roles on both sides of the ball. That’s one marker of the program’s momentum under Jeremy Pruitt. There will still be roles for impressive newcomers such as wide receiver Jalin Hyatt, who is already drawing strong reviews.

The Wildcats’ offensive line has a case for being the best in the SEC. Four starters return in tackles Landon Young and Darian Kinnard, center Drake Jackson and guard Luke Fortner, with Kinnard and Jackson singled out for preseason All-America recognition. The line sets a terrific foundation for this understated offense and program.

New year, new coach (Lane Kiffin) and a familiar question: John Rhys Plumlee or Matt Corral? Kiffin’s history on offense might suggest that the purer passer, Corral, would have a slight edge at quarterback. But that would overlook Kiffin’s imagination as a designer and schemer. Look for the Rebels to find a way to use Corral’s arm while featuring Plumlee’s athleticism and running ability.

Watching Mike Leach’s offense take on the SEC is one of the most interesting subplots of an already interesting season. Will the offense take immediate flight? How steep is the learning curve? Even in an abbreviated year, look for Stanford transfer K.J. Costello to threaten Dak Prescott’s single-season passing records in 2020.

Will Muschamp’s defense is strongest in the secondary, paced by the cornerback duo of Israel Mukuamu and Jaycee Horn. Both players have NFL futures. The question is whether the Gamecocks can team this solid secondary with a healthier pass rush. Last year’s defense accounted for just 24 sacks, good for 80th nationally, even as lineman Javon Kinlaw played his way into the first round of this year’s draft. There may be a way to create opportunities for five-star true freshman Jordan Burch to make an immediate impact as an edge rusher.

One of the keys to Missouri’s long-term potential under new coach Eli Drinkwitz will be reclaiming a foothold inside the Tigers’ talent-rich home state. You’re beginning to see the new staff’s recruiting message land in the 2021 cycle: Missouri has verbal commitments from four of the state’s top 10, according to 247Sports.com, part of a class that currently ranks inside the top 30 nationally.

There are few reasons for excitement and dwindling reasons for optimism. Case in point: Vanderbilt’s offensive line has gone from a potential asset — or at least a unit pegged for noticeable improvement after a spotty 2019 — to an area of concern after several players with starting experience decided to opt out of playing due to COVID-19. Like Arkansas, the Commodores will be season-long underdogs.

Arkansas has lost 19 SEC games in a row, the sixth-longest losing streak in conference history. (The Razorbacks’ last SEC win came against Ole Miss on Oct. 28, 2017.) The three best chances at ending this streak: at Mississippi State on Oct. 3, vs. Ole Miss on Oct. 17 and at Missouri on Nov. 28. A third winless SEC season in a row would leave Arkansas’ losing streak in third, behind Sewanee (37 in a row from 1933-40) and Vanderbilt (33 from 1976-81).

The preseason all-conference team includes players who have opted out of playing this season due to COVID-19.