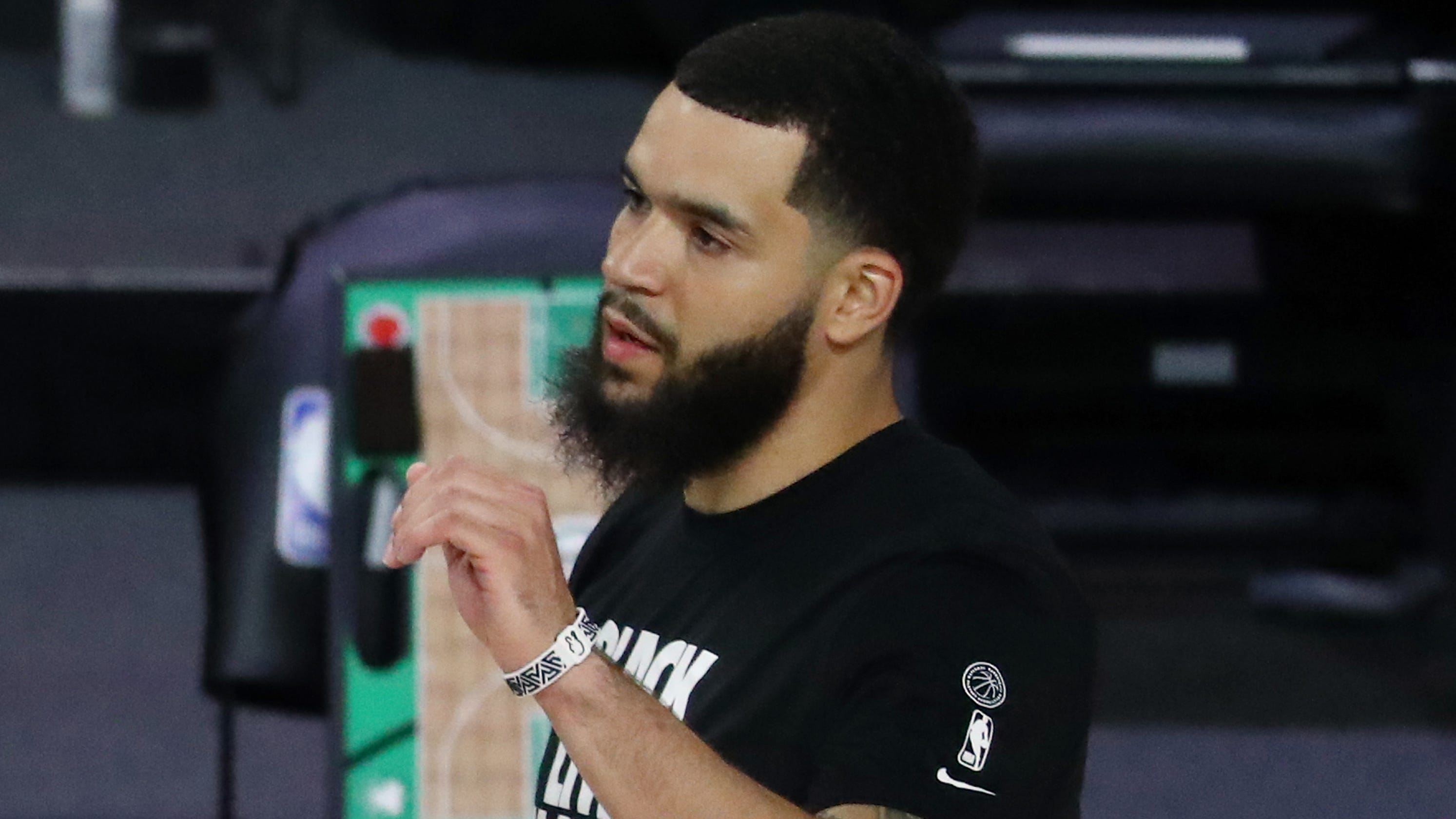 NBA players beginning to be reunited with families inside bubble

LAKE BUENA VISTA, Fla. — As he stood in the team’s layup line Tuesday, Toronto Raptors guard Fred VanVleet stared toward the basket, focusing in on his routine before playing the Boston Celtics in Game 2 of their second-round series. Then, out of the corner of his eyes, VanVleet saw attentive fans on the sideline calling out his name.

VanVleet’s children wanted to greet him before tipoff.

“I miss my family,” VanVleet said earlier this week. “Family is huge for me. It’s been a while.”

Before Monday, VanVleet had not seen girlfriend Shontai Neal, his 2-year-old daughter Sanna and his 1-year-old son Fred. Jr. since Father’s Day (June 20). Two days later, the Raptors traveled to Fort Myers, Florida, for practice before arriving in the NBA campus here in early July. Since then, VanVleet has stayed on the quarantined campus where his days have mostly consisted of basketball and nothing else.

The beginning of the second round of the playoffs have coincided with the league allowing players’ families to stay here on the Disney campus, as the eight teams that remain have already been gone 1½ months with three more rounds still to complete.

Therefore, the greeting with VanVleet and his children, which VanVleet’s girlfriend documented, carried more significance..

Fred VanVleet’s kids were too excited to see him 🥺

The video went viral and sparked smiles around the NBA.

“That is absolutely priceless. I had goosebumps watching it,” Miami Heat coach Erik Spoelstra said about the VanVleet’s reunion. “I just think it’s really cool. Everybody’s sacrificed a lot.”

When NBA teams arrived here between July 7-9, the league determined that no family or friends could visit amid concerns about the coronavirus pandemic. The NBA allowed for family to visit this week since fewer teams are now staying on campus following the completion of the seed-in games and first round.

According to the NBA’s health and safety protocols, teams that advance past the first round of the playoffs can reserve guest rooms that match the team’s roster size. Although it does not specify an exact number of guests allowed, the protocols state the number is “subject to Disney’s room occupancy rules and guidelines.” A player can determine anyone a guest so long as that person is not a certified agent. Most of the players’ guests are either wives, girlfriends and their children. Players can invite only one guest to a game, but they are allowed to bring small children.

“It’ll just be good to be around some people that care about you, that you care about outside of your teammates,” Los Angeles Clippers guard Lou Williams said. “This environment can be a little mundane at times, so it’s nice to have some fresh energy.”

Still, some have opted out of having their family visit for various reasons.

After that process, all guests have to quarantine on campus for an additional seven days and have to receive seven consecutive negative tests before leaving their room.

Clippers center JaMychal Green plans to have his girlfriend and children visit should the team advance to the Western Conference finals. Yet, he still harbored concerns about his kids becoming stir-crazy on campus. People can swim, exercise, golf and fish on campus, but there are no options beyond those activities. Everyone also has to observe social distancing and mask-wearing rules.

“I didn’t want them to come here and get bored,” Green said. “My kids like to play and like to go outside. So there’s really not much here to do.”

Usually, pets do not need to feel as entertained. They are used to quarantined life even in normal times. Unfortunately, they do not meet the criteria for guests.

“I would love to have my dogs in here, but they are not allowing pets,” said Los Angeles Lakers guard Danny Green, whose fiancée will visit. “But I think pets would definitely lighten the mood. That would help if anybody who has any type of say-so to get some dogs in here.”

First things first. Coaches and staff members wish they could invite their family, too. But the NBA prioritized limiting the number of people on campus for safety reasons. The NBA accommodated the players’ wishes partly because it remained mindful that on-court performance often correlates to a person’s well-being.

“It doesn’t make it easier, but you can’t let everybody in,” Spoelstra said. “There’s some element of this that this is working and you want a somewhat controlled environment. So we get it. But if that can change at any point, it has my vote.”

Players, coaches and staff members have navigated their loss of family time in different ways. Some have carved out designated times to connect on the phone and through Facetime at either the beginning or end of their day.

“You see a lot of smiles on the players’ faces when they come back to the hotel now,” JaMychal Green said. “Kids tend to do that to you.”