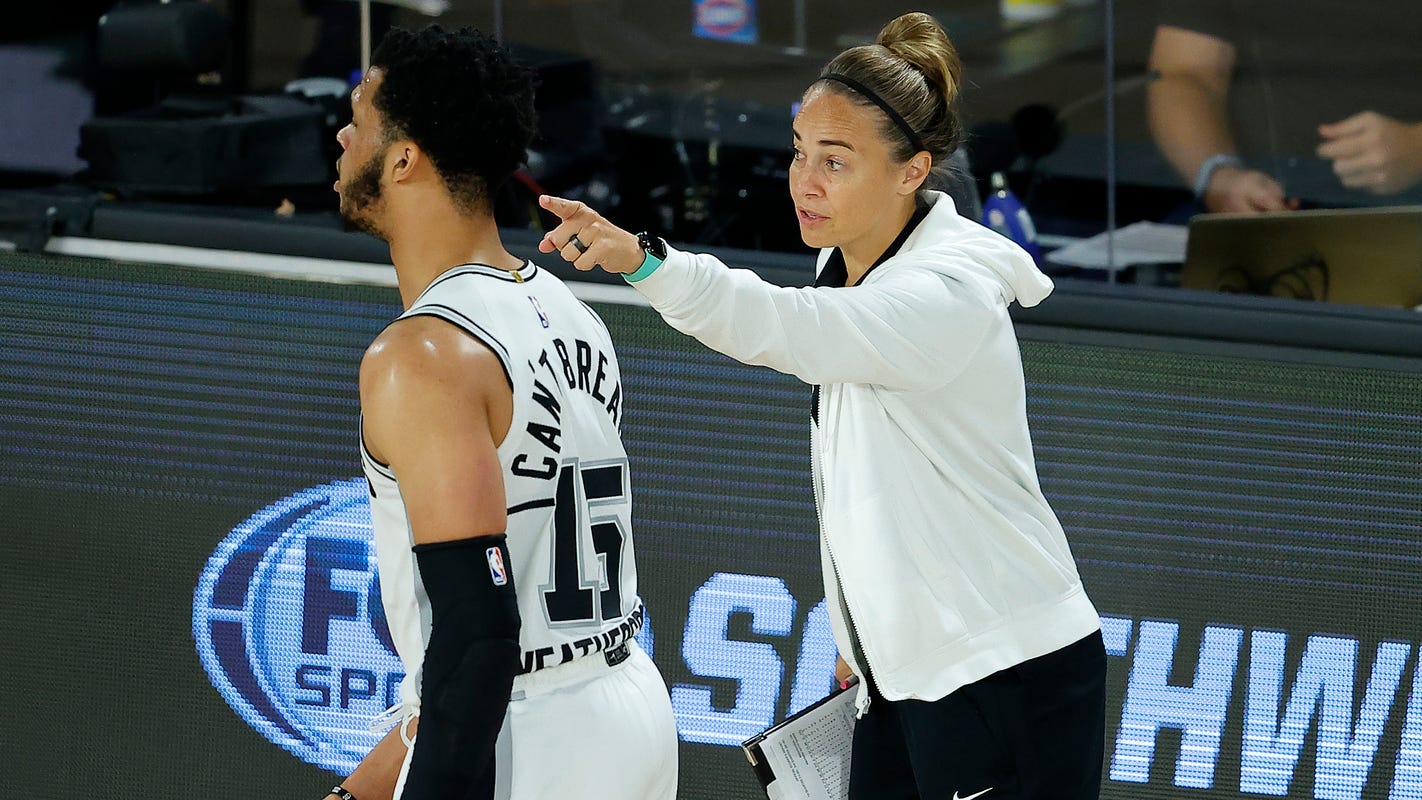 Becky Hammon should be a candidate for Pacers head coach

INDIANAPOLIS – The résumé is almost perfect, but you wonder if the Indiana Pacers would make a hire this daring, this dangerous. You don’t have to wonder about the résumé, though. It’s perfect. Well, almost.

A three-time college All-American, a 16-year pro, the first eight years in New York, the second eight in San Antonio. A six-time All-Star. A gold-medal winner overseas. A future Naismith Hall of Famer.

Then an assistant coach since 2014, all with the San Antonio Spurs, all for Gregg Popovich, the greatest NBA coach of our generation. A head coach in the Las Vegas Summer League. Won the title that year.

A young coach, just 43, a product of the internet age. The résumé checks every box for the Pacers, but you wonder. Because the coach has a name.

And her name is Becky.

This is how it starts, with me getting the greatest basketball coach in Notre Dame history, Muffet McGraw, on the phone. She is four months into retirement after winning 936 games and two national championships, after being inducted into the Naismith Hall of Fame, after becoming a professor — her class: Sports Leadership — in the Mendoza College of Business.

The Pacers are looking for a coach, I’m telling McGraw, and one possible candidate is Spurs assistant Becky Hammon, and …

What did you say?

McGraw doesn’t pretend to know Becky Hammon well, but she knows that résumé. An all-time great college and WNBA player, an international star, seven years under Gregg Popovich. That one.

“I think if you looked at a blind résumé,” she’s saying, “you would see that Becky was imminently qualified to do the job when you compare her — not to some coaches with 30 years’ experience — but to some of the (former NBA) players that get jobs.”

Well there’s no question about that, I’m telling McGraw: Hammon’s résumé is impeccable, and her references are otherworldly. Literally, Gregg Popovich? That’s the best reference in the NBA, but Hammon has more than that. Here are some words from former Spurs center Pau Gasol, an 18-year NBA veteran with almost 21,000 career points:

“Arguing on Coach Hammon’s behalf would feel patronizing,” he wrote in 2018 for The Players’ Tribune. “To me, it would be strange if NBA teams were not interested in her as a head coach.”

Gasol goes on, though, to “knock down a few of the silly arguments and talking points against Hammon’s candidacy — and the larger idea of a woman as an NBA head coach — that I’ve seen floating around,” before making this observation:

That would seem to answer a question I had for Muffet McGraw, when I told her the issue is not whether a woman can handle being an NBA head coach. No, I’m telling McGraw, the question is this: Can NBA players handle being coached by a woman?

“I think that’s a great point,” she says, then politely shoots it down. “When you talk to any female assistant in the NBA, they all felt like guys respected them, and it starts with the head coach of course. He put them in that position, and they knew they had the backing of the head coaches. I don’t hear of anybody having issues.”

Now, McGraw has a question for me.

“Did you see the story out of South Carolina?”

“Dawn Staley said she’d be interested in the Sixers job,” McGraw tells me. “Some people probably read that and said, ‘Dang, she’s got some courage.’ But if a man did that, we wouldn’t blink.”

‘We want to think uniquely’

The first female player to get a guaranteed contract from an NBA team was UCLA All-American Ann Meyers in 1979. The team was the Indiana Pacers.

The first woman hired as an assistant NBA general manager was former Indiana Fever GM Kelly Krauskopf in 2018. The team was the Pacers.

The first woman to run an NBA front office was Nancy Leonard, in 1977, when her husband Slick was the team’s coach. Yes, you know the team.

Point is, the Pacers have a history of thinking outside the box when it comes to women in the NBA. And here’s some commentary from Pacers President Kevin Pritchard, spoken Monday about his search for Nate McMillan’s replacement:

“We could go outside the box,” Pritchard said.

And: “We want to think uniquely.”

And: “I’m not ruling out really anything right now.”

And: “That out-of-the-box thinking is what we desperately need.”

And finally: “I just want to get the best person for the job. Let’s dig deep every day, and let’s keep an open mind. If there’s someone who’s unique … I don’t want to tie myself down. Someone may come in here, talk about how they want to build the program, and blow us away.”

Does this mean he’s hiring Hammon? Of course not. Nor am I saying he should. That’s not the point of this story. Point is: Hammon is a fascinating candidate, and the Pacers have a history of being out in front on this issue.

And the NBA is inching closer to its first female head coach. Eleven women were NBA assistants this past season, including former Notre Dame star Niele Ivey of the Memphis Grizzlies. She’s not there anymore; Notre Dame hired her in April to replace McGraw.

McGraw made headlines in 2019 when she said she was done hiring men on her staff. Her position wasn’t sexist — don’t even think about going there — but about championing women. She sees what is happening in college and high school coaching, and it’s troubling.

Roughly 60% of the women’s teams in NCAA basketball are coached by men. McGraw says that number is higher in high school and even worse in AAU, where she estimates “90% or 95% of those coaches (of girls teams) are men.”

Do men have a place coaching women? For sure. UConn’s Geno Auriemma has won 11 national titles in women’s basketball history, and UNC’s Anson Dorrance has won 21 in women’s soccer.

Meanwhile, very few men’s college teams are coached by women. Former WNBA guard Tamara Moore was hired in April to coach Mesabi Range (Junior) College in Virginia, Minnesota. The University of Tennessee tried several times to get its Hall of Fame women’s coach, Pat Summit, to coach the men’s team. She turned that down.

Muffet McGraw says a Division I school — “not a high major” — contacted her a few years ago about coaching its men’s team. She declined, but not because she doesn’t like the concept of women coaching men. She loves it. If men can coach women, why not the other way around?

“I’d love to see (women coaching men) be more commonplace in the game overall, even lower levels,” she says. “Look at AAU (boys teams) — all men. High school is predominantly all men. Women don’t see that track: ‘Where can I get into it?’ It’s great the NBA is doing a much better job of that than college.”

But this next step … it’s a doozy. A woman coaching an NBA team from the first chair? It has never happened, but the day is coming. Could be a year from now, could be a decade, but it will happen. Will it happen in a few weeks? Will it happen here?

Oh, probably not, but know this: The Pacers have a big list of preliminary candidates — not necessarily interview targets, but names to research — and Hammon is on that list.

Find IndyStar columnist Gregg Doyel on Twitter at @GreggDoyelStar or at www.facebook.com/gregg.doyel.