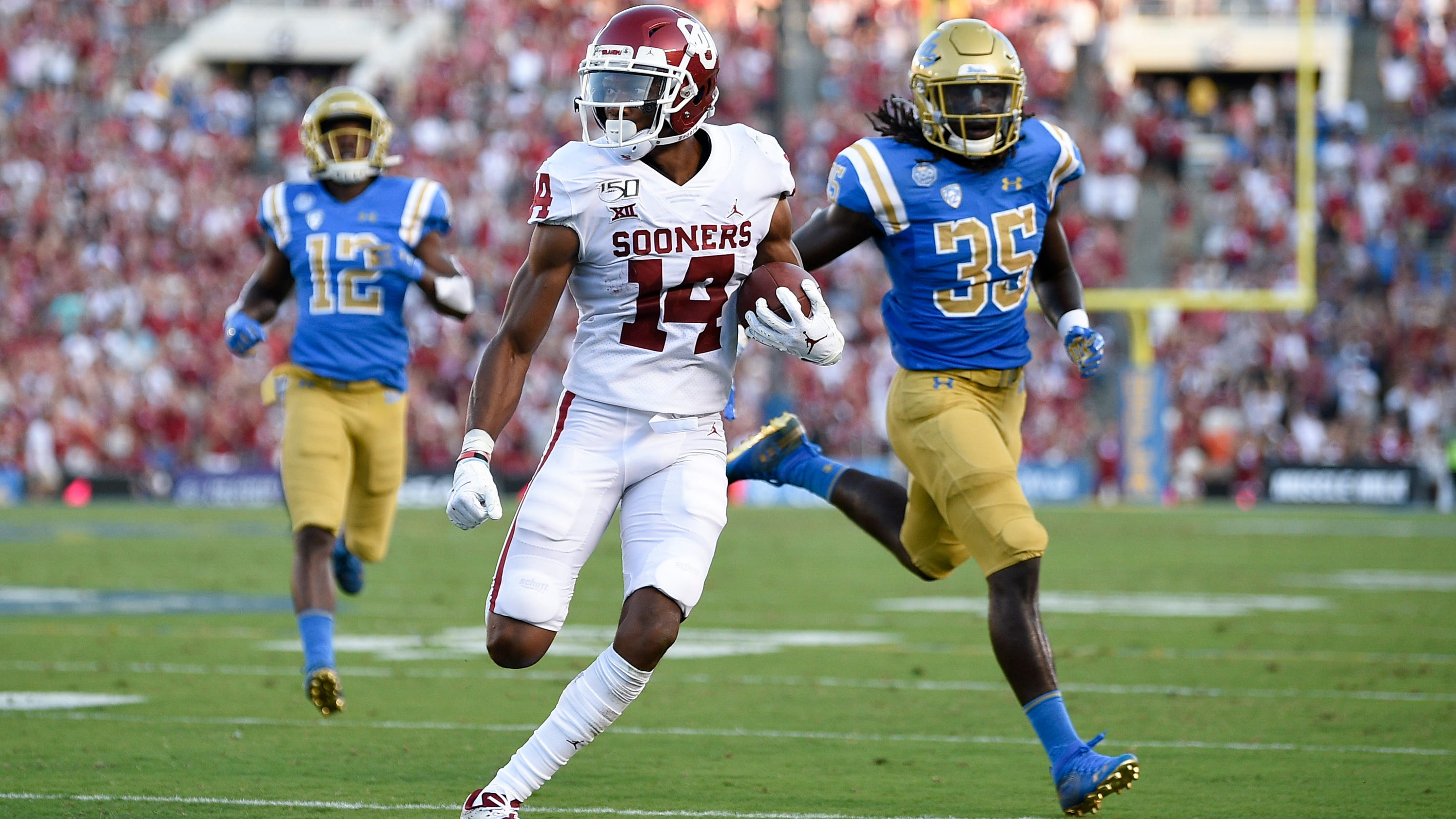 Since adopting its current lineup and round-robin format in 2012, just four Big 12 programs have went into December with fewer than two conference losses: Oklahoma, Kansas State, TCU and Baylor.

The Wildcats and Sooners did it in 2012. TCU in 2014. Baylor in 2013 and 2014. Since the 2015 season, however, just two programs have pulled it off: Baylor last season and the Sooners in each of the past five seasons. (Not coincidentally, 2015 coincides with Lincoln Riley’s arrival in Norman as the offensive coordinator.)

This tells us two things. One, that Oklahoma dominates the Big 12 at a level beyond any other Power Five program does in its conference this side of Clemson — but we knew that already. And when it comes to an abbreviated and mixed-up 2020 season, schedules that feature just one non-conference game will yield a run of Big 12 teams looking up at the Sooners with anywhere from three to six losses.

Oklahoma wide receiver Charleston Rambo breaks free for a touchdown after a catch during the first half against the UCLA. (Photo: Kelvin Kuo, USA TODAY Sports)

The only sure thing is Oklahoma. The Sooners’ offense will have a new quarterback in redshirt freshman Spencer Rattler and have lost running back Kennedy Brooks, who cracked the 1,000-yard mark in each of the past two seasons. Still, an offense that has averaged at least 40 points per game in each of the past five years is expected to stay among the best in the Bowl Subdivision.

Like with the ACC, the Big 12 has a chance to fill the void left by the absence of teams from the Big Ten and Pac-12. The most likely suspects: Texas, which has hired two new coordinators after last year’s disappointment, and Oklahoma State, home to one of the top offensive trios in the country.

Teams will play one non-conference game in addition to the normal games against every other member of the conference. Records do not include conference championship game. (Each team’s overall ranking in the preseason 1-76 ranking is in parentheses.)

To doubt Lincoln Riley’s ability to develop Rattler into his latest Heisman Trophy candidate would be to doubt recent history — all Riley has done at Oklahoma is turn quarterbacks into Heisman winners or contenders. Still, the devil’s advocate argument: Riley has yet to develop a high school prospect of his own, with Baker Mayfield, Kyler Murray and Jalen Hurts all arriving via the transfer route. (The issue with this argument is that Mayfield and Murray came to Oklahoma as second-year players, meaning the vast majority of their development came in Norman.)

Talk to coaches and those in the know around the Big 12 about the Longhorns’ chances under Tom Herman and you’ll get arguments on both ends of the spectrum, with some arguing that Texas is ready to compete for a College Football Playoff berth and others certain that the Herman era will eventually sputter toward a disappointing conclusion. In 2020, it’s easier to make a case for the former than the latter. The Longhorns have a senior quarterback in Sam Ehlinger and are on paper more experienced than at any point during Herman’s tenure.

Texas quarterback Sam Ehlinger runs in for a touchdown against the Utah during the 2019 Alamo Bowl. (Photo: Daniel Dunn, USA TODAY Sports)

The triplets will be worth the price of admission and, say, 40 or so points per game. Running back Chuba Hubbard is one of the top players in the country. Wide receiver Tylan Wallace has averaged more than 110 yards per game across the past two seasons, with his 2019 campaign cut short due to injury. And sophomore quarterback Spencer Sanders was imperfect as a rookie but showed the talent base that makes him a potential breakout star in 2020.

With sophomore quarterback Max Duggan out indefinitely after a recent COVID-19 test revealed a heart abnormality, TCU will first turn to Matthew Downing, who was a walk-on at Georgia and rose to third on the Bulldogs’ depth chart before transferring prior to last season. Downing could be pushed by Stephon Brown, the top junior college quarterback in the recent recruiting cycle.

The schedule has no breathers, unless you count Kansas on Halloween. The Cyclones open with Louisiana-Lafayette, one of best teams from the Group of Five. A road trip to TCU precedes a home game against Oklahoma. Texas Tech is sandwiched between the Sooners and a trip to Oklahoma State. Iowa State takes on Baylor, Texas, Kansas State and West Virginia in November. Quarterback Brock Purdy and tight end Charlie Kolar will look to carry this offense to another successful season.

The rebuilt offensive line — the Wildcats lost a combined 159 career starts — is reason for some concern for a program and offense built around a physical running game that sets a tempo on both sides of the ball. As with every team in one way or another, Kansas State suffers for not having a traditional spring and summer to develop a rhythm within a projected starting five. One clear starter is junior left guard Josh Rivas, whose performance in the 2019 rotation suggests all-conference potential in 2020.

Last season’s running game was pathetic: West Virginia ranked 128th nationally in yards per game, 129th in yards per carry and failed to score on the ground after Oct. 5. The Mountaineers ran for 897 yards as a team, matching Iowa State then-freshman back Breece Hall’s output for the season — which in itself behind 67 other Bowl Subdivision players. Not even coach Neal Brown could scheme around the running game’s deficiencies and the offensive line’s issues from guard to guard.

Building depth will help Texas Tech and second-year coach Matt Wells reverse last year’s trend of wilting in the fourth quarter. The 2019 Red Raiders went 0-4 in games decided by three or fewer points and 0-5 when the margin was within a touchdown in either direction entering the fourth quarter.

The Bears lose most of the key pieces on last year’s defense and lost the ability to spend the spring learning from former LSU defensive coordinator Dave Aranda, the league’s only new head coach. While the offense is reason for optimism, the questions on defense loom large in a conference long on scoring power.

The progress is slow but steady, even if the results won’t yet be completely evident in the win column. What KU should show this season is increased comfort under offensive coordinator Brent Dearmon’s offensive scheme, who took over midway through last season. Dearmon and the Jayhawks need to settle on a quarterback, however.

The preseason all-conference team includes players who have opted out of playing this season due to COVID-19.