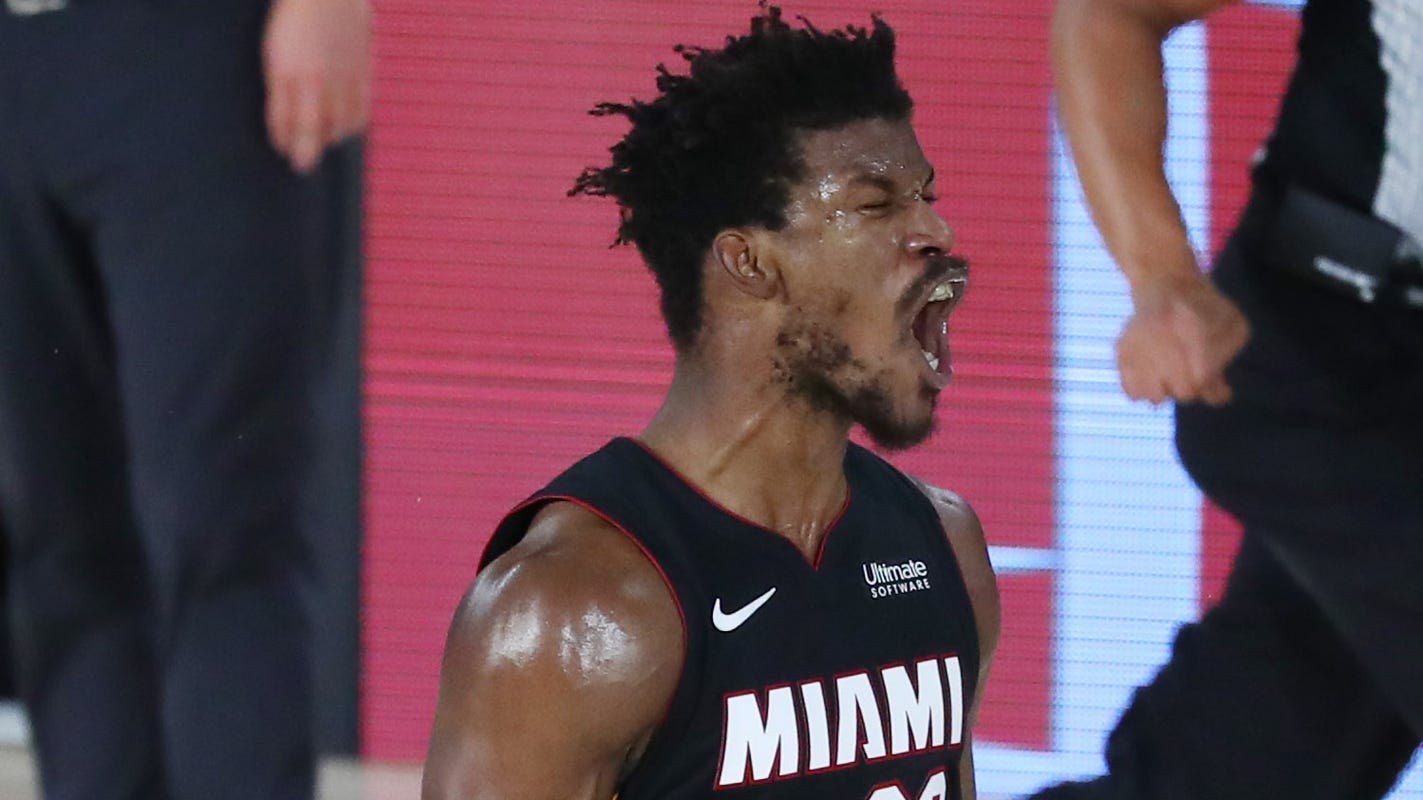 ORLANDO — The Milwaukee Bucks have a Jimmy Butler problem.

They can resolve it in Game 2 against the Miami Heat or maybe they can’t. But no matter how it works out in the best-of-7 Eastern Conference semifinals series, Butler won’t make it easy for Milwaukee to reach the conference finals.

The veteran All-Star showed why the Heat made him their priority in free agency last summer, luring him from Philadelphia.

Butler scored a playoff career-high 40 points, including 15 in a dominating fourth quarter, as the Heat took Game 1 from Milwaukee, 115-104, on Monday.

“It’s a stars league. That’s why we sought him out so aggressively,” Heat coach Erik Spoelstra said. “He just fits everything about us, our fabric, who we are, that’s make or miss. Everybody feels comfortable when he’s making those decisions. He happened to score tonight, but he’s a very unselfish player. It’s not just about him scoring the basketball.”

Butler made important shot after important shot, scoring 10 consecutive points during one stretch of the third quarter. In the fourth, he took over.

“Obviously,” Spoelstra said, “he wants these kinds of moments.”

“Say what you will, but I told my teammates I probably wasn’t going to pass the ball,” Butler said, with no hint of humor. “I made a couple of shots, and they said, ‘That’s fine with me.’ ”

Jimmy Butler celebrates after making one of his 13 field goals. He finished with 40 points. (Photo: Kim Klement, USA TODAY Sports)

His next make, a 16-foot jumper, gave Miami a 111-101 lead, another floater made it 113-104 and when Milwaukee still had room for a miracle, Butler stole the ball and made two foul shots. He also had two rebounds and a blocked shot in the fourth.

“It’s not about just scoring,” Butler said. “It’s about guarding. It’s about making the right play. Getting a 50-50 ball. That’s all part of winning the game. I felt like I took it up a level in the fourth quarter. If that needs to happen every game, I’ve got to be able to do it. But we’ve got so many guys who are capable of doing it for us.”

Butler has been a perfect fit in Miami, where hard work, teamwork and discipline create a winning culture – a culture that’s not for everyone, and why the Heat are often so deliberate in roster-building.

Heat president Pat Riley helped get Butler to Miami. The front-office spotted other important players. Bam Adebayo finished second for Most Improved. Goran Dragic, who had 27 points and has scored at least 20 in every playoff game, is a Sixth Man of the Year candidate, proving Luka Doncic isn’t the only Slovenian star in the NBA. Tyler Herro and Kendrick Nunn are contributing as rookies, and Duncan Robinson is one of the league’s best three-point shooters. Miami acquired Andre Iguodala at the February trade deadline.

“Every day we go about it is so professional,” Butler said. “We play to win. We don’t take any of this for granted, and we’re a really good team. … We work so hard. We practice like we’re supposed to practice. We study film the way we’re supposed to do that. That’s what we bank on every second of every game. There’s no nerves in this because we’re so confident. Every single day we’re working to be great.”

The Heat are even getting an assist from former player Dwyane Wade. “It’s great to have D-Wade in my corner,” Butler said. “I’m telling you, D-Wade’s always in my phone, telling me about the game, what to look for. He’s been a huge help. He’s the first person that texts me when I get back to the locker room. I’m learning. I will continue to learn. I can’t say it enough.”

Hello everyone. If you haven’t met Playoff Jimmy. You’re welcome!

The Heat’s game plan on this series is straightforward. Limit Giannis Antetokounmpo. Don’t let Milwaukee dominate in the paint. Defend. Make some threes and share the basketball.

Antetokounmpo had a quiet near-triple-double with 18 points, 10 rebounds and nine assists. The Bucks were outscored 42-24 in the paint, Miami made 12 threes and outscored Milwaukee 25-14 at the foul line. That, plus Butler, were enough.

In a sterile environment without fans, Butler is finding motivation within. It’s not easy in the bubble with the physical and mental requirements even more pronounced.

“I love to hoop,” Butler said. “I love to go to war with this group of guys that we have. Coach Pat and Spo do a great job of putting some dogs on the floor who just want to compete.”