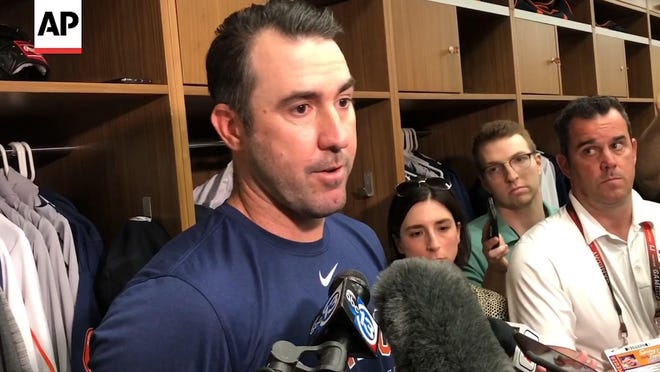 Ex-Astro J.D. Davis ‘ashamed’ for role in the sign-stealing scandal

Not by the end of spring training.

Perhaps not the entire season.

It was Day 3 of spring training Friday, and a day after the Houston Astros’ apologies, there were two players in the New York Mets’ camp, Jake Marisnick and J.D. Davis, having press conferences to express remorse for their actions.

In Phoenix, Arizona, MVP Cody Bellinger of the Los Angeles Dodgers was blasting away at the Astros, saying they were cheated out of a World Series title.

In West Palm, Beach, Florida, Washington Nationals GM Mike Rizzo lashed out at the Astros, saying he wants them to actually say they cheated.

It’s the story that continues to dominate the sporting landscape with no end in sight.

“Of course, it’s regrettable, Davis said, who was a rookie on the 2017 Astros’ team. “I feel ashamed to be a part of it. It’s terrible for baseball.’’

Said Marisnick: “I feel terrible about it. You definitely knew something was going too far. Lines were definitely crossed. This is a bad deal for baseball. I feel bad about it.’’

Their apologies, particularly by Marisnick, came across as sincere. Marisnick, traded to the Mets during the winter, appeared emotional when speaking to a room full of reporters. Davis spoke earlier in the day in front of his locker, and said he may have been intimidated as a rookie to speak up.

Yet, neither made excuses, either.

Marisnick was only a part-time player, battling for playing time, but said it’s unfair to blame veteran Carlos Beltran or anyone else for the cheating scheme.

Marisnick could have still spoken up.

And will always regret it.

Now, they will have the embarrassment of having the stigma attached to them for the rest of their careers, almost ashamed to wear their World Series rings, while being ostracized by their peers.

Bellinger, whose team lost to the Astros in the 2017 World Series, lashed out against the Astros and MLB Commissioner Rob Manfred, saying he never should have granted immunity to the players for their testimony.

“I thought the apologies were whatever,” Bellinger told reporters in the Dodgers’ camp. “I thought (Astros owner) Jim Crane’s was weak. I thought Manfred’s punishment was weak. Those guys were cheating for three years.

“I think what people don’t realize is (Jose) Altuve stole an MVP from (Yankees slugger Aaron) Judge in ’17. Everyone knows they stole the ring from us. But it’s over.”

It’s never going to be over.

The ridicule will never completely end.

The best hope for the Astros is if MLB investigates other teams and uncovers widespread cheating throughout the game, with other teams using live computer feeds to relay signals to their hitters.

Yet, until that day arrives, the Astros will be the poster boys of cheating.

MARWIN GONZALEZ: ‘Wish we could take it back’

“You hear things about other teams, and all of these crazy stories,’’ Mets pitcher Michael Wacha says, “but you don’t know. I worked out with guys in Fort Worth during the winter, we talked about it when all of the allegations and stuff were coming out. We asked what their teams were doing, and everyone said, ‘No, we don’t do anything like that.’

“You know they’re not the only ones, but no one wants to tell their secrets.’’

Maybe the Astros players will have to say they don’t deserve to be known as the 2017 World Series champions.

Maybe they’ll have to spill their guts, divulging the ugly details one day, but for now, the verbal assaults will keep coming, pummeling away at the Astros’ soul.

“It’s terrible for baseball,’’ Davis said. “Baseball took a couple of steps backwards because of these events. Anybody that gets crowned World Series champion, it’s not only a big deal, but it’s a big deal to the baseball world.

“To have the incident is very unfortunate for baseball.’’

Really, it’s a nightmare for those who want to believe the sport is pure, as if no player is using performance-enhancing drugs, as if no front-office executive tampers in discussions with agents, and if no team employee is divulging secrets to get paid by gamblers.

It will be a long time before the Astros are trusted again.

And it may be even longer for those players to be forgiven.

It doesn’t really matter that no player was suspended, fined, or even disciplined.

The most painful punishment of all is the respect they may never regain for the rest of their careers.

“There’s a lot of people that were angry over this,’’ Marisnick said. “It’s going to take time. It’s definitely something that’s not going to go away lightly, you know. …

“I think at the end of the day, this will be good for baseball. Baseball will be in a better place.’’