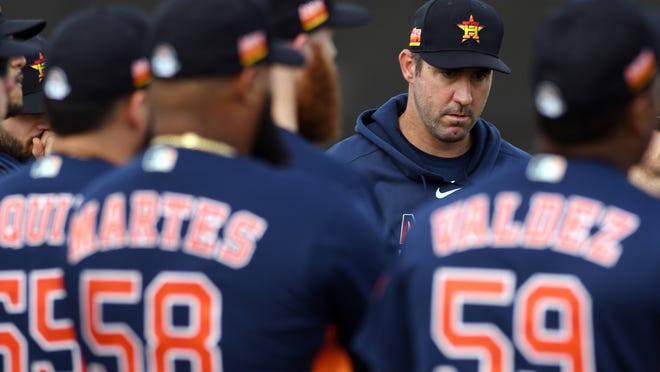 
WEST PALM BEACH, Fla. – On one side of the sprawling FITTEAM Ballpark complex that houses the Houston Astros and Washington Nationals, a certain word was avoided as if it were poison, the Astros not wanting their 2017 World Series title to be any further tainted.

On the complex’s southern end, where the glow from the Nationals’ 2019 World Series championship has dulled in the shadow of the Astros’ scandal, it was tossed about liberally.

When the Astros apologized en masse Thursday for their electronic sign-stealing during the 2017 season, owner Jim Crane could not be baited into saying the word. Of the eight players who took their medicine and met the media for mea culpas, only shortstop Carlos Correa – “I don’t want my kids, I don’t want my brother, I don’t want my family members, the people that follow me, to think that that was right, to cheat” – was so candid.

By Friday, the Nationals had time to take stock of the Astros’ apology session, and from a unique perspective. They were warned by peers and opponents they vanquished just how slippery the Astros were, and thus turned the paranoia into productivity, designing an elaborate system of signs between pitcher and catcher to throw the Astros off their tail.

It worked: The Nationals stunned the baseball world by winning all four World Series games at Minute Maid Park, where the trash cans banged and the hits rained down on the Los Angeles Dodgers in the 2017 World Series.

In 2019, Max Scherzer and Stephen Strasburg proved indomitable in Games 1 and 2 and 6 and 7. And now, after the Astros’ scandal pushed their victory lap into an afterthought, they’re plenty salty about it.

“I think it’s disappointing that that becomes the talk of the off-season,” Strasburg said Friday after throwing his first bullpen session of spring training. “But in a way, that’s probably a good thing – because I think it upsets a lot of us in the clubhouse, because we did something really special and that gets overshadowed because some guys were cheating.

“That’s something they’ve got to live with, not something I’d ever do, because I think who you are as a person, and how you play this game and go about it is so much more important than what’s on the back of your baseball card.”

ROUGH DAY: Astros apologize to everybody – and nobody – at the same time

In his first spring training press conference, Nationals general manager Mike Rizzo was annoyed by both the Astros’ largely vague apologies – he wasn’t privy to all Correa’s comments – as well as the massive media presence the Astros drew – coming off a season in which they lost the World Series.

“We keep skirting around the word. And they cheated,” Rizzo said. “They were found guilty of it and I haven’t heard it yet.”

Rizzo and the Nationals will have to take solace in the fact that they were the team all their peers wanted to win the World Series. Executives, scouts and players alike – their phones buzzed with words of advice on how to avoid the pitfalls of the cheating Astros.

Houston claims it did not cheat during the 2019 season, during which Major League Baseball had more stringent safeguards against accessing video rooms. It’s clear many throughout the industry don’t believe that.

“The league is a lot smaller than you think,” says Strasburg. “You play with guys on other teams, it’s a tight-knit community and we just want it to be fair and go out and compete on a level playing field.

“You go into this bout of paranoia a bit, but we had this good program going in; it was virtually impossible, it was nothing they saw before and we kept it close to the chest.”

With their catchers sporting wristbands with reams of info, as if they were NFL quarterbacks, the Nationals slept better during the Series than many Astros opponents of the past.

And in winning a World Series in, by all accounts, an ethical manner, they’ll presumably rest easier when their playing days are done.

“We are all going to be retired, ex-Major League Baseball players a lot longer than we actually are (players),” says Strasburg. “Someday, I’m hopefully going to have some grandkids and be able to sit down and talk to them about the experience of the World Series, and not really feel ashamed of it at all.