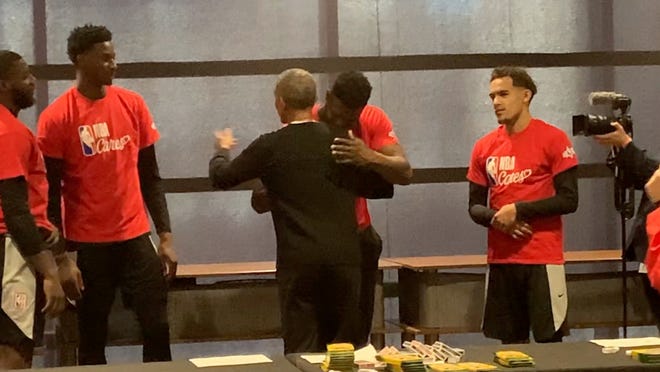 
CHICAGO – The Pelicans’ Zion Williamson called it a top-two moment in his life. The Hawks’ Trae Young was mesmerized that the man standing next to him filling backpacks with school supplies knew about his game.

As part of NBA All-Star weekend, Obama made an appearance Friday at an NBA Cares event to assist City Year Chicago, which helps students develop the skills and mindsets to contribute to strong communities.

Obama walked around the room, shaking hands with volunteers and players, then stood between Williamson and Young, talking as they filled backpacks.

“He basically knew everything about my season, my game, everything. For him to know all that, it was pretty cool,” Young said. “He (said he) just loves watching me. He watches me all the time, telling me it’s going to turn for the Hawks. It’s special when you meet an icon like that, someone you look up to.”

Williamson wasn’t sure whether meeting Obama was the top moment of his life.

Obama has kept tabs on Williamson’s season, too.

“He was talking about recent games,” Williamson said. ‘You’re keeping up with me? I’m 19. You’ve got superstars you can keep up with it.’ It was crazy.

“He said I’ve been playing great. I just kind of zoned out after that; I was like, ‘That’s all I needed to hear.’ “