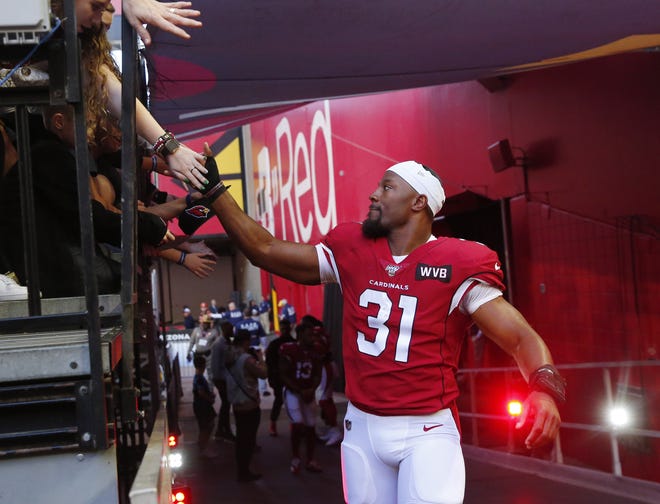 Cutting David Johnson ‘not an option’


The Cardinals have no plans to release running back David Johnson, they’re optimistic they will re-sign free-agent left tackle D.J. Humphries to a multi-year deal and they’ve already had preliminary conversations with cornerback Patrick Peterson about a contract extension as well.

Those were just some of the insights offered by General Manger Steve Keim during his interview Friday morning with Arizona Sports 98.7-FM on the “Doug and Wolf Show.”

Keim also discussed the benefits of building through the draft rather than free agency, his thoughts on some of this year’s top prospects and the development of quarterback Kyler Murray.

But the biggest nugget might have been his take on Johnson, the six-year veteran who already is guaranteed $10.2 million in 2020 with a roster bonus of $956,250. Keeping him on the roster carries a $14,156,250 salary cap hit. Releasing him would cost the Cardinals $16.2 million in dead-cap money.

Johnson lost his starting role around mid-season last year following injuries to his back and ankle. He barely played at all following Arizona’s acquisition of running back Kenyan Drake in a trade from the Dolphins. Keim, however, said the team isn’t giving up on Johnson.

“I still have a lot of faith in David,” Keim said. “He’s got tremendous skills. He’s a great person. He works extremely hard. I think it was one of those things that when you look at the big picture, Chase (Edmonds) got hurt, David got hurt, we made the trade and then Kenyan came in and he got the hot hand.

“In any sport, I think you see guys have success and the way coaches are wired, the way you’re wired to want to win and do well offensively, you go with the hot hand and that’s what happened last year.”

Drake averaged 5.2 yards per carry during his eight games with the Cardinals, rushing for a team-high 643 yards and eight touchdowns on 123 attempts. He is presently an unrestricted free agent, who can openly test the market in March should the Cardinals not strike a new deal with him before then.

Drake has said he is open to returning to the team, but that he wouldn’t limit his options. Keim wouldn’t say where the team is with Drake regarding contract negotiations other than to confirm the two sides have had conversations.

“I don’t want to get into details,” Keim said, “but we have had talks with Kenyan and I made it clear that we would like to have him back.”

But if the Cardinals can work out a new deal with Drake, who would then project as the No.1 running back in 2020, how could they justify keeping Johnson on the roster as such an expensive backup? Well, because it would cost them less to keep him than it would to cut him.

“Cutting him is not an option,” Keim said. “It’s not only the cap hit, but you’re still paying the cash as well. So it wouldn’t be responsible for me or the organization to do that. If David Johnson isn’t the starter, he still has a significant role. The guy still creates big-time mismatches in the passing game. He still brings kick-return ability. There’s a number of things.

“You can’t just have one back. You have to have a platoon of backs. We’ve seen that. So there’s enough carries to go around to have multiple players.”

The Cardinals could part with Johnson through a trade, although his salary would make that difficult and Arizona would have to eat most of the money. Again, however, Keim didn’t sound like the team has much interest in moving on from Johnson.

“We have a lot of faith in David and think he can continue to play well and go back to what he did in 2016,” Keim said. “The guy has great skill. And a lot of times when people fail, I think you look back and you say, ‘Well, you know, he didn’t work hard enough. He wasn’t a good guy. He wasn’t committed to it.’ None of that applies to David.”

As for Humphries, he is set to hit free agency but Keim indicated it’s probably unlikely the Cardinals will let him get away after he started and finished all 16 games this past season for the first time in his five years with the club.

“I would just say that I’m very optimistic that D.J. will return,” Keim said. “Really proud of not only the way he played, but sort of his maturation, the way he’s progressed. … He’s always loved to play. He’s always been passionate and played hard. … I think he played his best ball at the right time.”

Keim said he and his staff have evaluated all the possible free-agent tackles that will become available next month and that the consensus is that, “We all feel very confident that D.J. Humphries has grown into one of the better tackles in the National Football League.”

Although the team could retain Humphries simply by designating him with the franchise or transition tag, Keim said that remains an option, but that, “You always want to tie up your players that you feel good about and you want to come to an agreement moving forward to a longer-term deal than having to use those things.”

To re-sign Humphries, it likely will cost the Cardinals an average of $14 million per year.

Peterson, meanwhile, is under contract for 2020 but then is set to hit free agency. A contract extension with him has also been discussed, Keim said, adding, “We’d love to see him retire a Cardinal.”

Other highlights from Keim’s interview with Arizona Sports on Friday included:

— Former Auburn defensive tackle Derrick Brown, who is rated as a Top 10 prospect in this year’s draft: “Derrick Brown is a good player. Talked to him at the Senior Bowl. … He’s extremely mature, he’s dominant. Saw him play live against LSU. His ability to take over and control the middle is exceptional. Can create pressure from the defensive line position, which is obviously a plus. Can hold the point, can do all those things. So he’s a fun player to watch.”

— On the top two-rated wide receivers in the draft, Alabama’s Jerry Jeudy and Oklahoma’s CeeDee Lamb: “You watch CeeDee Lamb and there are some things that come to mind when I watch him that remind me of a DeAndre Hopkins. … And then you’ve got Jerry Jeudy, who is so smooth and accelerates in and out of breaks and is sort of like a Gumby doll – he’s got no stiffness. They’re both great players. I think they’re going to have exceptional careers.”

— On Murray, who was named the NFL’s Offensive Rookie of the Year after passing for 3,700 yards and 20 touchdown and rushing for 544 yards and four touchdowns: “When you look at how much he improved our offense, the guy who made the biggest impact for their respective team, to me it was easy to see, it was Kyler. You look at the offensive stats and the improvement we made from one year to the next, obviously Kyler was a big reason for that.”