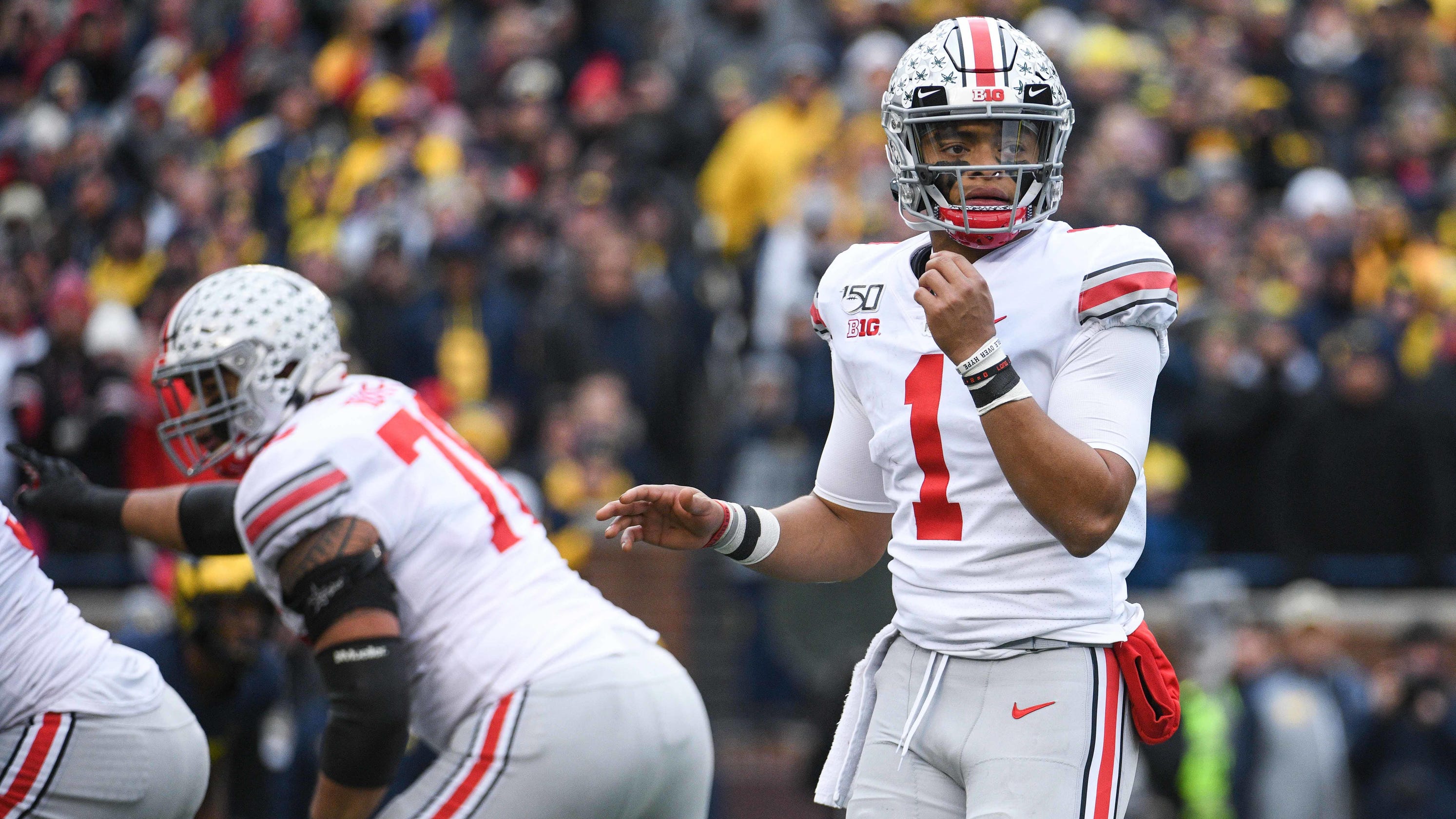 SportsPulse: We connected with NBA and NFL broadcaster Ian Eagle to see how he thinks NFL games will look on tv this fall amidst the pandemic. He also believes the NFL can learn a thing or two from how the NBA has come back.

The 2020 NFL draft was an unprecedented event in the league’s century-long history, the entire process basically conducted from a virtual standpoint once the COVID-19 pandemic exploded shortly after the completion of this year’s scouting combine.

And yet, with 40% of college football’s Power Five conferences already deciding not to play this fall – and the SEC, ACC and/or Big 12 could follow the leads of the Big Ten and Pac-12 in the near future – the 2021 draft seems likely to be seismically unique in its own right.

A few things to consider that might distinguish the 2021 draft from its predecessors:

It’s currently scheduled to run from April 29 through May 1 next year in Cleveland. But the league’s new CBA allows for the “Annual Selection Meeting” to be conducted as late as June 2, per the discretion of the commissioner. It could be a consideration if some college conferences actually attempt to play in the early part of 2021, however the NFL Players Association would have to sign off for the draft to be pushed beyond June 2.

How are 2021 draft-eligible players affected?

Top 10-caliber prospects like Penn State linebacker Micah Parsons and Minnesota wide receiver Rashod Bateman had already opted out of the 2020 season in order to focus on draft preparation even before their conference did so collectively Tuesday. With the Big Ten and Pac-12 off the autumn docket, other superstars – quarterback Justin Fields and cornerback Shaun Wade of Ohio State and Oregon offensive lineman Penei Sewell among them – also find themselves sidelined.

Ohio State Buckeyes quarterback Justin Fields is already a top prospect for the 2021 NFL draft, but he has only played one year as a starter. (Photo: Tim Fuller, USA TODAY Sports)

Prospects of their stature almost surely wouldn’t incur the risks of participating in prospective spring seasons, having very little to gain – and way too much to lose –compared to peers who had been biding their time for a starting opportunity or were perhaps on the verge of an unforeseen breakout. Such developmental leaps for lesser-known players so often mean the difference between eight-figure guarantees and mid-round compensation – or even what determines an NFL opportunity and forced entry into the job market outside of football.

“I cannot imagine being in this particular predicament as a senior if you haven’t already established yourself as a potential first-round draft pick or a high-round draft pick, and you put the offseason work in and try to give yourself the best opportunities to jump the board,” former Dallas Cowboys first-rounder Marcus Spears and current ESPN NFL analyst Marcus Spears told USA TODAY Sports.

“Joe Burrow may have been a free agent before this past season. He may have been a sixth- or seventh-round pick. You go from that to being the first pick of the draft, that can happen. We just saw it happen.”

Baker Mayfield, Kyler Murray and Burrow were the No. 1 picks of the past three drafts, but good luck finding anyone who projected that a year ahead of time for any of them.

I feel for all college athletes right now. I hope their voices are heard by the decision makers. If this happened a year ago I may be looking for a job right now.

The college talent pool is replenished annually, but finding its waterline obviously requires determining how so many newly elevated players perform. That’s likely going to be a much more significant challenge as it pertains to scouting the Big Ten and Pac-12, which had more players drafted in 2020 – 48 and 32, respectively – than any other conference aside from the SEC (63). The Mountain West and MAC previously announced they wouldn’t be playing football this fall, either, as has nearly every Football Championship Subdivision conference.

Not only could the draft slide back on the calendar, the combine – normally held at the end of February – might also be impacted if some conferences try spring football.

Dan Orlovsky, a fifth-rounder in 2005 and longtime backup quarterback, suggests the league should allow more visits to team facilities for draftable players – the limit is typically 30, though the league didn’t allow for any this spring amid COVID-19 concerns – maybe up to 50 in 2021, pandemic permitting.

Regardless, the league’s 32 scouting departments are likely to bear the brunt of creatively assessing players who may not have been on the field for a meaningful snap in more than a year. The knowledge and sources of area scouts should be especially vital, especially as it pertains to finding small-school diamonds in the rough at a time when everyone will be playing catch-up to some degree on depth charts of the traditional football factories.

“There is going to be a challenge tied to this for the NFL scouts and GMs, absolutely,” Orlovsky, now an ESPN analyst, told USA TODAY Sports.

How will GMs adjust?

This could be the most fascinating ramification, whether the 2020 college season is partially or fully wiped out by the coronavirus.

It won’t take a scouting savant to place Fields or Parsons – or Clemson quarterback Trevor Lawrence, LSU receiver Ja’Marr Chase or Alabama corner Patrick Surtain II, whether they play or not – atop next year’s draft boards. But for a process steeped in projections and speculation in a normal year, differentiating the bulk of the players in 2021 should be especially difficult.

And might the increased number of variables influence how personnel decision makers regard next year’s draft pool and the value of its selections?

The New York Jets are one fascinating case study. Just last month, general manager Joe Douglas dealt All-Pro safety Jamal Adams to the Seattle Seahawks for a package that included two first-round picks. The Jets joined the Miami Dolphins and Jacksonville Jaguars as teams that now own multiple Round 1 picks in 2021.

But viewing the trade in hindsight now engenders a compelling debate regarding the lens you view it through now. Are Douglas and his team in a worse position after offloading a proven young player for picks at a time when the draft could be a bigger crapshoot than ever? Or are teams like the Jets, Jags and Fins – all in the midst of ongoing rebuilds – advantageously positioned, able to get multiple cracks at better-known commodities atop the board or maybe empowered to extract future premiums from clubs targeting such players?

“There will be challenges,” acknowledged Orlovsky. “But there’s definitely ways when you’re good at what you do, this should not have tremendous impact on what you’re going to do. Joe Douglas will be fine with how he drafts.”

And yet it’s worth wondering if the uncertainty that will almost inevitably be attached to the 2021 draft sparks a more active trade market. Would you rather draft and develop a player next year in the latter part of the second round or somewhere in the third? Or instead invest that level of draft capital now to acquire a known veteran like Yannick Ngakoue, the disgruntled Jacksonville pass rusher who will play 2020 on the franchise tag? Will teams be more willing to pay through the nose before the trade deadline for, say, Jaguars running back Leonard Fournette or Chargers receiver Keenan Allen, both on the cusp of free agency?

Such considerations could come at a time when the value of picks could also be altered. Typically the trade of a pick in the upcoming draft returns one of higher value the subsequent year – a 2021 third-rounder netting a 2022 second-rounder, for example. But the uncertainty that could pervade the 2021 draft might simultaneously inflate the value of Round 1 choices but perhaps dilute picks in Days 2 and 3. Great potential for a revised calculus to replace the draft trade chart that has typically been a guidepost.

Could the XFL be a factor?

The temporarily resurrected spring football league – its original version appeared for one season in 2001 – was shuttered in April, forced by the pandemic to shut down after five weeks. However a group headlined by actor Dwayne Johnson purchased the league in bankruptcy court earlier this month for $15 million.

Details for the XFL’s next reboot are currently scant, and there’s no timeline for a return. However if Johnson and Co. can bring it back with expedience, it might conceivably serve as a vehicle for college prospects unable to play in 2020 to showcase their skills ahead of next year’s draft. (Former West Virginia safety Kenny Robinson, who was kicked out of school for academic violations and didn’t play in 2019, wound up suiting for the XFL’s St. Louis BattleHawks this year and was subsequently obtained in the fifth round by the Carolina Panthers.)

Imagine if Fields and Bateman teamed up on an XFL field for a few months and made a little money for their trouble. Admittedly, unlikely for such highly regarded players … but perhaps a desirable forum for mid- and late-round prospects seeking a platform to boost their stock.