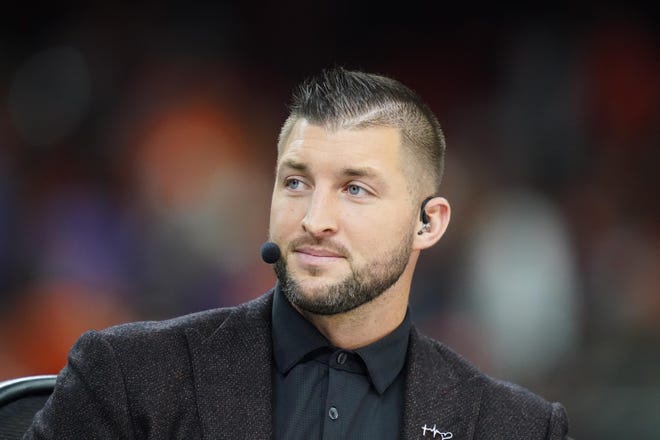 The New York Mets’ minor leaguer was in Cape Town, South Africa for his wedding with Demi-Leigh Nel-Peters three weeks ago. Then he went to the South Asian island of Maldives. Last week, his charity tour brought him overseas to Paris and Rome, where he met Pope Francis. Finally, Tebow was back to the states at a Florida wedding for former coach Urban Meyer’s daughter, Gigi.

The former Heisman Trophy winner and NFL quarterback-turned baseball outfielder will report to spring training next week in Port St. Lucie, Florida. He isn’t giving up on his baseball dream.

“I want to be remembered for being someone who goes after what he believes in,” Tebow told USA TODAY Sports.. “Someone who isn’t afraid to show what’s on their heart.”

That’s what made Tebow so moved by the legacy basketball star Kobe Bryant left behind. Bryant, his 13-year-old daughter Gianna and seven others were killed in a helicopter accident Jan. 26, leaving the sports community mourning.

“I didn’t get a chance to know Kobe very well, but there were some parts of his mentality in sports and life I really admired and tried to take with me,” Tebow said. “To me, he had an unflinching drive and focus I only can compare to Tiger Woods or Michael Jordan.

“When you do something you love, you don’t want to live your life going haphazard. Kobe didn’t know what that was, and I try to relate to that.”

Tebow talked to USA TODAY Sports for a wide-ranging interview on his Keto diet to promote the 2020 Keto 30 Challenge for KetoLogic.

Among other topics discussed:

► Tebow said he had to be at Gigi Meyer’s wedding Feb. 8 because his former Florida coach and wife and kids have become like a “second family.”

Tebow said Meyer, a national NCAA champion coach with the Gators and Ohio State Buckeyes, would make for a great fit in the NFL. Meyer found himself in the head coaching rumor mill in December and January, but ultimately has remained as a football analyst for Fox Sports.

“We’ve talked about coaching (in the NFL) many times,” said Tebow, who is also a college football analyst for ESPN and the SEC Network. “Listen, he would do a great job, he’s very driven and knows the game. But as his friend who loves him, I just try to be supportive. If it’s something he eventually wants to do, I support it. But I also know that he’s pretty good at being a dad and grandpa right now.”

► In September, when the California Senate passed a bill allowing student-athletes to make money off of their name, image and likeness, Tebow’s strong stance on ESPN suggesting athletes receiving pay could affect “what’s special about college football” was met with strong pushback.

Tebow said he felt as if his initial stance was misinterpreted.

“I feel like where I was coming from, it was taken a little bit out of context,” Tebow said. “The bigger point I was trying to make is that the state of NCAA athletics is not just about the money. It won’t solve the whole problem. Now, obviously, something is missing when we know NFL players go broke very soon after their careers. There has to be a better way to take care of them financially and for them to buy a nice pair of shoes and go on a date during college. That absolutely needs to be a part of it.

“My point, though, holistically, is to help every single athlete and not just a percentage of them like the quarterback or the running back. I’m not saying they don’t deserve it, but I’d love to find a way where everyone can be compensated or taken care of. That’s what the importance of the student-athlete is about. I would have been one of those percentages, I’m aware of that. But I’m trying to look out for everyone — the linemen, every last player.”