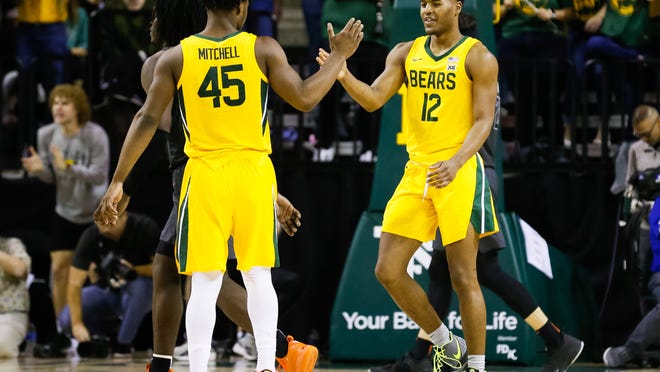 Projecting the field of 68 teams


Kansas may trail Baylor in the Big 12 Conference race. But the Jayhawks’ NCAA tournament résumé keeps getting prettier to the point where one loss for the Bears would position them for the top overall No. 1 seed.

Kansas (21-3, 10-1) won their ninth in a row and added yet another Quadrant 1 win to their tourney portfolio by defeating West Virginia on the road in Morgantown. WVU (18-6) is a projected No. 3 seed and the win gives Kansas a nation-leading 11 Quad 1 victories.

Kansas, in addition to two defeats of the Mountaineers, has victories against Dayton, Colorado, Tennessee and Texas Tech. Its only three losses — Duke, Villanova, Baylor — all came against top-30 opponents.

A Feb. 22 rematch against Baylor will give coach Bill Self’s team an opportunity to show the committee its merit to be the top team on the bracket come Selection Sunday in a month.

Note:  Mostly all statistical data is used from WarrenNolan.com. The NCAA’s NET rankings are also a reference point.

About our bracketologist: Shelby Mast has been projecting the field since 2005 on his website, Bracket W.A.G. He joined USA TODAY in 2014. In his seventh season as our national bracketologist, Mast has finished as one of the top three bracketologists in the past six March Madnesses. He’s also predicted for The Indianapolis Star, collegeinsider.com and is an inaugural member of the Super 10 Selection Committee. Follow him on Twitter @BracketWag.