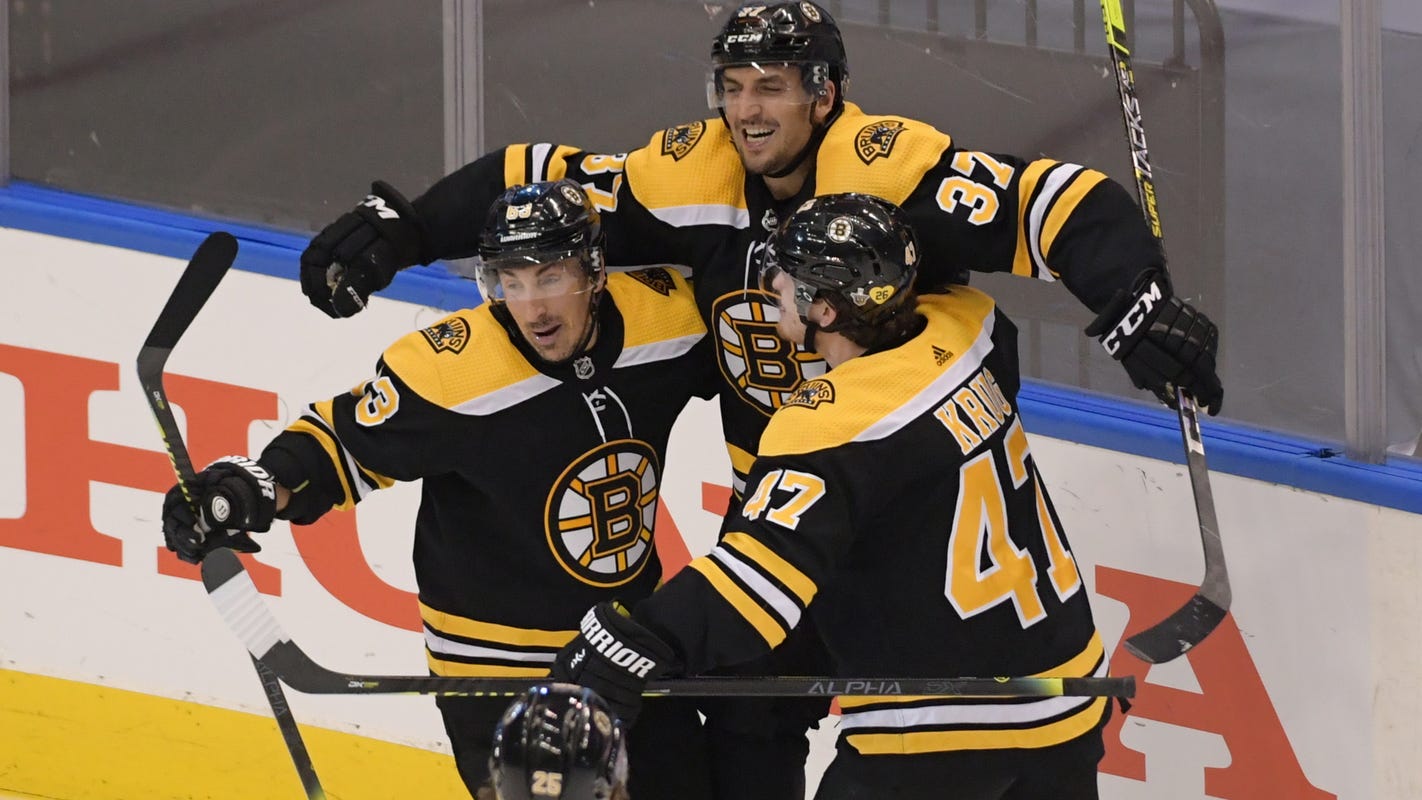 Doctors didn’t know if Carson would ever walk again after a car accident, but this 16-year-old hockey player is determined to get back on the ice.

Maybe it was the extra 15 hours they got to prepare. Or maybe it was that the game was extended by an extra period, plus another 73 seconds.

Whatever the reason, Brad Marchand, Patrice Bergeron and David Pastrnak always believed they would find their game over time, and that time came on Wednesday.

Virtually silent through a winless three-game round robin tournament that preceded Round 1 of the playoffs, the Bruins’ top line came to life with a pair of goals in a 4-3, Game 1 victory against the Hurricanes, highlighted by Bergeron’s winner at 1:13 of the second overtime period.

“We’re a confident group, confident line,” said Bergeron, who also helped set up Pastrnak for a first-period goal. “We had to put whatever was behind us in the past, and get some rhythm going.”

QUEST FOR THE STANLEY CUP: Scores, schedules inside the bubble

Besides the round robin, in which Bergeron (one assist) was the only person on the line with a point, the Bruins had to shake off the bizarre events of Tuesday night, which was when they were supposed to play Game 1. Tuesday’s “early” game at Scotiabank Arena in Toronto, however, took 7 ½ periods and more than six hours to complete, so the B’s and ’Canes were sent home and told to report back for an 11 a.m. start on Wednesday.

The Bruins wore the early start relatively well. While they failed for the fourth consecutive game to score first, they did register a first-period goal for the first time (it was still morning when Pastrnak converted Marchand’s cross-crease feed) and held two leads — another first since resuming a season interrupted in March by the COVID-19 pandemic.

Not that it was a perfect game. The Marchand-Bergeron-Pastrnak trio, which leads the Bruins’ power play (0-for-13 over four games), not only failed to score on four manpower advantages, but the unit also gave up a goal.

That came at 4:59 of the second period, just 21 seconds after Charlie Coyle had put the Bruins ahead, 2-1, and went on the power play because the Hurricanes unsuccessfully challenged the goal.

Pastrnak’s risky point-to-point pass was picked off by Brock McGinn, who beat Tuukka Rask (25 saves) on a shorthanded breakaway.

Brock McGinn scores a filthy breakaway shorthanded goal to tie it up for the Hurricanes (+120). pic.twitter.com/TjsYakHMX4

For the most part, though, the Bruins’ No. 1 line played like the unit that includes the NHL’s co-leader in regular-season goals (Pastrnak, 48), the league’s sixth-best scorer (Marchand, 87 points over 70 games) and one of the game’s premiere two-way centers in Bergeron, who is a finalist for the NHL’s Selke Trophy (best defensive forward) for the ninth year in a row.

“In overtime, that’s them,” coach Bruce Cassidy said of the game-winning play, on which Pastrnak and Marchand (two assists) traded passes on a rush until Pastrnak got the puck to Bergeron for a shot that beat Petr Mrazek (36 saves) from the right circle. “The faceoff play (Bergeron won a draw to Marchand, who fed cross-crease to the Pastrnak goal that made it 1-1 with 2:15 left in the first period) was them.

“They missed a little bit of that in the round robin. Tonight, they know a little more is at stake. Put those two factors together, and we knew they’d be there, competing — and competing at a high level. And when they do that, they’re so talented and smart that things are going to happen for them.”

Cassidy felt that expectations for the top line may have been at least a little unreasonable coming out of the mid-March to mid-July pause, because Pastrnak missed two weeks of practice while satisfying quarantine regulations upon his return to Boston from the Czech Republic.

The trio knew it couldn’t take too much longer to get untracked, though. The Bruins see the Hurricanes as a more formidable opponent than the team they swept in last year’s Eastern Conference Final, and didn’t want to give them any confidence.

“I think we got better as the round robin went on,” Bergeron said, “but obviously, you want more. You want to keep getting better and taking the next steps, especially when we thought that (Wednesday) was a really important game, starting Round 1.”

Game 2 is scheduled for 8 p.m. on Thursday night.