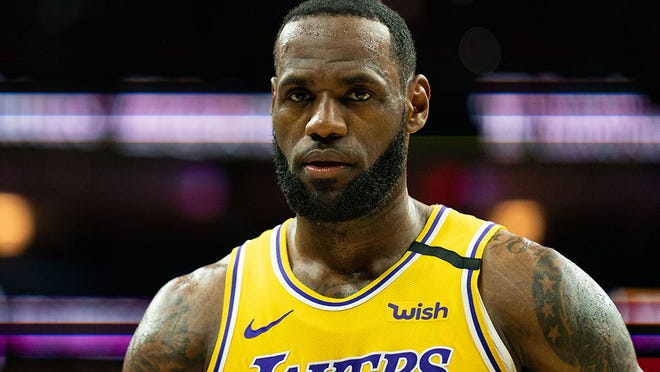 
LOS ANGELES — As he scanned the NBA’s all-time assists list, Jason Kidd quickly realized something. The Los Angeles Lakers’ assistant coach believes LeBron James can surpass him for No. 2 on the list.

“I’m all for it. That means guys are making shots,” Kidd told USA TODAY Sports. “That’s why I hope I’m in play.”

Will that be in play?

James, who will play in his 17th NBA All-Star game Sunday in Chicago partly because he has averaged a career-high 10.8 assists per game, would have to play at least eight more seasons to surpass Stockton’s record. That projection is based on James maintaining his current averages and playing all 82 games for the rest of his career.

“LeBron is going to be top four or five when it’s all said and done,” Paul told USA TODAY Sports. “Knowing him, he’s got the possibility to get top two or three. But he won’t get one.”

What would it take for James to meet Paul’s expectations?

“With LeBron, everything depends on how long he plays,” former point guard Isiah Thomas told USA TODAY Sports. “The longer he plays, the more numbers he’ll rack up. The way the stuff breaks down now, statistically it always favors the person who plays the most years. Not necessarily who was the best.”

Still, James has shown he can maintain longevity and production. Though James missed a combined 27 games last season, he avoided sitting for more than 10 games in 14 of his previous 15 seasons. Assuming James stays healthy, where would he end up on the list?

James, who is under contract with the Lakers through the 2021-22 season, would need to play at least four more seasons to surpass Kidd and two more seasons to top Nash and Jackson. James could eclipse Johnson and Robertson sometime next season. And James will either supplant Paul toward the end of this season or early next season.

When Paul entered the league in 2005, one of his goals was to surpass Stockton. But Paul, now 34, has missed a combined 69 games in the past 3½ seasons.

“If we’re able to hit a milestone throughout the course of this marathon, we acknowledge one another,” James told reporters earlier this season. “We congratulate one another. But it never goes to the trash-talking side. It’s never been in our DNA.”

‘The right way to play’

That DNA partly explains what has allowed James to climb so high on the list.

That started when James played on his first rec-league basketball team with the Summit Lake Community Center Hornets. Coach Frank Walker told a 9-year-old James, “it’s a much greater reward seeing some of your teammates that can’t dribble or can’t score for themselves, for you to get them an open look.”

“It’s the greatest part of basketball, to be able to see the ball move from side-to-side, to be able to attract the defense and get your teammates an open shot,” James said. “I just knew that was the right way to play.”

As he progressed through St. Vincent High School and in the NBA, James soon had a distinguishable advantage. He had quick decision making that most traditional point guards show, but with a 6-foot-9, 250-pound frame. Such qualities helped James climb into the top 10 this season by eclipsing Gary Payton (8,966 assists) and Thomas (9,061).

“He’s almost like Magic. They’re big and can oversee everybody,” Payton told USA TODAY Sports. “He has a good knack for passing the basketball and getting people the ball at the right situation.”

Not everyone agreed with James’ approach.

During his first stint with the Cleveland Cavaliers and then the Miami Heat, James often fielded criticism for passing up shots. Some argued superstars should take over in crunch time, regardless of the swarming defensive coverages they face.

He found it better to find the open man than just rely on his talent. The most notable example came in Game 1 of the 2007 Eastern Conference Finals between Cleveland and the Detroit Pistons. With the Cavs trailing by two with 12 seconds left, James drove to the basket only to meet a double team. So he dished the ball to a wide-open Donyell Marshall behind the perimeter, who missed the potential game-winning 3-pointer.

“I thought he made the right decision,” Kidd said of James. “He caught heat for it that he could lay the ball in. But his basketball IQ could never be questioned. It’s about making the right play.”

Nearly 13 years later, James still makes the right play. Before the season started, James proclaimed that the Lakers’ offense should mostly center around Anthony Davis. James has thrown countless lobs and full-court passes to Davis. And this season, James became the ninth player in NBA history to record at least 9,000 assists less than a month after surpassing Kobe Bryant for third place on the NBA’s all-time scoring list (33,677).

Not everything has gone perfectly.

Kidd has chastised James for his 3.9 turnovers per game. He often stresses the importance of knowing the difference between passes that lead to “touchdowns over interceptions.” Given James’ skillset, though, the Lakers mostly defer to his decision making. James has become more inclined to pass this season partly to preserve his workload and prolong his longevity.

“My teammates and the coaching staff trust me to play the point and run the show,” James said. “It’s my job to take care of the ball, just try to put guys in position to be successful and put the ball on time and on target.”

James has done that well enough to be considered one of the NBA’s best passers ever.

“He does the right thing,” Kidd said. “He knows how to play the game. He’s playing chess.”