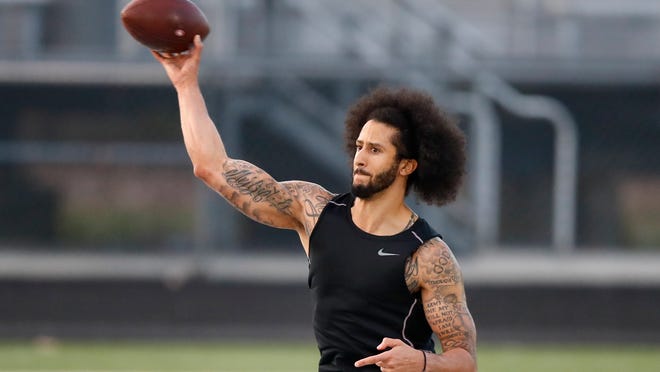 
Colin Kaepernick has spoken. He’s been writing, too.

The former NFL quarterback, who has been effectively blackballed by the league and its owners, discussed in an exclusive interview with USA TODAY Sports’ Jarrett Bell his first book — a memoir set to hit shelves this year through his new company, Kaepernick Publishing.

Kaepernick’s fight against systematic oppression, particularly police brutality against African-Americans among other social justice issues, went mainstream during the 2016 season, when he began kneeling during the national anthem to demonstrate protest.

While the book does not yet have a title, it will focus plenty on what the last few years have been like for him. Here are three things we learned from his conversation with USA TODAY Sports.

Colin Kaepernick wants to play in the NFL again

Kaepernick last appeared in the NFL in 2016; all 32 teams have passed on the chance to sign him since he became a free agent in March 2017. Nonetheless, Kaepernick is keeping his dream of playing professional football at the highest level alive.

“My desire to play football is still there,” Kaepernick said. “I still train five days a week. I’m ready to go, I’m ready for a phone call, tryout, workout at any point in time. I’m still waiting on the owners and their partners to stop running from this situation. So, I hope I get a call this offseason. I’ll be looking forward to it.”

This past fall, Kaepernick and the league initially agreed to hold an individual workout for him at the Atlanta Falcons facility. That fell through over a dispute regarding a waiver he would have needed to sign, so Kaepernick moved the showcase nearly an hour away and threw in front of several teams.

SPORTS NEWS, DELIVERED:Get each day’s top stories in your inbox!

Kaepernick told USA TODAY Sports that the autobiography of Malcolm X changed his life, and that he gives a copy of the book to every youth who attends his Know Your Rights camp.

“Black literature was something that was key to developing my own thoughts and ideas of how to navigate the spaces that I enter,” he said. “So, I not only wanted to give insight into what led me to protest through my memoir, I wanted to make sure I was able to retain the ownership over my story in the process.”

Colin Kaepernick wants to control his own narrative

By this point, everyone has his or her own opinion when it comes to Kaepernick’s decision to protest and his subsequent ouster from the league.

Once again invoking Malcolm X,  Kaepernick said in order to combat the “distortion of stories” he found it wise to start his own publishing company to control the narrative.

“Recognizing the importance of our community being able to control our own narratives and tell our own stories, this is something I thought had to be the next stepping-stone for us to properly address and identify not only how we view ourselves, view our communities and how we tell our stories, but also giving the world to view us in the way that we want them to as well,” he said.