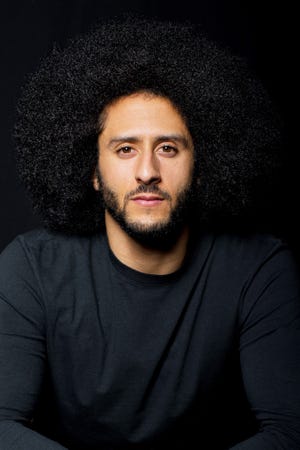 On his new memoir and hopes for NFL return


Colin Kaepernick’s voice is getting stronger.

That much is clear as the former NFL quarterback plans to announce Thursday he is writing a memoir to be released this year through his newly formed company, Kaepernick Publishing.

“I learned early on that in fighting against systematic oppression, dehumanization and colonization, who controls the narrative shapes the reality of how the world views society,” Kaepernick said Tuesday in an exclusive interview with USA TODAY Sports. “It controls who’s loved, who’s hated, who’s degraded and who’s celebrated.”

Kaepernick, 32, has been unsigned by NFL teams since 2017 after he protested police brutality against African Americans and other social injustices by kneeling during the national anthem the previous season as a member of the San Francisco 49ers.

His yet-to-be-named memoir should fill in the gaps of the past few years, as well as provide more insight on the motivation and methods behind his activism. Though  Kaepernick has been engaged in self-empowerment efforts for black and brown people through his Know Your Rights Camps, he has rarely conducted news media interviews or been available in other public forums.

Undoubtedly, many will want to hear from Kaepernick, who despite being shunned by NFL teams has become a prominent cultural figure – especially among African Americans.

“I’ve had a lot of questions surrounding what got me to the point of protesting,” he said. “Why did I do it? Why did I do it at that moment? Why wasn’t it earlier in my career? A lot of questions surrounding what led me to that point. Which led me to wanting to share that story and give insight. So I think there’s a lot of interest around it, but time will tell when the book comes out.”

OPINION:Kaepernick doesn’t exactly loom over the NFL at Super Bowl, but he’s certainly not forgotten

To that point, Kaepernick demonstrated some humility. He chuckled when it was suggested his book could be a bestseller.

If only the demand from NFL teams was so robust. After the fiasco of a hastily arranged NFL workout in Atlanta in November, Kaepernick is no closer to getting an NFL job – which is still a shame for a quarterback-needy league that often touts the virtues of meritocracy as lesser-talented prospects get opportunities.

The book and publishing company, Kaepernick insisted, don’t signal that he’s ready to give up hope of landing another opportunity with an NFL team. He said he sees the ventures as a parallel track to football.

After all, New England Patriots star Tom Brady has an enterprise with his TB12 book and training methods, and Seattle Seahawks phenom Russell Wilson has a production company (Why Not You Productions) with his wife, Ciara.

“My desire to play football is still there,” Kaepernick said. “I still train five days a week. I’m ready to go, I’m ready for a phone call, tryout, workout at any point in time. I’m still waiting on the owners and their partners to stop running from this situation. So I hope I get a call this offseason. I’ll be looking forward to it.”

In the meantime, he’s an impact player in a different form.

In addition to his memoir, Kaepernick struck a multi-project deal with Audible, a subsidiary of Amazon, to release the audio version of the book and content Kaepernick said will amplify the voices of other authors and creators.

Part of his motivation for creating the publishing company, Kaepernick explained, is to create opportunities for black and brown writers, authors and creators to control their narratives and retain ownership.

Kaepernick may have commanded a seven-figure advance had he shopped his memoir on the market. That route would not have fulfilled Kaepernick’s vision.

“I’ve always had an interest in books,” he said. “I’ve had an interest in black literature. ‘The Autobiography of Malcolm X’ was a book that changed my life, so much that every Know Your Rights camp that we have, we give the book to all of the youth that attend. And black literature was something that was key to developing my own thoughts and ideas of how to navigate the spaces that I enter. So I not only wanted to give insight into what led me to protest through my memoir, I wanted to make sure I was able to retain the ownership over my story in the process.”

“I realized being able to control your narrative and tell your story the way you want to is very important,” Kaepernick said. “The manipulation, the colonization, the distortion of stories, narrative, history, has been done forever. This is a way for me to be able to counteract that and begin to decolonize that and centralize the narrative of not only myself but other black and brown writers and authors.

“One of the quotes that comes to mind is Malcolm X’s quote, ‘If you’re not careful, the newspapers will have you hating the people that are being oppressed and loving the people that are doing the oppressing.’ He’s speaking to the control of the narrative. So for me recognizing the importance of our community being able to control our own narratives and tell our own stories, this is something I thought had to be the next steppingstone for us to properly address and identify not only how we view ourselves, view our communities and how we tell our stories but also giving the world to view us in the way that we want them to as well.”